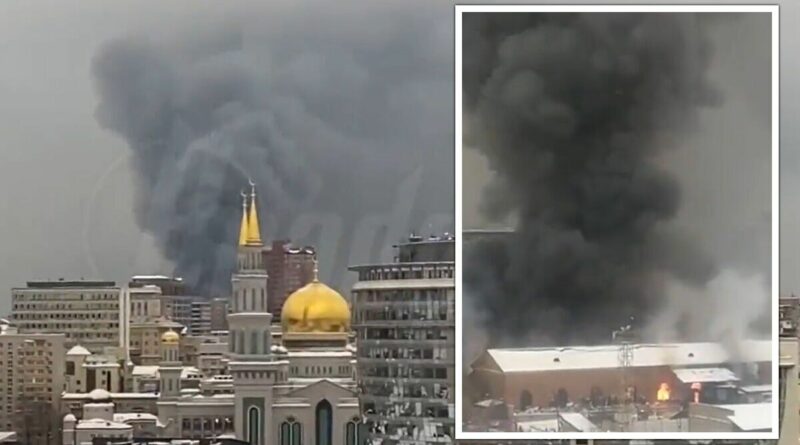 Central Moscow was rocked yesterday by a large warehouse fire that killed at least five people, Russian emergency services said. Reports suggest the fire had been preceded by an explosion.

Officials said the fire broke out at a two-story brick building on Sunday afternoon, and was extinguished late on Sunday evening.

The warehouse, in Komsomolskaya Square, sits close to rail termini in the Russian capital that link it with other large cities, St Petersburg, Kazan and Vladivostok.

Moscow’s branch of the Emergency Situations Ministry (Emercom) said the fire had caused the partial collapse of the building’s ceiling between its two floors.

The agency added that alongside the five dead, one person had been injured.

The fire in the industrial building covered a total size of around 2,000 square metres, and Emercom said that there was “heavy smoke” all along its footprint.

Footage posted online shows a thick plume of dark smoke rising above the city, with a chorus of sirens audible in the background.

Other video – apparently shot from a nearby tower block – shows the column of black smoke pouring out of a central section of the warehouse, with flames visible through facing windows.

Local reports suggest that some of those caught up in the flames may have become trapped in nearby greenhouses.

Emercom told Russian news agencies that 80 fire fighters and 20 fire units had been involved in extinguishing the inferno, along with a helicopter on standby.

It attributed the cause of the blaze to “violations of fire standards”.

Large fires are fairly commonplace in Russia, and are typically attributed to ageing buildings and infrastructure, as well as a laxed attitude to safety requirements.

At the start of this month, at least 13 people were killed after a large fire broke out in a recreation centre in Kostroma, 210 miles north of Moscow.

At the time, local officials said the fire began after a patron apparently fired a flare gun inside the building, leading to the roof collapsing. A further five were left injured by the blaze.

A 23-year-old patron of Polygon – a venue used as a cafe, nightclub and bar – was arrested on suspicion of causing the fire, an allegation he was believed to have admitted to.

The director of the company which manages the venue was also arrested.

Ikhtiyar Mirzoyev, a member of the regional legislature who owned the club, was later detained and charged over an alleged violation of fire safety standards.

He was also suspended from his public office, TASS news agency reported shortly after the incident.

Yesterday’s fire was not the first industrial blaze to plight the Russian capital, but rather the latest in a long line.

In August, a warehouse on the outskirts of Moscow went up in flames, pouring a towering column of black smoke over a motorway.

Two months before, a mechanical plant in Sergiev Posad, a satellite city of Moscow, caught fire.