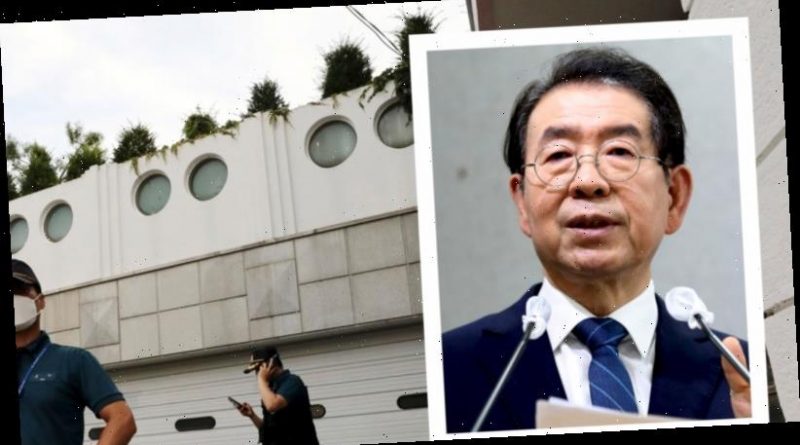 Seoul: A top human rights watchdog in South Korea has released a report confirming that the former mayor of Seoul, who disappeared in July only to later be found dead, had sexually harassed and verbally humiliated a secretary.

The National Human Rights Commission led an investigation into the allegations against the former mayor, Park Won-soon, whose body was found on a wooded hill in the South Korean capital just one day after one of his secretaries filed a police report accusing him of making unwanted physical advances and sending her obscene messages and photos late at night. 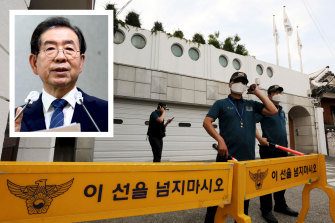 Police officers stand guard in front of the house of mayor Park Won-soon (inset) in Seoul after his death.Credit:AP

In a statement, the watchdog organisation said it found the victim’s allegations to be credible.

“Mayor Park’s sexual words and actions led to feelings of sexual humiliation or disgust,” the commission said, adding that the mayor’s behaviour amounted to sexual harassment.

On July 15, days after the mayor’s death, the Seoul government said it would form a fact-finding mission with women’s groups and experts on law and human rights to examine the victim’s accusations. Two of the groups tapped by the government, the Korea Sexual Violence Relief Centre and the Korea Women’s Hotline, said they would not participate. Instead, they appealed to the National Human Rights Commission to lead an independent investigation, which began in August. 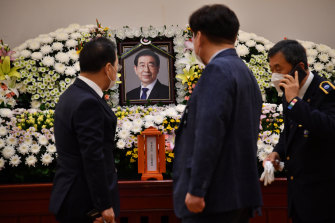 The results of the investigation included recommendations for the Seoul city government on how to conduct future investigations, and how to prevent further sexual abuse and harassment in the workplace. The report also found that traditionally patriarchal relationships in the mayor’s office had created conditions that led to harassment and abuse.

“Mayor Park had been a strong politician who was mentioned as a potential presidential candidate. On the other hand, the victim was a lower-level civil servant,” the report said. “It is clear that the two were in a hierarchical relationship according to status. Sexual harassment is likely to occur within the culture of the organisation based on patriarchal hierarchies and gender stereotypes. This case was not an exception.”

The acting mayor, Seo Jung-hyup, said in a statement that the city government would “humbly accept the results of the probe with an attitude of self-reflection and introspection,” and promised to implement measures against sexual discrimination and sexual harassment.

By law, the criminal case against Park was closed upon his death in July. Last month, police closed an investigation into whether the former mayor’s co-workers had aided and abetted his predatory behaviour for a lack of evidence.

Police have not ruled on the cause of Park’s death, but before his disappearance, he wrote a note of apology to his family with instructions on where to scatter his ashes.

While his mindset at the time of his death is unknown, Park was once considered a champion of women’s rights and the second-most powerful official in Seoul after the country’s President. It is believed he killed himself one day after his secretary, whose name and other personal information have not been released, went to the police with her allegations.

In a statement released earlier this month, the secretary said she hoped the commission’s findings would put an end to any confusion around the case, even if the mayor could no longer be held accountable for his actions.

“I ask the commission to put to rest the confusion in our society by determining the facts,” she wrote. “Not to punish someone, but to save someone’s life.“

Since coming forward, the victim has faced a backlash for the mayor’s death, and some critics have tried to publicise her identity online. Earlier this month, a Seoul court sentenced an unidentified district official to 3½ years in prison for sexually assaulting the same woman.

South Korea has faced a series of sexual harassment cases among powerful politicians in recent years. Kim Jong-cheol resigned as chairman of the progressive Justice Party on Monday after admitting to sexually harassing a member of his party. Oh Keo-don, the former mayor of Busan, resigned in April after admitting to sexually assaulting a public servant in his office.

In its report, the National Human Rights Commission said other victims who come forward about harassment and abuse should be guaranteed an independent investigation.