A Twitter hoax has sparked chaos in Germany after claiming Angela Merkel’s coalition had fallen apart.

Bavaria’s Christian Social Union (CSU) was forced to deny it planned to dissolve its decades-old alliance with the Chancellor’s Christian Democrats.

The post on a hoax Twitter account came as Merkel holds tense negotiations with her coalition partners over immigration in a stand-off that could ultimately cost her job.

Mr Seehofer wants Germany to turn away all asylum seekers who arrive at its borders without identification papers. That risks further intensifying internal divisions within the EU as Italy turns away migrant boats that arrive at its shores. 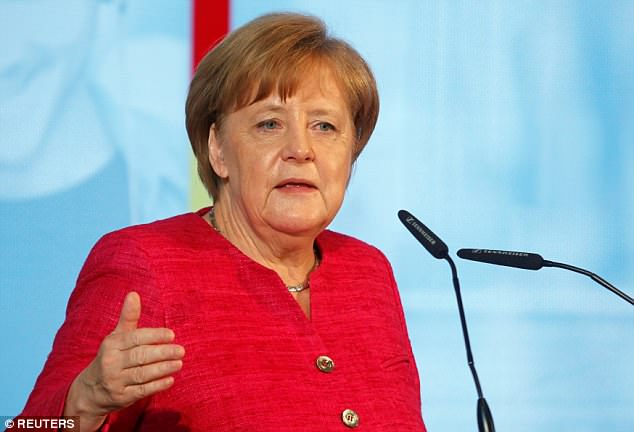 Hans Michelbach, deputy head of the CSU faction in the federal parliament, said the report was ‘rubbish’, stressing the CSU wanted to maintain its alliance with the CDU and preserve the coalition.

Earlier, a Twitter account claiming to be that of the Hessischer Rundfunk state broadcaster had said CSU Interior Minster Horst Seehofer had announced the end of the alliance in an internal message. Minutes later, the broadcaster confirmed the account was fake.

The incident comes with Merkel fighting to save her conservative coalition government in a heated battle over immigration.

An opinion poll Friday showed most Germans support the tougher line of her rebel interior minister.

The survey found that 62 per cent of respondents were in favour of turning back undocumented asylum seekers at the border, in line with the stance of Seehofer who is openly challenging Merkel.

And 86 per cent want faster deportations of rejected asylum seekers, a process now often held up by bureaucratic hurdles, according to the Infratest dimap poll.

The survey heightens pressure on Merkel, who has faced a backlash for allowing into Germany more than one million people fleeing war and misery in Syria, Iraq and elsewhere since 2015.

The mass influx sparked the rise of the far-right and anti-Islam AfD party, which entered parliament last September.

Merkel’s welcome to refugees also infuriated Seehofer and his CSU, the sister party of her Christian Democrats in the southern state of Bavaria, the main entry point for most arrivals.

In an unprecedented split between the CDU and CSU, Seehofer has openly defied Merkel with a demand to allow border police to turn back migrants who lack valid identity papers or are already registered in another EU country. 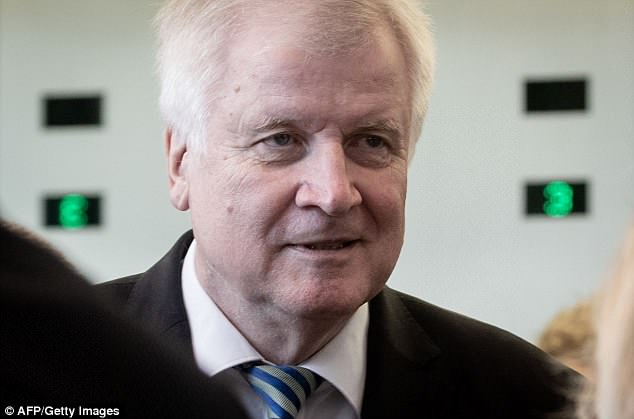 Earlier, a Twitter account claiming to be that of the Hessischer Rundfunk state broadcaster had said CSU Interior Minster Horst Seehofer (pictured) had announced the end of the alliance in an internal message. Minutes later, the broadcaster confirmed the account was fake

Merkel argues that Germany must not take the sudden and unilateral step of rejecting most asylum seekers at the border, which would heighten the burden for frontline countries like Italy, Greece and Spain.

She has pledged instead to seek bilateral agreements with these countries and a wider solution by the EU, which holds its next summit on June 28-29.

The CSU – which faces an election threat from the AfD in October state polls – has refused to budge and set Merkel an effective ultimatum of next Monday.

Seehofer will on that day seek CSU party backing to use his ministerial authority to order border police to turn back the asylum seekers.

For Merkel, in power for over 12 years, the stakes couldn’t be higher as she leads an uneasy coalition government with a narrow majority that took half a year to cobble together.

If Seehofer decides to go it alone, Merkel would have to fire him, sparking an unprecedented CDU-CSU split, political scientist Heinrich Oberreuter told business daily Handelsblatt.

In that scenario, Merkel could lead a minority government with the third party in the coalition, the Social Democrats (SPD), or call fresh elections that would likely benefit only the AfD, he said.

Amid the chaos, the SPD’s Finance Minister Olaf Scholz called for cool heads to prevail, tweeting that “the task of governing our country is serious and not an episode of Game of Thrones”.