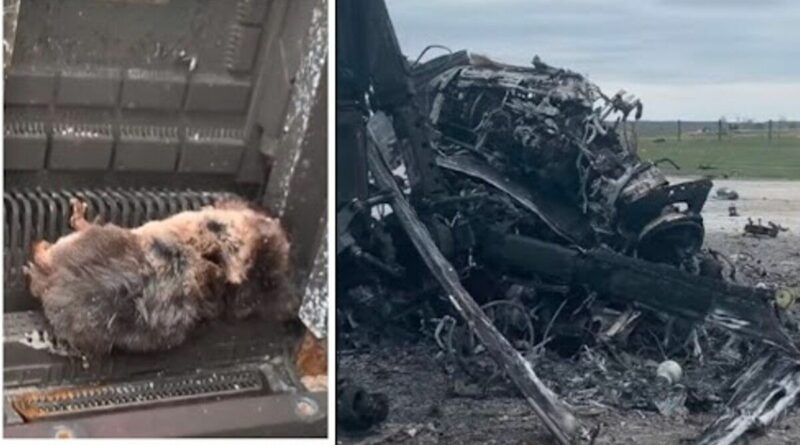 The discovery of the rodent has raised questions about sloppy Russian maintenance standards, as Moscow continues to suffer substantial losses to its military hardware. Recent data from Ukraine’s Armed Forces claims that Vladimir Putin’s military has lost 150 helicopters, as well as 171 planes and over 800 tanks. One helicopter to have recently bitten the dust was a KA-52, also known as the “Alligator”.

A photo of the destroyed “Alligator” was posted to Twitter by the user “Cargo-200”.

Along with images of the burnt-out wreck of the helicopter was a one of a dead mouse inside a control module.

“A dead mouse was found in the helicopter’s module.

“It’s telling how the Russian military maintenance is. RIP mousey!”

Some suspected the mouse brought down the KA-52 on its own, having chewed through the helicopter’s wires.

French user “Dalord Omer” said: “It was the mouse who, while messing with the wires of the plane, destroyed it.”

They added: “I know, the same thing happened to me with my washing machine, a mouse chewed the wires.”

It comes as Ukraine’s defence officials revealed that many of Russia’s so-called precision missiles are using Soviet-era electronics.

Victor Kovalenko, a former army officer, said engineers had discovered that Russian KH-55, KH-555 and KH-101 cruises missiles were using technology from the Cold War in their control and guiding systems.

He tweeted: “Everything is faked in Russia, even its ‘precise’ cruise missiles.

“Their navigation component PGI-2М is from 1977. That’s why most of the Rus. missiles don’t hit targets.”

The Russian army has suffered massive casualties in its ill-fated invasion of Ukraine.

Ukraine’s military claims that Putin’s forces have lost over 20,000 soldiers, with many more injured.

The Kremlin is desperately trying to fill the depleted ranks of its frontline troops, as it tries to take more territory in Ukraine’s east.

Reports have emerged that the Russian military and FSB are trying to forcibly mobilise young Ukrainians from the occupied territories of the Kharkiv, Kherson and Zaporizhzhia oblasts.

Ukraine’s Military Intelligence claimed the “recruits” were supposed to supplement Russian units “in the most problematical areas”.

They noted that the Kremlin was pushing ahead with its plans despite the pro-Ukrainian sentiments of the population in the occupied regions and the general motivation to resist the Russian invaders.

Ukrainian medics in areas under Russian control have also been forced to go to the frontline to help treat the wounded.

In the latest reported incident, junior medical staff from Vovchansk in the Kharkiv Oblast were told they would be shot if they refused to go.