Chicago authorities reported a violent weekend that saw at least five people killed and 34 others wounded in shootings across the city.

In the latest attack, a man was fatally shot on the city's Northwest Side on Sunday. Officers responded around 5:10 p.m. where they found a male unresponsive in a vehicle with multiple gunshot wounds, the Chicago Sun-Times reported.

He was pronounced dead at the scene. It's not clear if any suspects were apprehended. 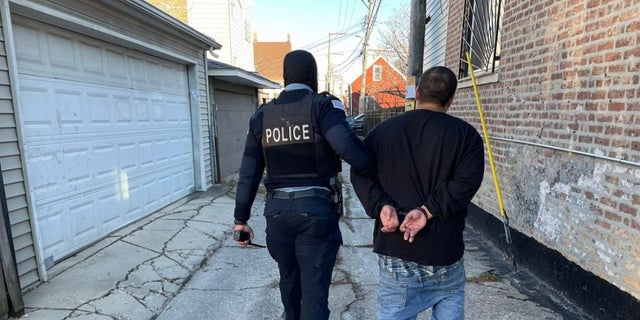 Chicago has seen an increase in shootings and murders in the first 11 months of 2020 compared to last year, according to police figures released Tuesday.
(Chicago Police Department)

The paper reported that a 17-year-old girl and three men were wounded Friday after a man opened fire on them from across the street, as they stood outside a residential building.

The girl suffered gunshot wounds to the leg and elbow, while two men, aged 40 and 53, were shot in the leg, authorities said. The fourth man, 55, was shot in the face and arm.

He attempted to drive himself to the hospital, before stopping his car in the 3300 block of West Congress Parkway. Fire officials would find his vehicle and transport him to a local area hospital, where he was listed in serious condition, according to the Chicago Sun-Times.

The shootings come after a violent Thanksgiving Day weekend in the city that saw at least 37 shooting victims, including nine who died from their injuries.

CHICAGO VIOLENCE UP BY HALF, 3,800 PEOPLE SHOT THIS YEAR

On Tuesday, Chicago PD reported 3,790 people were shot through Nov. 30, compared to 2,403 in the same time period last year. Murders increased by more than half, with 716 homicides through the end of November, compared to the 464 murders in 2019.

The paper reported last month that the city reached its 700th homicide for the year, however, the number of shootings and murders in November, while significant, reached a seven-month low. Still, murders in the city are also up 50% compared with 2019 and more police are being shot at, reports said.

City police officers were shot at more than 71 times this year, while other crimes have dropped by 7%, according to the paper.