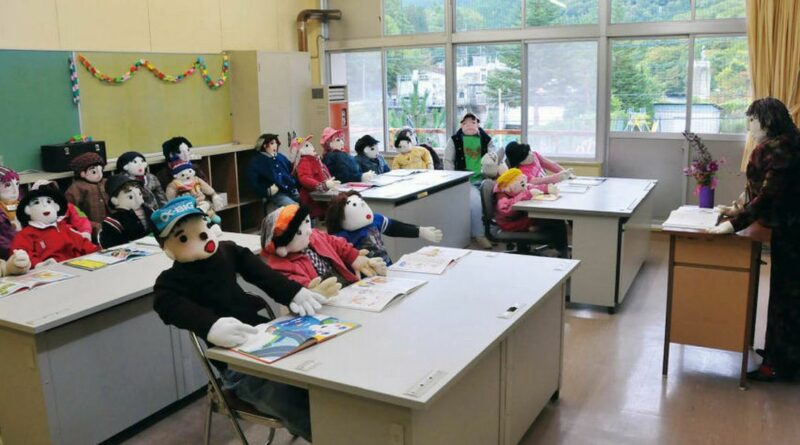 Sign up to the Chill newsletter for UK holiday inspiration

A woman who suffered from extreme loneliness after moving back to a childless village in Japan, has covered up the decreasing population with hundreds of creepy life-size dolls.

Ayano Tsukimi has replaced the dead with 350 handmade figures in Tokushima Prefecture on Shikoku Island which has since been dubbed the village of dolls.

The skilled doll maker had no idea her plan to fill her empty village, which is home to less than 30 residents, would become an unlikely tourist attraction, that has amassed around 3,000 visitors per year.

The village is now known for its creepy yet welcoming aesthetics, with smiley knitted models placed in different spots around Iya Valley, who now outnumber human residents ten-to-one.

What looks like elderly people gardening, and families waiting at a bus stop, are actually the figures up close, which have also taken over a derelict school.

Ayano managed to transform the shut down facility into an unofficial "museum" of pretend students after the last two elementary students graduated years and years ago.

The wide-eyed students have been made to look like they are listening to a teacher in a lesson, while scarecrows stand in the huge gymnasium.

Ayano confessed that her two-in-one plan to memorialise her father while deterring birds from taking seeds from the family plot, later turned into one of the world's most scariest tourist attractions.

When she was growing up in Nagoro, there were over 300 residents which included young people at the time.

So, in a bid to replace the dwindling population, she re-created her dead neighbour so she could talk to her, and the idea spiralled from there.

The talented resident says each doll is located in a different spot, with each destination based on where most likely resembles them.

The attraction has also been branded Japan's 'Scarecrow Village' after German film maker Fritz Schumann created a documentary on Ayano's work in 2014.

'Valley of Dolls' caused the village to become a must see destination which has led the doll maker to even offer workshops so others can create a figure.

Tourists can also expect to see an annual Scarecrow Festival that takes place every first Sunday of October.

They take around three days for Ayano to make and she utilises materials such as newspapers, cotton, buttons, wires and more.

She dresses them up in old clothes, which first began when she dressed the original scarecrow up in her fathers items.

Speaking to CNN travel, she said: "I never expected people from all over the world to come to this small village.

"Before the scarecrows, it was just an ordinary village no one really cared about.

"The reason why I came back was to take care of my father. If I get sick or old, I might go live with my children or other family in Osaka.

"But as long as I'm healthy, I'd like to stay in Nagoro, and continue making the scarecrows."