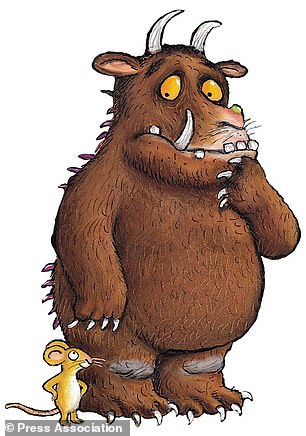 The Gruffalo is to feature on a coin soon

A 50p coin featuring the much-loved children’s character The Gruffalo is set to be released next week.

A banner on the Royal Mint website teases: ‘There’s someone coming out of the deep dark wood on 19 February 2019.’

It also says it is celebrating 20 years, and shows a Gruffalo holding a coin.

The Gruffalo, created by former children’s laureate Julia Donaldson and illustrator Axel Scheffler, has enchanted a generation of children for two decades.

The rhyming story of a mouse and a monster has sold more than 13.5 million copies across the world, according to publishers Pan Macmillan.

The Gruffalo is a monster – half grizzly bear and half buffalo – that lives in the woods, and befriends a mouse.

Token Publishing said they believe it will be available to buy.

They say: ‘It appears the latest 50p coin from the Royal Mint will feature the Gruffalo, Julia Donaldson’s scary but delightful monster who first appeared in 1999, and will be available from February 19.

‘We aren’t sure whether this will go into circulation like the Beatrix Potter and Paddington coins or remain for collectors only (as with the Snowman just before Christmas) – we’ll keep you posted!’