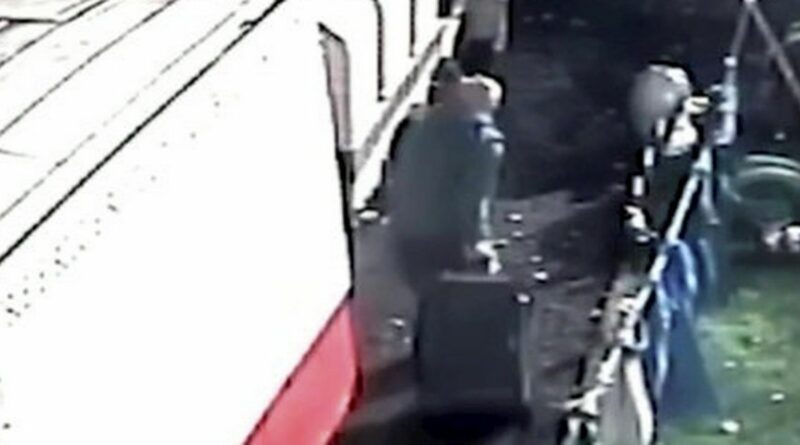 This is the chilling moment a man stuff his new wife's body in a suitcase and wheels her out of home a few days after their wedding.

Thomas Nutt, 46, was handed a life setence after murdering his wife and "dumping" her in a field near the house they lived in Halifax.

In a CCTV video released by West Yorkshire Police, Nutt and his wife, Dawn Walker, were seen returning to their home in Lightcliffe on on their wedding night, October 27, 2021.

Dawn, 52, who was still wearing her wedding dress, headed inside the house while Nutt was following behind.

A few days later, security camera footage showed Nutt left the home dragging a suitcase and later the same day, he returned to the garden and appeared to cover the wheel tracks in the mud.

West Yorkshire Police said: "On Sunday, October 31, 2021, a body of a woman was discovered in a suitcase near to Aysgarth Avenue in Lightcliffe in Calderdale.

"The body was later identified as that of Dawn Walker. Her husband Thomas Nutt was arrested and charged with her murder."

Bradford Crown Court heart Nutt had severely injured the victim's face and neck before strangling her, stuffing her body in a cupboard and going on holiday alone.

Following the murder, the groom even called the police to let them know his wife had gone missing and played along in a charade for days on end before eventually turning himself in.

Thomas Nutt was found guilty of murder by a jury at Bradford Crown Court on Monday, August 8, 2022.

He was sentenced on Friday (August 19) to life with a minimum term of 21 years.

Honour Judge Johnathan Rose said: "The impact of the sudden and violent death at a time which should have been filled with happiness will no doubt have an effect on those that knew her.

"The victim impact statements lay bare how this has been for them." He added: "It remains a mystery why you killed this woman who you had hours earlier took as your wife."

Dawn had previously been to the police over an assault she suffered at Nutt's hands but later tried to retract her statements, which Judge Rose told Nutt was "evidence of your control of a woman, even after you had used violence towards you and even after Kimberley Allcock warned her, a warning she tragically chose to ignore."