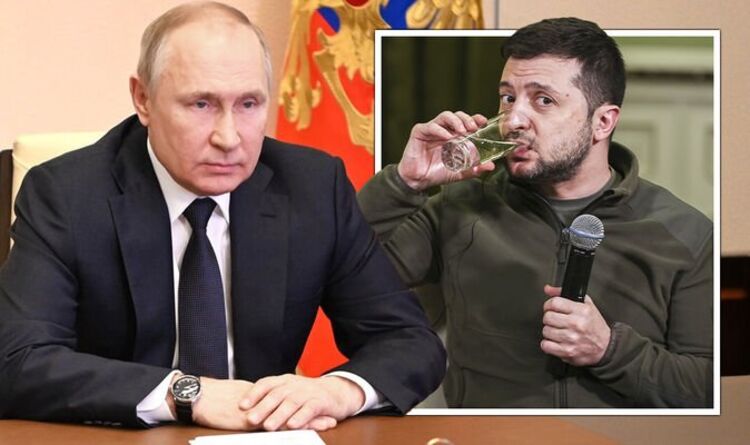 With the war now approaching the end of its third week, Mr Zelensky, hailed as a hero by many from around the world, has stood ground in Ukraine in the face of rumours on his head. Reports have suggested multiple assassination attempts have already failed, as well as others stating hit squads from both Africa and Chechnya are roaming the streets looking for the president.

Speaking on “Pod Save the World”, Tommy Vietor and Ben Rhodes suggest Mr Zelensky’s assassination will backfire on the Russian president.

In a podcast entitled The Rising Cost of Putin’s War, the pair question the Russian risk assessment on the “ghoulish” subject of hitting Mr Zelensky.

They say: “They may actually calculate Zelensky has become such an enormous figure they would trigger some reaction they might not want to trigger.

“So Zelensky may have calculated he’s become such a large figure, the cost of Russia harming him is going to be really high.

“Zelensky has in recent weeks made himself a singular figure in modern history.

“Him getting assassinated by some Russian crony could light Russia on fire.”

Others have suggested assassinating Mr Zelensky will not win the war for Russia.

Khrystyna Holynska, a Ukrainian academic and a policy researcher at the American think tank the Rand Corporation said: “Even if something happens to Zelensky, the national pride will not be affected.”

Speaking to “i” she added: “With every day passing by, the likelihood increases it might actually have the opposite effect of uniting the country even more for further resistance.”

Mr Zelensky has on several occasions posted videos of himself in Kyiv stating he will stay in the city. He previously said: “I’m staying in Kyiv. In my office. I’m not hiding and I’m not afraid of anyone.”

Twenty-four other Ukrainian officials are said to be on the Kremlin’s hit list, including both former boxing champions, the Klitschko brothers.

Though President Zelensky has insisted he will not turn his back on his country, Ukraine has reportedly begun to prepare for the possibility he will be assassinated.

Antony Blinken, the US Secretary of State, said on Sunday Ukraine has drawn up plans for “continuity in government” should anything happen to Mr Zelensky.

Experts believe a succession Government would simply carry the baton ignited by President Zelensky, who has instilled in the Ukrainian people a fierce nationalism even his assassination would not dampen.

Reports have emerged previous attempts on Mr Zelensky’s life have been thwarted by leaks from Russian intelligence officials sympathetic to Ukraine and opposed to the Russian invasion.

Speaking of Mr Zelensky’s resilience in staying, Ms Holynska ended: “Zelensky’s strong commitment to stay in Kyiv and lead the efforts has been praised both in Ukraine and abroad.

“His videos are disseminated and discussed widely, and they play an enormous role in keeping up the morale in Ukraine and motivation to support Ukrainians from abroad.

Will President Zelensky be assassinated? What will the reaction be if he is killed? Can Ukrainian momentum continue without him? Let us know your thoughts on the issue by CLICKING HERE and joining the debate in our comments section below – Every Voice Matters!

According to Mathieu Boulegue, a Russia research fellow at the Chatham House think tank: “Zelensky’s already a hero.”

He added: “Whether or not he will be turned into a martyr, I can’t tell you.

“Whatever the outcome for Zelensky, his defiance will completely boost the nation’s morale and the will to fight of every citizen of Ukraine.”