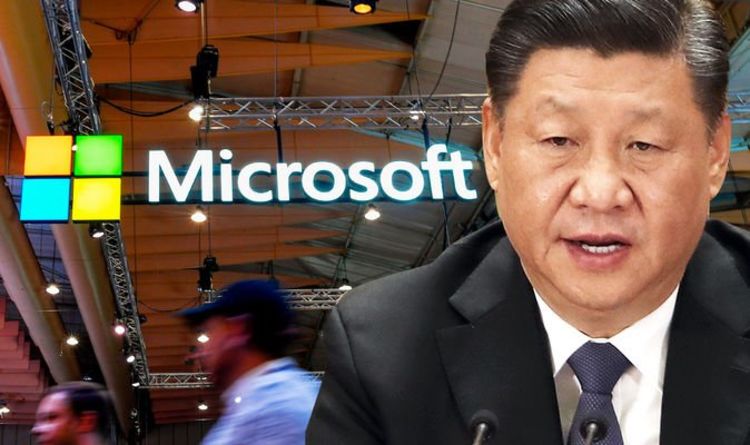 A group of Western countries, including the UK, the US, Australia and New Zealand – have accused Beijing of hacking the popular email platform, Microsoft Exchange. A joint statement accused the Chinese Ministry of State Security (MSS) of undermining global stability and security.

However, the Chinese Embassy in Wellington said the accusations were “groundless and irresponsible”.

A statement published by the embassy read: “The Chinese government is a staunch defender of cybersecurity.

“Making accusations without [proof] is malicious.”

The Chinese embassy in Australia also described Washington as the “world champion of malicious cyber attacks”.

According to the BBC, the Microsoft hack affected at least 30,000 organisations worldwide.

The tech giant blamed a Chinese cyber-espionage group for exploiting a vulnerability in Microsoft Exchange.

The attacks took place earlier this year, affecting over a quarter of a million servers across the world.

The group, known as Hafnium, was found by Microsoft’s Threat Intelligence Centre, to be state-sponsored and operating outside of China.

It is believed Hafnium obtained advanced knowledge that Microsoft intended to patch or close the vulnerability.

The hacking group then shared it with other China-based groups to maximise the benefit before it became obsolete.

US President Joe Biden said the Chinese government may not have been carrying out the attacks themselves but claimed Xi Jinping’s government were “protecting those who are doing it”.

He added: “And maybe even accommodating them being able to do it.”

Foreign Secretary Dominic Raab also said the cyberattack by “Chinese state-backed groups” was part of a “reckless but familiar pattern of behaviour”.

He raged in a statement: “The cyberattack on Microsoft Exchange Server by Chinese state-backed groups was a reckless but familiar pattern of behaviour.

“The Chinese Government must end this systematic cyber sabotage and can expect to be held accountable if it does not.”

At the time of the data hack earlier this year, “the UK quickly provided advice and recommended actions to those affected and Microsoft said that by the end of March that 92 percent of customers had patched against the vulnerability”.

The National Cyber Security Centre (NCSC) said it is “almost certain” the hack was initiated and exploited by a Chinese state-backed actor.

Director of operations Paul Chichester said: “The attack on Microsoft Exchange servers is another serious example of a malicious act by Chinese state-backed actors in cyberspace.

“This kind of behaviour is completely unacceptable, and alongside our partners, we will not hesitate to call it out when we see it.”

The US Department of Justice announced criminal charges against four MSS hackers.

They said the hackers were linked to a long-term campaign targetting foreign governments and entities in key sectors in at least a dozen countries.