China reported that its annual gross domestic product growth slumped from 8 per cent to 3 per cent last year. 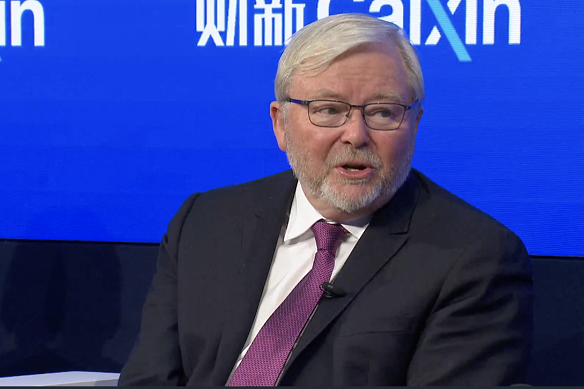 This constituted its second weakest economic performance in 50 years and was a direct result of China’s decision to pursue a zero Covid strategy, which President Xi Jinping suddenly abandoned earlier this year.

Rudd said the result was a best-case scenario, but possibly exaggerated.

“China obviously had no choice, zero Covid was not working for China’s growth numbers, the 2022 growth numbers were at best 3 per cent, possibly less,” he said.

“We do expect now a bounce back, the official numbers are probably around five [per cent].”

“I’m expecting a solid growth number for 2023, that’ll be good for China and importantly in a world where growth will be challenged with Europe facing recessionary challenges and the United States – question mark, in terms of how soft or hard the landing will be.

“And the rest of the world, the developing world, struggling.

“If China produces a solid growth number for 2023, five or five plus, that will actually underpin much global growth for the year to come,” he said.

The former prime minister was speaking at an event hosted by Chinese news website Caixin Media at the World Economic Forum in Davos.

Asked to describe in a single word China’s next chapter, the theme of his panel discussion, Rudd responded: “Still uncertain.”

He said that he planned to “flip up to Beijing” before taking on the post as Australia’s US ambassador in March.

“All I can say is that after three years China, we’ve missed you,” Rudd told the packed out event.

“I do love the place but three years since I’ve been there,” he said.

“So your question is, when am I going back? Maybe before I take up the new position in Washington, maybe next month.

“I’ve got to do an Asia Society event in Hong Kong so I may flip up to Beijing.”

Weng said China’s reopening was “high quality” and would be good for building stable supply chains and the development of high-level technology between Chinese and foreign companies as well as the “continous refinement of a fair and equitable order”.

“China will definitely maintain high-level growth, but we need reciprocity in our degrees of openness in order to make sure that our cooperation keeps moving forward on a stable footing,” Weng said.

He added that China’s enormous market provided “mutal benefits” to all.

Rudd, a fluent Mandarin speaker and also former foreign minister, said he had visited China up to 150 times during his lifetime. He was a senior diplomat for Australia in Beijing in the ’80s before he entered parliament and became prime minister in 2007.

He said if China and the United States could keep geopolitics “within a certain equilibrium” then we should see “reasonable [economic] growth”.

He said it was vital that the United States and China managed their five-year strategic competition in a way that didn’t allow to it to escalate into war. But he said that there would remain a high level of “technological decoupling” as the US and allies shunned or actively blocked the use of Chinese tech infrastructure such as Huawei telecommunications equipment.

“The challenge for geopolitics is can we find a stabilising mechanism to prevent it from escalating into some future crisis or war?” he said.

But he said he was encouraged by the recent meeting between US President Joe Biden and China’s Xi Jinping where he said the pair had taken “some tentative steps in that direction”.

“There is a predisposition to try and put some guard rails around this relationship … a new security safety net.

“So I think this is encouraging,” he said.

Asked if he was concerned about the incoming ambassador freewheeling on the international stage about issues like China, Prime Minister Anthony Albanese told Sky’s late-night host Chris Kenny that he had no qualms about the high-profile appointee.

“Kevin Rudd is fully aware of the responsibilities that he has. And he will fulfil them,” Albanese said.

“When Kevin Rudd is Australia’s ambassador that will be his sole focus,” the Prime Minister said.