No booze, bed at 9pm and bin the bathroom scales… Chloe Madeley and James Haskell reveal the secret rules of their punishing fitness regime

James Haskell and Chloe Madeley might be Britain’s fittest couple. Built like a pair of well-groomed racehorses, they are all pumped abs and bronzed biceps, flatteringly encased in fitness gear. They bound effortlessly around the gym, like toddlers in a soft play centre.

They got engaged last month, and were hard to miss among the guests at yesterday’s Royal Wedding at Windsor. For England rugby star James, 34, the bulk has been honed over the past 17 years as a professional sportsman, one known as much for his considerable talent as a flanker as for indiscipline and maverick straight-talking.

But for Chloe, 30, the daughter of television duo Richard Madeley and Judy Finnigan – who’s enjoyed a more chequered past in the shadow of her parents’ fame – it’s been a more recent revelation. 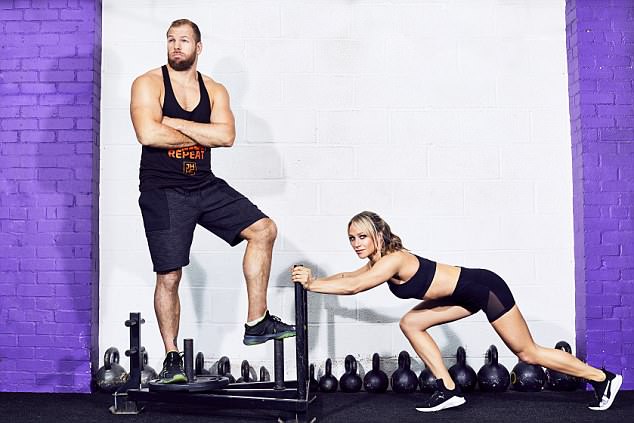 She appeared on TV shows such as Big Brother’s Little Brother and Dancing On Ice, while hitting the headlines for a drink-driving incident and cannabis use.

But in the six years since she discovered an unlikely passion for weightlifting, she has become an in-demand personal trainer, nutritionist and fitness model, with a bestselling fitness book and another on the way. Snaps of her well-defined muscles – including an enviably taught derriere – are regularly posted on Instagram to her 180,000 followers.

All this social media presence has brought negative as well as positive attention. The pair are castigated, often unfairly, as narcissistic attention-seekers, with Chloe criticised for gaining ‘unfeminine’ muscle and flashing her flesh.

Richard Madeley has fired back to Chloe’s critics, with characteristic blitheness, that he is ‘VERY proud’ of his daughter, who ‘eats like a horse and trains like an Olympian’.

And the truth is, Chloe and James love what they do – and they don’t care what anyone else thinks.

In fact, speaking to Life today, they say that anyone can get in shape by following their basic exercise principles – as long as they are prepared to put in the effort. Muscles like theirs do not appear by magic. Nor is their advice sugar-coated.

While social-media sites such as Instagram have been pilloried for giving people unrealistic expectations, Chloe has a refreshing commitment to honesty, and is determinedly aware of the responsibility she has to women.

Of bathroom scales, for example, she counsels: ‘Chuck the f***ers.’ Of the feted ‘thigh gap’, she blasts: ‘All it means is that you have a wide hip-bone structure, not that you work hard in the gym so, really, get over it.’

Chloe counts calories but enjoys treats, and when she achieves results, it’s via a process of hard work and dedication.

‘There’s a big misconception in my industry that I’m trying to change,’ she sighs. ‘It makes me angry that people think there’s a specific way women should look. If I’m in training for a fitness shoot I need to be in aesthetic shape, which means lowering my body fat. Do I look like that all the time? Of course not. Women feel pressured to always look a certain way and I certainly don’t want to keep that up all year round. I couldn’t.’ 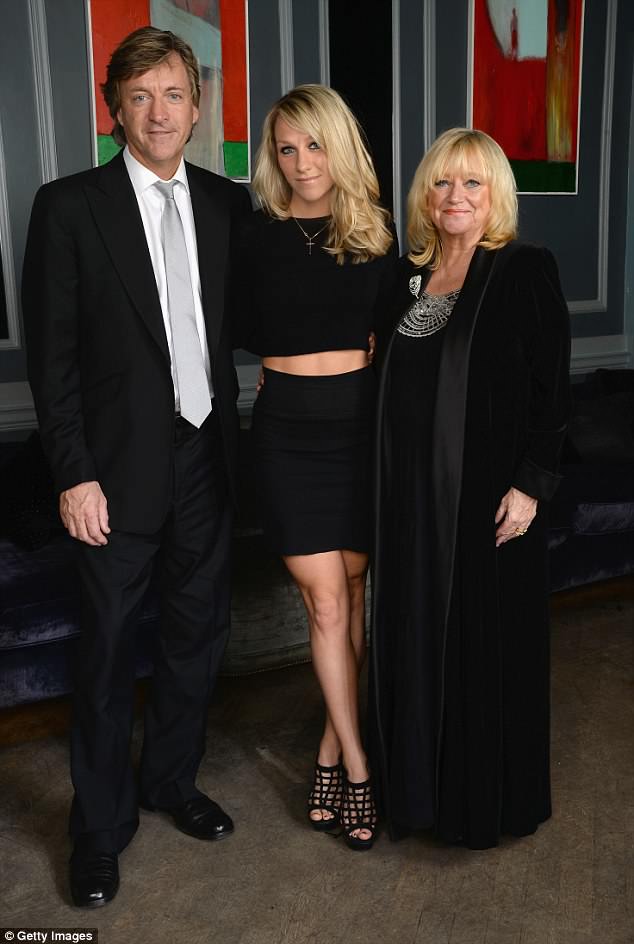 Chloe accepts Instagram has become part of the ‘body-shaming’ culture. It’s why she uses pictures of herself both when she’s training and when she’s not, for added realism. ‘I’m really pro varying ideas of beauty,’ she explains. ‘It’s just body shape. We’re all different, and everyone has a different goal.

But Chloe’s honesty is, she says, unusual. ‘Someone very well-known in the celebrity fitness world said to me, “Oh my God, do you actually train every day? I never go to the gym; I just lie and tell everyone I do.” Everyone’s using this perfect snapshot of life but it’s all a myth.’

James, too, is infuriated at the dishonesty he sees in the industry.

‘With social media, there are so many false idols. People who claim to be gurus but don’t do what they preach. There are these fitness DVDs where people get fat and are then starved to make money.’

People such as Gogglebox and Saturday Night Takeaway star Scarlett Moffatt, for example, whose weight loss for her fitness DVD was recently linked to an extreme low-calorie diet and a Swiss boot camp? James won’t name names.

But he insists: ‘What Chloe does is attainable, if you’re willing to put in the work. Most people will buy fitness juice and some device that promises weight loss rather than train hard.’

It’s possible that Chloe and James could come across on social-media platforms as intimidating. But Chloe doesn’t see it that way. ‘People are more likely to find us weird. Our friends and family are happy for me that I’ve found something I love. They remember me as a troubled little bunny, when I didn’t know what I wanted to do and I was really anxious and unhappy and now I’m doing really well and feel really good about my life, with someone who’s similar to me.’

The couple met in November 2014 after a video on Twitter of Chloe weightlifting caught James’s eye. He pursued her and eventually won her over, despite Chloe’s stated determination to stay single. 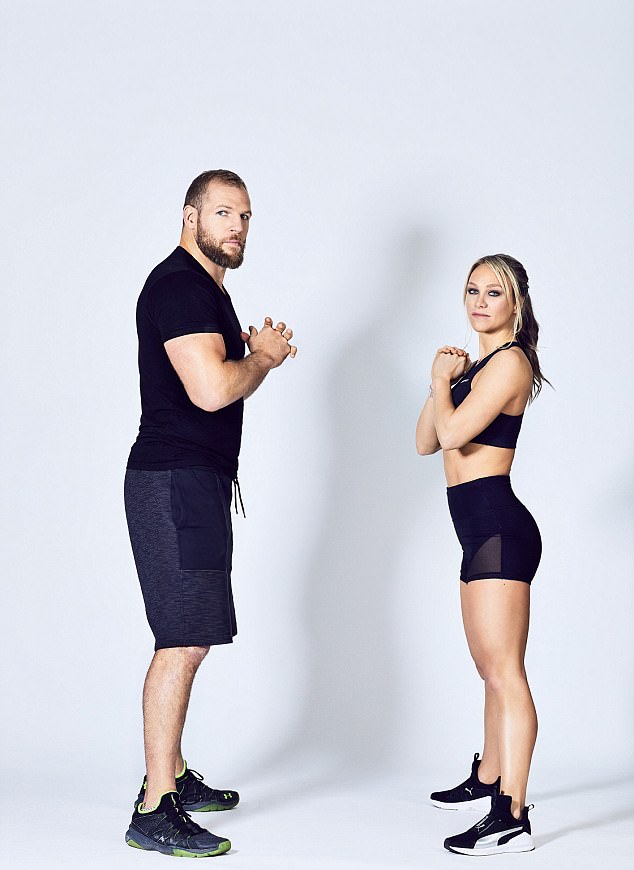 It’s possible that Chloe and James could come across on social-media platforms as intimidating. But Chloe doesn’t see it that way

But while fitness rules their lives, the couple don’t train together because their goals are different – and they don’t have time.

A typical weekday begins when the alarm goes off at 7am and Chloe makes a takeaway breakfast for James – usually oats and protein powder, but sometimes bagels and eggs. Both will have an Actimel probiotic drink, and a turmeric shot. The couple will share a coffee made by James, a ‘coffee nut’ who has a top-notch coffee machine and has taken a barista course. James will drive to his club training ground at Northampton Saints – while Chloe hits the gym, spending up to an hour weight-training and, if she’s preparing for a shoot, topping it up with a cardio session of squat jumps or on the treadmill.

At her peak, she can dead-lift 95kg – nearly double her own body weight (James lifted 300kg in his heyday). The afternoon is spent working on her business, Fitness Fondue, and dealing with clients and admin. When James returns home at about 5pm, he’ll have a protein snack, often prawns, grilled halloumi and chorizo, before a dinner of steak or chicken with rice or pasta and vegetables.

The pair watch an episode of a box set – they’ve just finished The Sopranos and are now on Game Of Thrones – and are in bed by 9pm. James is busy, too, with other commitments: after-dinner speeches, fitness books, and DJ-ing.

On holiday they can have more fun. They’ll allow themselves alcohol and a cigar, and will design workouts together in the hotel gym, on the beach or in the pool.

Chloe says James gets along famously with her parents, but they won’t be training together any time soon. Judy recently lost weight, but Chloe insists it had nothing to do with her. ‘They stay active – they both like walking – but while they’re interested in what I do and supportive, they’re not into it.’

James and Richard ‘love each other’, Chloe says – but it’s been a rocky road. James recalls: ‘I was there for Christmas and I popped my head around the kitchen door and Richard, who was cooking, told me to ‘f*** off’,’ James said. ‘I was mortified, but Chloe says he does it to everyone when he’s cooking – even Jamie Oliver once.’

Last month, James proposed in Paris, but a week beforehand he asked Richard’s permission at the Savoy hotel.

‘There were tears in his eyes when I asked, but I think he was just giving himself a Chinese burn,’ says James. ‘He did say he and Judy would be happy, pleased and proud to have me in the family. But I noticed he drank profusely afterwards – three whiskies in a row.’

The pair plan to marry in the South of France in 2020, after next year’s rugby World Cup for which James hopes to be picked.

Might there be kids on the horizon after the wedding? ‘I’d rather have a Ferrari or a Lamborghini,’ James jokes. ‘One of those cars wrapped in a bow, and a basket with two labrador puppies inside.’

Sadly, Chloe’s ‘not a dog person’. But the way things are going for this couple, he may well get his car.

Five ‘bod couple’ moves to get you started

Stand up straight, feet hip-width apart, toes pointed slightly outward, and squat as low as you can. Repeat for one minute, rest for one minute, and repeat a further four times (so a total of five times). Great for the lower body. 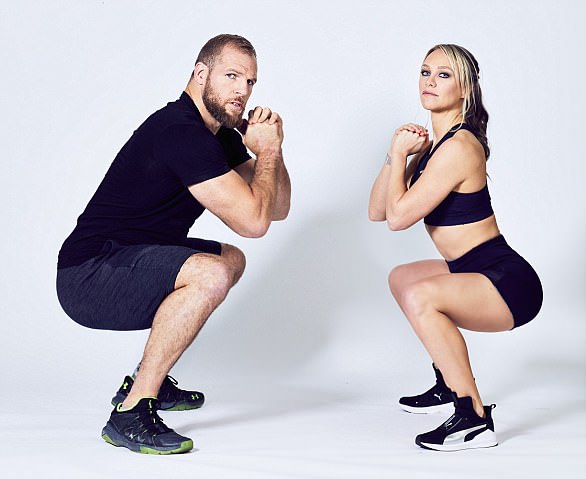 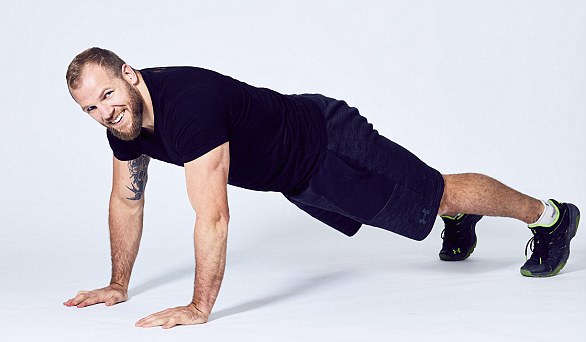 This will work your entire body. Stand up straight, then bend and crawl forwards on your hands, out into a push-up position. Perform a push-up (a shallow one if necessary). Walk yourself backwards and stand up again. Repeat for one minute, rest for one minute, and repeat a further four times (total: five). 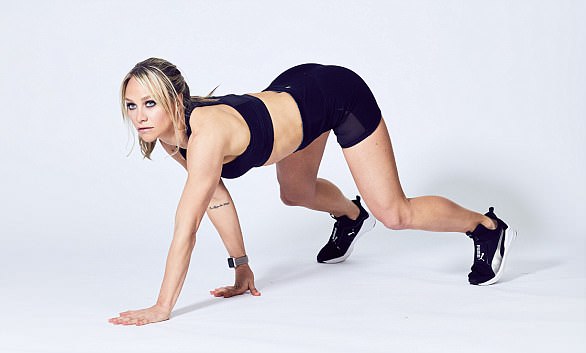 Stand up straight, squat as low as you can, and on rising, perform a gentle jump. When you land, drop back down into the squat position. Jump to exhaust (usually 20 to 30 seconds) and transition into a standing squat when necessary. Repeat for one minute, rest for one minute, and repeat a further four times (total: five). 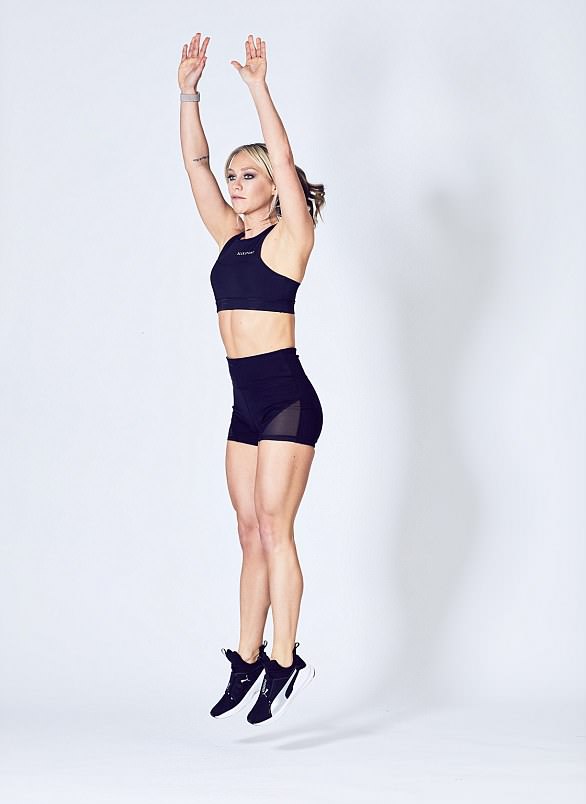 A great cardio workout for your whole body and to get your heart pumping. Crouch in a leapfrog position, and then, transferring your weight on to the flats of your hands, kick your legs out behind you so you end up in a push-up position. Jump your legs back into the leapfrog position and jump into the air like a firework. Repeat for one minute, rest for one minute, and repeat a further four times (total: five). 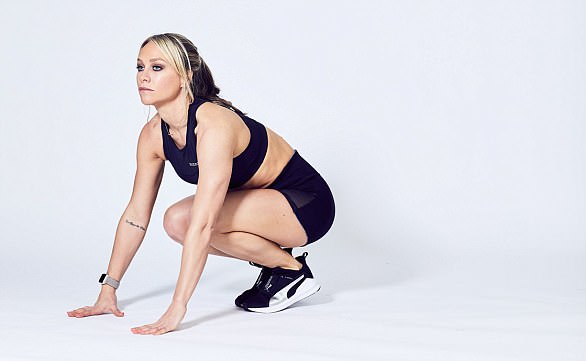