Inspectors have found evidence that chlorine was used as a chemical weapon in the Syrian town of Douma last year.

Dozens of civilians were killed in the attack on 7 April, 2018.

Survivors said they had been overwhelmed by the smell of chlorine, while many of the dead appeared to have suffocated after being found with foam around their mouths.

Britain, France and the United States responded by launching airstrikes against the Syrian government, which they blamed for what happened in Douma. Syria denied responsibility.

The Organisation for the Prohibition of Chemical Weapons (OPCW) visited the site to collect samples, interview witnesses and gather data.

After analysing the material, it said there were “reasonable grounds” to say the “use of a toxic chemical as a weapon” had taken place.

The OPCW said its mandate “does not include identifying who is responsible for alleged attacks”.

Its report will be shared with the UN Security Council. 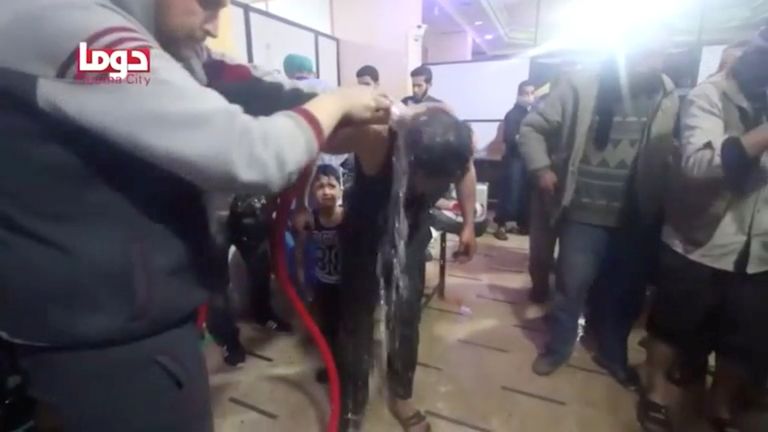 Russia has already rejected its findings. The Russian embassy in The Hague claimed the OPCW had come to its conclusions “in spite of all the evidence presented by Russia (and) Syria”.

The attack on Douma was the final target as the Syrian government fought to seize back control of the eastern Ghouta suburbs of Damascus from rebels.

Days after the alleged attack, militants gave the town up.

A joint investigative team between the United Nations and OPCW, set up in 2015, accused Syria of using chlorine gas in at least two attacks in 2014 and 2015.

It also said the nerve agent sarin had been used in an aerial attack on Khan Sheikhoun in April 2017.

That team has since been disbanded after Russia vetoed an extension of its mandate at the UN Security Council.