Chris Dawson has faced threats against his life by a “large number of people” since he was taken into custody on Tuesday for the murder of his first wife Lynette, his lawyer has told a court, as a sentence hearing date was set for November.

Dawson appeared in person in the NSW Supreme Court on Thursday morning wearing his prison-issued dark green tracksuit and a surgical mask. He was allowed to sit next to his lawyer Greg Walsh and two sheriff officers sat between him and the exit. 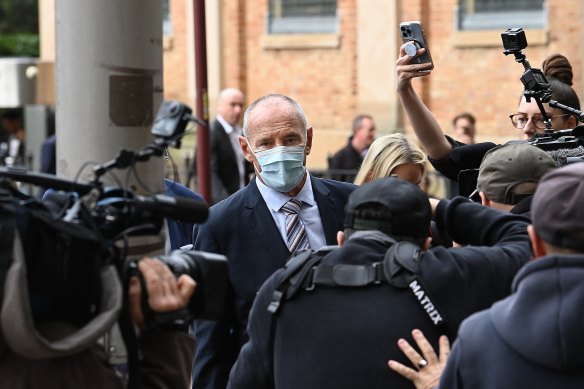 Chris Dawson arrives at court as a free man for the last time before the guilty verdict was delivered.Credit:Kate Geraghty

The 74-year-old was found guilty of Lynette’s murder by Justice Ian Harrison on Tuesday following a two-month trial and a judgment lasting almost five hours. Lynette, a mother-of-two, was 33 when she vanished from Sydney’s northern beaches. Her body has never been found.

The judge was satisfied beyond reasonable doubt that Dawson murdered Lynette on or about January 8, 1982, and that she did not voluntarily leave her home at Bayview. He found Dawson had a “possessive infatuation” with the babysitter and his former student, known as JC, which affected him significantly and he “resolved to kill his wife”.

Dawson’s solicitor Greg Walsh told the court on Thursday that, from the brief instructions he had been able to obtain from his client, “he has been subject to constant threats against his life”. 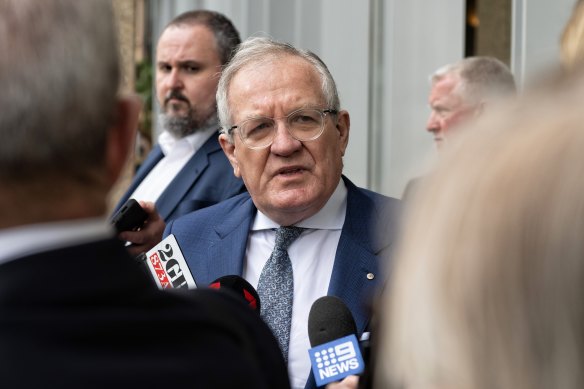 He asked the judge to direct prison authorities that every opportunity be given to affording Dawson protection, and sought continued non-association accommodation and access to mental health services during the “very sensitive time”.

Harrison said he did not have the power to direct them but rather make recommendations for immediate steps about Dawson’s protection “from people who think they know better than the law”.

“It may even be appropriate for you, with my blessing, to contact them today in anticipation of Mr Dawson returning to his accommodation later in the day. I can’t say that with enough force,” the judge said.

“He’s certainly entitled to be given all appropriate medical assistance.”

Walsh also confirmed, as a “matter of courtesy to the court”, that he would not be making a bail application for Dawson.

A sentence hearing date was set for November 11 with Crown prosecutor Craig Everson, SC, and Walsh agreeing that it would take about half a day.

Speaking to reporters outside court, Walsh said he had not had the chance to speak to Dawson at length but he “seems to have shut down”.

Walsh said there would have been no prospect for a bail application to have been successful.

“Giving it proper thought, I don’t believe there was any chance and there would be no point in making an application to this court in circumstances where it was doomed to failure,” he said.

Asked about matters to be raised at sentencing, Walsh said Dawson was an elderly man, had subjective problems relating to his cognitive functioning, there had been a decades-long delay in bringing the matter to trial, and his client “had never been in trouble before”.

“But, of course, the crime of which he’s been convicted is the most serious we know, in circumstances where he’s been found guilty of murdering his wife,” Walsh said.

“So he faces either life imprisonment or possibly a lesser sentence which nevertheless would mean that he will die in jail.”

Walsh said he would analyse the 268-page judgment on potential grounds of appeal.

“I could not express a proper view at this stage as to my level of confidence,” he said.

Among those seated in the public gallery on Thursday were Lynette’s nephew David Jenkins and Detective Senior Constable Daniel Poole, who arrested Dawson in Queensland in December 2018 and accompanied him on the plane to NSW.