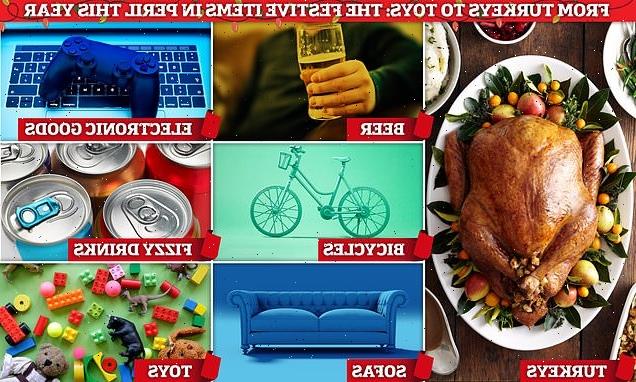 Christmas in peril with no turkey on the table or presents under the tree: Shoppers are warned poultry and beer could RUN OUT and the price of toys, bicycles, sofas and electronic goods will go up amid fuel and gas crisis

Shoppers have been warned that a raft of items are under threat this Christmas, from turkey to beer and electronic goods to bicycles amid the supply chain crisis.

British families may also struggle to find toys, sofas and fizzy drinks – and prices could rise thanks to the continuing labour shortages and shipping problems.

Retail analyst Clive Black warned turkeys could be replaced by nut roasts and many people will ask ‘what the hell is this’ when they look at their plate on Christmas Day.

It comes as drivers continue to queue for petrol amid concerns over the fuel supply chain, with industry experts fearing the problems could last for up to a month.

Business Secretary Kwasi Kwarteng has admitted the fuel crisis could hit the festival season as he revealed the Government’s reserve tanker fleet would be deployed.

Mr Black told The Times: ‘I expect Christmas will be a nightmare for consumers. There will be food on supermarket shelves but there will be a distinct lack of choice. 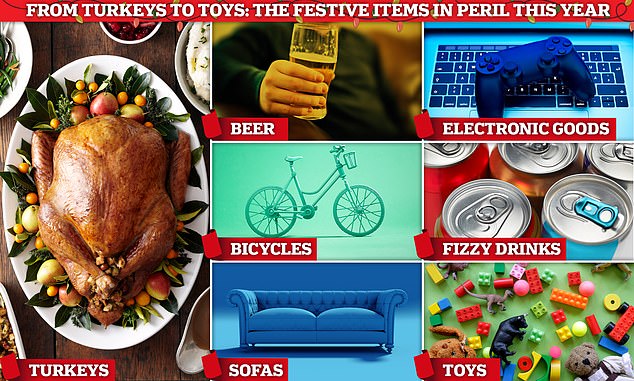 The Liverpool-based analyst with Shore Capital added: ‘A lot of people eating on Christmas Day will be asking ‘What the hell is this?’ It won’t be traditional.

Deputy Prime Minister Dominic Raab has suggested offenders who have been given community sentences could be used to address the country’s lack of HGV drivers amid continuing concerns about fuel shortages.

Mr Raab, who was made Justice Secretary in Prime Minister Boris Johnson’s recent ministerial reshuffle, has dismissed Labour’s call for 100,000 migrant visas to be issued to provide sufficient drivers.

The former Foreign Secretary said the move would leave the country reliant in the long term on labour coming from abroad, and instead suggested the gap could be filled in another way.

‘We’ve been getting prisoners and offenders to do volunteering and unpaid work,’ Mr Raab told The Spectator, in comments carried by The Times. ‘Why not if there are shortages encourage them to do paid work where there’s a benefit for the economy, benefit for society?

‘They may be eating other meats and nut roasts. Equally if the CO2 (carbon dioxide) problem does not settle, expect beer and carbonated soft drinks to be in short supply and a lot more expensive.’

He said Christmas is ‘going to be much pricier generally’ and predicted that shipping issues could bring shortages of toys, bikes, sofas and electronic goods.

Mr Black also blasted David Kennedy, the director-general for food at the Department for Environment, Food and Rural Affairs, for being ‘a disgrace’ – and bemoaned what he described as a ‘mismanagement of the economy’.

It comes after Mr Kwarteng was asked if the fuel crisis situation would continue in the run up to Christmas, and said: ‘I’m not guaranteeing anything; all I’m saying is that I think the situation is stabilising.’

On Sunday, Kate Martin, chairman of the Traditional Farm-fresh Turkey Association (TFTA), warned Britain of a shortage of Christmas turkeys amid unprecedented demand and a farm labour shortage.

She said that while small farms that use local workers and sell directly to customers have been less affected, supermarket supplies are likely to be hit by a shortage of skilled European employees after Brexit.

The TFTA represents around 40 farms producing free-range birds that meet the ‘Golden’ turkey quality assurance mark. It said some poultry farms have already had five times more orders this year than the same time in 2020.

Tesco has already warned that a shortage of delivery drivers, which is causing empty shelves, could lead to panic buying in the lead-up to Christmas.

The Government has announced a temporary visa scheme for 5,000 HGV drivers and 5,500 poultry workers brought in on three-month contracts to keep shelves stocked with turkeys and tackle fuel delivery difficulties.

It comes as Deputy Prime Minister Dominic Raab has suggested offenders who have been given community sentences could be used to address the country’s lack of HGV drivers amid continuing concerns about fuel shortages.

Panic buying sparked by concerns a lack of lorry drivers would prevent supplies reaching fuel pumps has brought long queues and pockets of aggression at petrol station forecourts over the last few days. 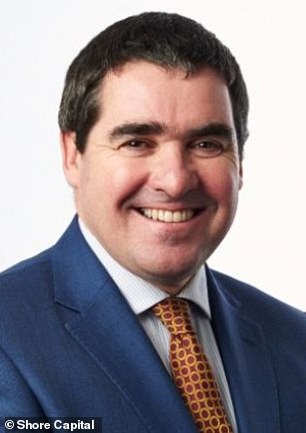 Mr Raab, who was made Justice Secretary in Prime Minister Boris Johnson’s recent ministerial reshuffle, has dismissed Labour’s call for 100,000 migrant visas to be issued to provide sufficient drivers.

The former Foreign Secretary said the move would leave the country reliant in the long term on labour coming from abroad, and instead suggested the gap could be filled in another way.

It comes as motorists say there is still not enough fuel despite The Petrol Retailers Association (PRA)’s latest survey of its members finding just over one-in-four had run dry, down from more than a third on Tuesday.

Ministers said they expected the situation to improve further, with the first troops driving tankers expected to appear on the roads ‘in the next couple of days’.

Some roads around London have become gridlocked as motorists hunted for stations that have fuel, with some carrying petrol cans, plastic jugs and water bottles to stock up, and there were even reports of violence in a handful of places.

PRA executive director Gordon Balmer said forecourt staff were being subjected to a ‘high level’ of physical and verbal abuse from frustrated motorists.