Home » World News » Church is locked and loaded for the Lord

The one-storey, low-slung building used to be St Anthony's Catholic Church. Before that, it was a community theatre, which is why there are no pews, only a semicircle of tiered seats facing the old stage, now an altar. 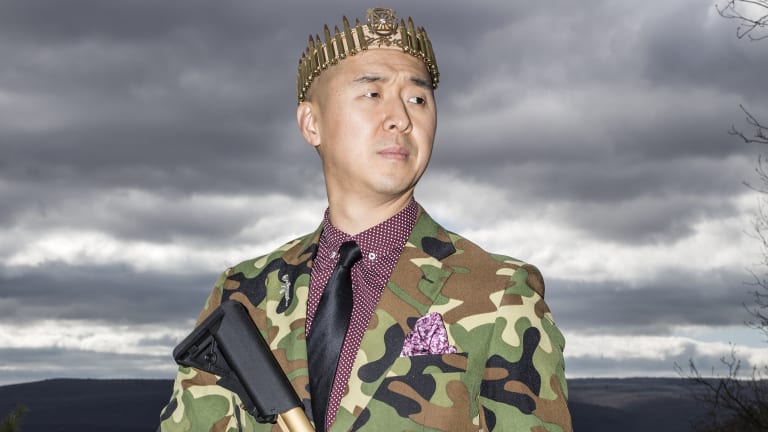 On a Sunday morning in late February, 38-year-old Pastor Hyung Jin "Sean" Moon, son of the late Reverend Sun Myung Moon, enters stage right wearing a white hoodie and cargo pants. He straps on a leather headband and picks up a microphone.

"OK, take it away," he says to the electric pianist and two female vocalists who function as the choir. They launch into the first of four songs: "O, light of grace, shining above / lighting my dim shadowed way …"

The 200-plus congregants pack into the room sang along with gusto. Pastor Sean stands by his front-row seat with his wife at his side, wringing his hands like an orchestra conductor. The song cycle ends and, after a brief prayer, he takes centre stage.

"Look at all these crowns of sovereignty!" he exclaims, gazing upon his audience. One tenet of the Sanctuary Church is that all people are independent kings and queens in God's Kingdom – a kind of don't-tread-on-me notion of personal sovereignty. Hence, symbolic gold and silver crowns bob on row after row of heads. 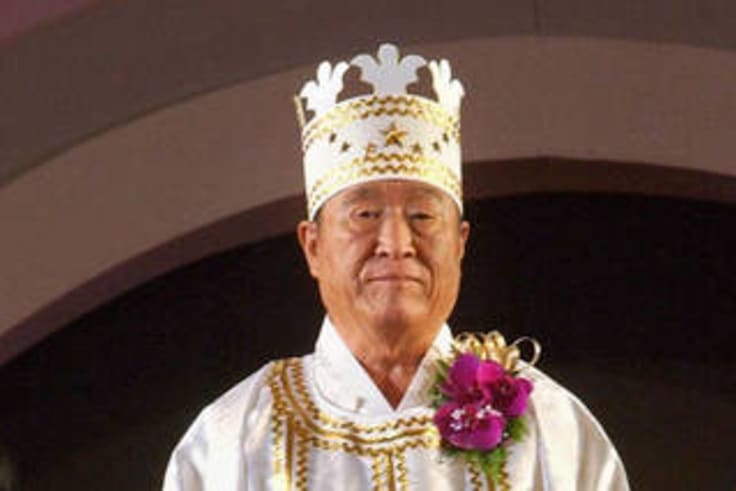 This crowd was about twice the usual size because this service was the warm-up for a renewal-of-marriage-vows ceremony scheduled for the following Wednesday. Scores of couples had already arrived from Japan and Korea. That ceremony – officially, the "Cosmic True Parents of Heaven, Earth and Humanity Cheon Il Guk Book of Life Registration Blessing" – would cap a week of activities that thus far had included an arts festival, a survival skills contest and a goat-butchering demonstration.

The wedding-blessing event was generating nationwide attention – something new for Sanctuary Church, which, until now, hadn't even registered on the radar of the Pocono Record, the local daily newspaper. A key pillar of Sanctuary dogma is the importance of owning a gun, particularly the lethal, lightweight AR-15 semi-automatic, which the National Rifle Association has proclaimed "the most popular rifle in America."

Last fall, Pastor Sean had studied the Book of Revelation. It makes multiple references to how Christ one day will rule his earthly kingdom "with a rod of iron". Although Revelation was written long before the advent of firearms, Pastor Sean concluded that "rod of iron" was Bible-speak for the AR-15 and that Christ, not being a "tyrant," will need armed sovereigns to help him keep the peace in his kingdom.

As a result, a recent Sanctuary Church news release had noted that "blessed couples are requested" to bring with them to the upcoming Book of Life ceremony an AR-15 semiautomatic rifle "or equivalents". This was unfortunate timing for the Church: The next day a young man walked into Marjory Stoneman Douglas High School in Parkland, Florida, and killed 17 people with an AR-15. Shooters had used that same model rifle to carry out mass murders in Las Vegas; Orlando, Florida; San Bernardino, California; and other cities. 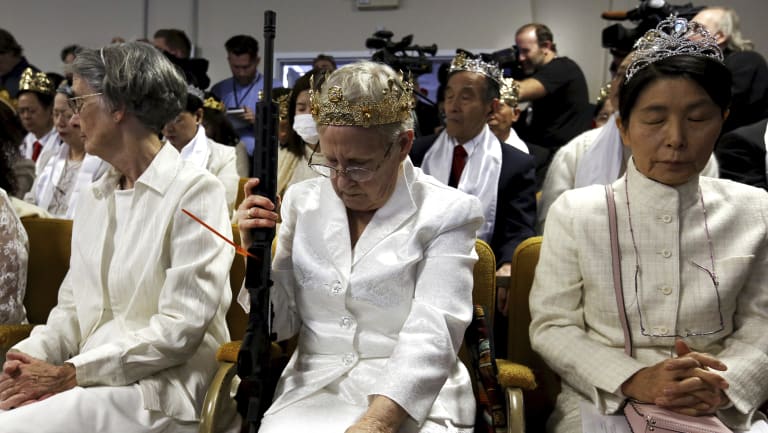 A woman wears a crown and holds an unloaded weapon as she bows her head during services at the World Peace and Unification Sanctuary, in Newfoundland, Pennsylvania.

That latest tragedy was freshly imprinted on millions of minds, among them Pastor Sean's. He eased into his hour-long Sunday morning sermon by reminding everyone of what President Donald Trump had pointed out after the Parkland shooting: "He said if the teachers were armed, they would have shot the hell out of that guy. This is the first time we've heard a president talk like that. This is God's grace, folks."

Virtually the entire congregation was coming back on Wednesday for the big blessing ceremony, so he reviewed some safety precautions, like securing rifle triggers with a zip tie: "Remember, folks, you can never take back a bullet." That was not to say worshippers couldn't pack heat. Anyone with a concealed-carry permit was welcome to bring their loaded pistol Wednesday (their "mini rod of iron") in addition to their AR-15. You never know, "there may be a wolf in sheep's clothing who tries to make trouble," said Pastor Sean.

After delivering a few social announcements (parents seeking marriage partners for their adult children were meeting at 3pm; tomorrow at 5pm there would be an AR-15 "breakdown" tutorial on how to properly disassemble the rifle), Pastor Sean delivered the meat of his sermon. He plowed familiar ground at first, citing Bible passages where the "rod of iron" was used to smite evildoers. Pacing the altar, he then segued into a freewheeling, gunfire-and-brimstone diatribe.

"You must shed the slave mentality and adopt the royal mentality. … The Democratic Party has become the Communist Party funded by Nazi collaborator George Soros. … The fake ministers and fake priests are pushing a dictator-Christ." 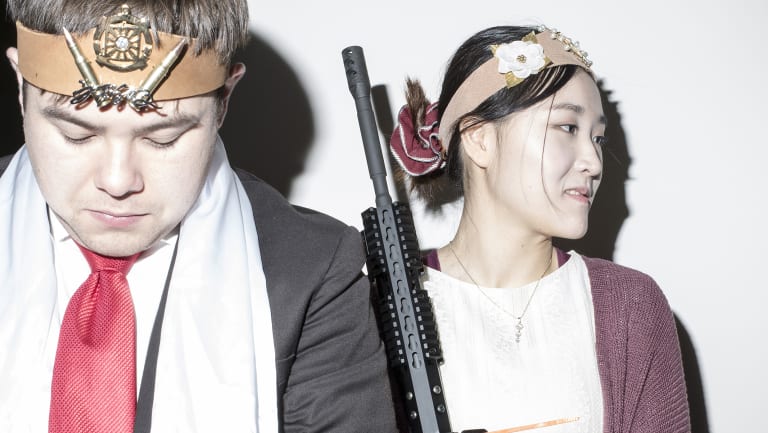 Church members during a blessing ceremony at the Sanctuary Church and the Rod of Iron Ministries. Bryan Anselm/Redux

He took potshots at some favourite targets: Hillary Clinton ("she was paying for the Russian dossier"), Pope Francis ("a socialist, communist devil") and government that gets too big for its britches. 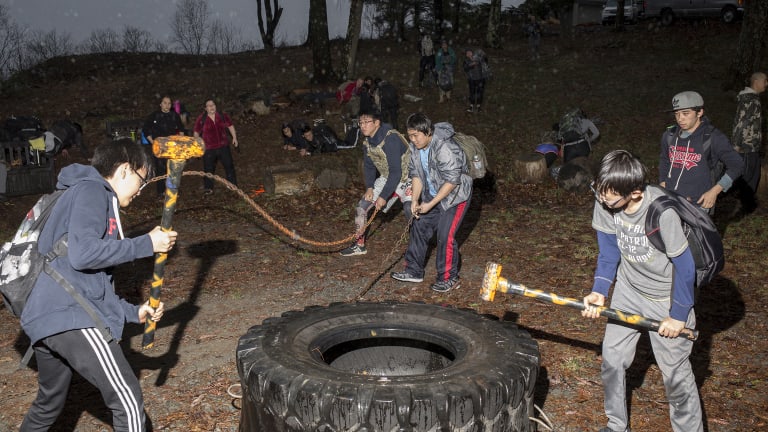 He showed a video clip of younger Church members undergoing quasi paramilitary training as Sanctuary's standby Peace Police/Peace Militia. They shoot rifles on the run in the woods. They wear camo for the Lord. They learn Filipino knife fighting.

"It's not about being a badass. It's about practising to be deadly because you love people," Pastor Sean told his flock. "The way of the rod of iron is the way of love."

In a few days, reporters, photographers and TV camera crews would swarm upon sleepy Newfoundland for the wedding-blessing ceremony – professional gawkers lured by the incongruous coupling of semi-automatic rifles and a house of worship. But the media circus also would quickly move on, without fully answering questions left dangling.

Who, exactly, are these Sanctuarians? And, with their injection of guns into the country's already divisive mix of politics and religion, what do they want? 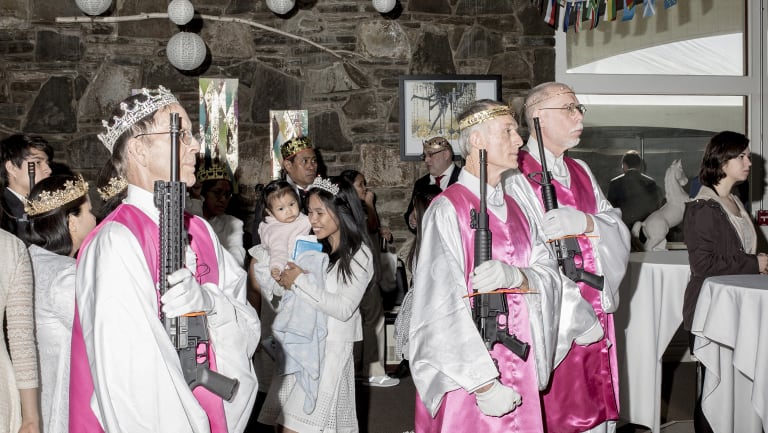 Church attendants hold their assault rifles during a sermon.

When the Reverend Sun Myung Moon died of complications from pneumonia in 2012 at age 92, it set off a power struggle within his family. Sean, with backing from older brother Kook Jin "Justin" Moon, contends he was selected from among his 10 adult siblings to inherit the Unification Church mantle and be crowned the next-generation "Second King" – not a full-fledged messiah like his father purported to be, but nonetheless responsible for finishing the work of building God's Kingdom. Meanwhile, their mother, Hak Ja Han, claims the Reverend Moon, her husband of 52 years, passed the baton to her.

The church they were fighting over has roots in both Korea and America. The Reverend Moon – born in 1920 in what is now North Korea but was then part of Japan – said Jesus appeared to him when he was 15 and asked him to take on the "special mission" of completing God's Kingdom on earth, Cheon Il Guk in his native Korean. First, however, he went off to study electrical engineering in Japan and got arrested (and tortured) twice for his activity in the Korean independence movement. He returned home, married and after World War II moved to Pyongyang, where the communist government threw him in a labour camp for preaching Christianity. When that camp was liberated near the end of the Korean War, Moon headed south. 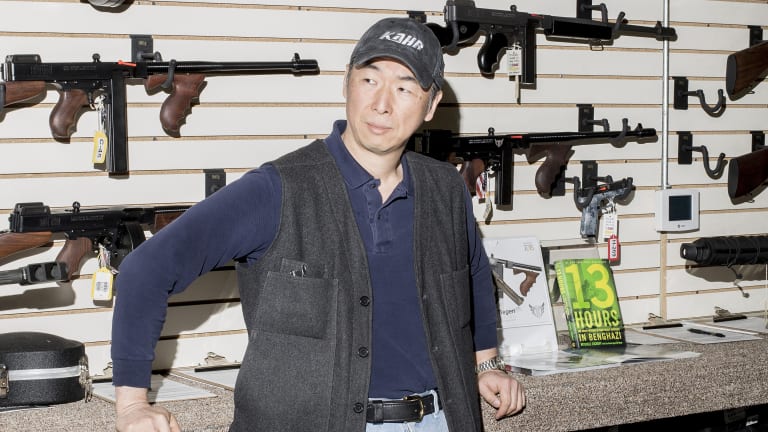 He established a church in Seoul in 1954, dubbing it the Holy Spirit Association for the Unification of World Christianity. He codified his beliefs in a text titled Divine Principle. One core construct says Satan seduced Eve in the Garden of Eden. This caused "the fall" of humankind by contaminating the bloodlines she and Adam transmitted through Cain and Abel. God sent Jesus to serve as a Second Adam to find sin-free love and salvage the family of man. But Jesus didn't live long enough to marry. It thus became Sun Myung Moon's destiny to step in as a Third Adam and redeem the world.

By 1957, he'd built a network of 30 churches and was wired into the South Korean business community and government. The only glitch was that his own marriage proved imperfect, ending in divorce. However, Hak Ja Han soon entered his life. They married in 1960, and followers hailed them as God's anointed "True Parents".

A decade later the reverend went to the United States, a necessary foothold for uniting the planet under his Unification banner. Moon spun a web of foundations and interlocking companies, reportedly becoming South Korea's first billionaire. His followers were untroubled by his wealth, but US Congress investigated his empire, and then the Internal Revenue Service came after him. In the mid-1980s Moon served 13 months in prison for failure to declare $US162,000 in taxable income. Ever the entrepreneur, he made arrangements in prison to start the conservative Washington Times, saying he did it "to fulfil God's desperate desire to save this world."

Unification Church membership figures have always been elastic, ranging from tens of thousands to several million. In 2009, the Washington Times cited 110,000 "adherents." Whatever the correct number, it had peaked by the late 1990s. Yet Moon pressed on. In 2003, a double-page ad in the Washington Times trumpeted this news: All 36 deceased American presidents acknowledged Sun Myung Moon's greatness. What's more, each one had written an endorsement letter from the Great Beyond. "People of America, rise again. Return to the nation's founding spirit," said Thomas Jefferson, once characterised as a "howling atheist" by political opponents. "Follow the teachings of Reverend Sun Myung Moon, the Messiah to all people."

Jefferson was, of course, one of the architects of America's system of government – which will become obsolete if Moon's vision of God's Kingdom on earth comes to pass. Pastor Sean is convinced that will happen, and in preparation, he has taken it upon himself to write a Constitution of the United States of Cheon Il Guk, grounded in principles articulated by his father.

If all proceeds according to divine plan, the country will be ruled by monarchs drawn from his branch of the Moon family. If the Kingdom comes in Sean's lifetime, he'll take the reins as king of the United States. Brother Justin – who serves as Sanctuary Church's de facto assistant pastor – is set to be inspector general, a super special prosecutor charged with rooting out government corruption. Don't worry. It's not a theocracy, Sean says: "We would refer to it as a libertarian Christian monarchy or maybe a libertarian republican democracy."