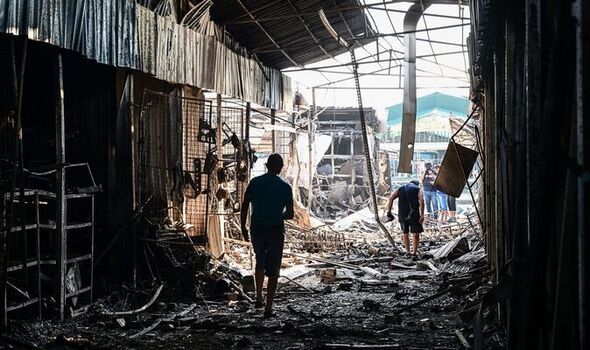 Rockets slammed into a central market in Slovyansk, in the east of the country. The firestorm that followed killed two people and injured seven.

Yesterday’s merciless shelling came a day after Vladimir Putin urged his commanders to push on, despite his troops securing the entire Luhansk region.

As civilians dashed for cover, Donetsk region governor, Pavlo Kyrylenko, tweeted: “I call on everyone: evacuate!”

Slovyansk’s mayor, Vadym Lyakh, later said the city was being pounded by Russian artillery from close range and urged people to remain in their shelters.

He said Moscow had “deployed significant forces” and was trying to send more troops across a river.

Mr Haidai said up to 15,000 civilians remained in Lysychansk and 8,000 in Severodonetsk, adding: “Today’s videos from Lysychansk are painful to watch.”

However, he said although the Russians were advancing, they were also “sustaining heavy losses” in fierce battles along the front.

Britain’s Ministry of Defence warned the battle for Slovyansk was now likely to become “the next key contest in the struggle for the Donbas”, with Putin’s troops within 10 miles of the city.

In stark reminders that nowhere in Ukraine is safe, a higher education centre in Kharkiv was destroyed by Russian fire. 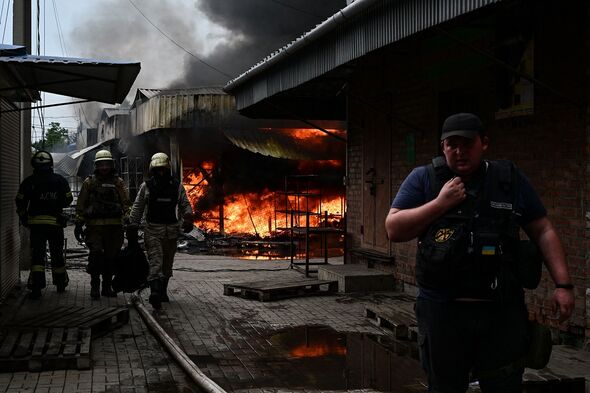 He said: “During the day, the occupiers shelled the Izium, Kharkiv, Chuhuiv, and Bohodukhiv districts throughout the region.

“Residential buildings, open areas and a wheat field were on fire. Three people were injured in the region, among them a child of one year and 11 months and a 64-year-old man.”

He added defiantly: “While the Russian ‘army’ is destroying educational institutions, residential buildings and fields with crops, our defenders are holding their ground. Offensive operations of the Russian Federation are unsuccessful.”

Meanwhile, the first rotation of Ukrainian soldiers has arrived in the UK for training by the 11 Security Force Assistance Brigade.

Defence secretary Ben Wallace told MPs the Government’s £2.3billion of military aid to Ukraine included “a commitment to spearhead an innovative programme which aims to train up to 10,000 new Ukrainian recruits in the UK”.

He added: “The first rotation of Ukrainian soldiers has recently arrived. Training will take place on military training areas across the North-east, South-west and Southeast regions.”