Class sizes in England’s secondary schools are rising, according to government figures.

New data indicates there is now the equivalent of one extra pupil in each class, compared to five years ago.

At the same time, the proportion of youngsters in larger classes has also increased, with around one in eight being in taught in classes of more than 30 pupils. 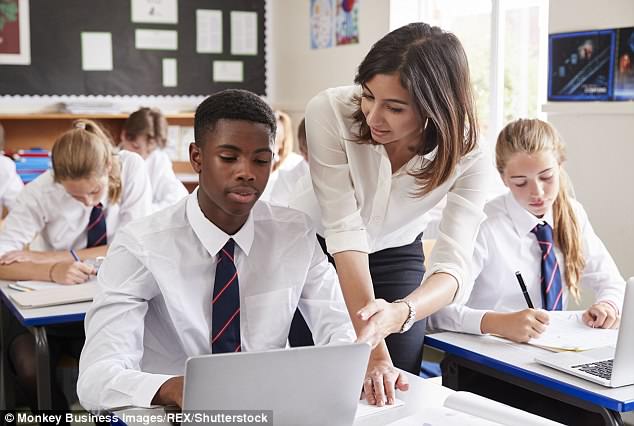 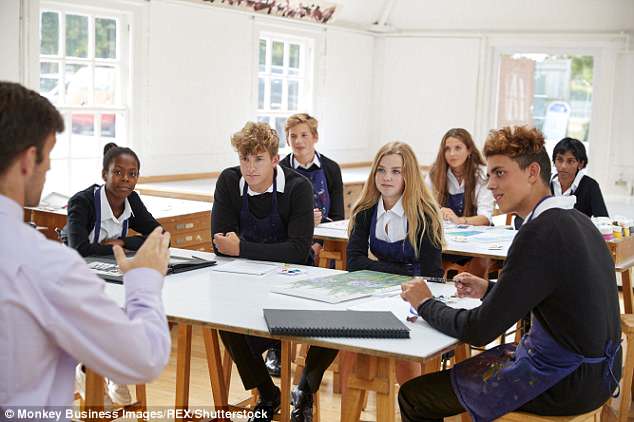 There are now 66,000 more children in school than there was at the same point last year

The latest Department for Education statistics, which look at the make-up of the school population across England, also reveals that one in three of the nation’s primary school children are from a minority ethnic background.

And more than one in five primary-age children do not speak English as their first language.

The statistics reveal that, as of January, the average class size in state secondary schools is 21.2 pupils, up from 20.8 last year.

In 2013, the average secondary class size was 20.3 pupils, suggesting there is now the equivalent of an extra pupil in every class.

While the vast majority of secondary school students are in classes of between one and 30 students, the data also reveals that 11.5 per cent were in classes of 31 to 35 students, and 0.6 per cent  were taught in lessons with 36 or more pupils.

These figures have increased compared to last year.

Overall, there are now 66,000 more children in the nation’s schools compared to the same point last year.

While some of this increase was in primaries, most was in secondaries, which have seen numbers rise by 35,400 in a year.

It is the fourth year in a row that there has been a rise in secondary school pupil numbers.

The hike comes amid a boom in pupil numbers caused in part by a rise in the birth rate in the early 2000s that is now making its way through to secondary schools.

The government figures also show that:

Geoff Barton, General Secretary of the Association of School and College Leaders, said: ‘We warned last year that class sizes were rising as a result of the funding crisis facing schools and the Government insisted that this was not the case.

‘However, the statistics speak for themselves. Average class sizes have risen for the third year in a row in secondary schools, and the percentage of classes with 31 or more students has also increased.

‘Schools have had to make huge budget cuts over the past three years because government funding hasn’t kept pace with rising costs. Many have had no choice other than to cut teaching posts which inevitably means larger classes.

‘No school wants to do this because it means teachers are less able to give individual support to pupils and larger classes drive up workload pressures. But the funding crisis has left them in an impossible position.’

A Local Government Association spokesman said: ‘As we have previously warned, demand is reducing in primary schools but increasing in secondary schools.

‘With nearly 70 per cent of secondary schools now academies or free schools, the lack of any council power or influence over the expansion and admissions policies of academies and free schools is a real concern.

‘Councils must be given powers to force schools to expand if local agreement cannot be reached voluntarily where this is in the best interests of new and existing pupils.

‘Most academies will be keen to work with their local authorities, but, in the minority of situations where this isn’t the case, appropriate powers are vital to ensure all children get a suitable place.

School standards minister Nick Gibb said: ‘Although we have more children in our education system than ever before, the average primary class size is still 27.1 and the average secondary class size shows little change at 21.2.

‘Alongside this we are spending £23 billion by 2021 to ensure every child regardless of their needs, background or circumstances has access to a good school place.’