Hundreds of people have been evacuated from hotels, campsites and homes across an Italian seaside resort as a wildfire spread through the area.

More than 400 people have been evacuated in Campomarino Lodi, a city in the Italian region of Molise.

Officials said firefighters and a helicopter had been deployed to battle the blaze, with photos showing smoke billowing high into the sky as helpless locals watched on.

Campomarino Lodi is far from alone in grappling with a wildfire – from Greece to California, the summer has seen such infernos rage in several places around the world, with lives lost and thousands evacuated.

In Europe, where some officials have blamed climate change for the large number of fires, blazes have burned in several countries, including other parts of Italy and Turkey.

Massive fires also have been burning across Siberia in northern Russia for a number of weeks. In all, wildfires have burned nearly 15 million acres this year in Russia. 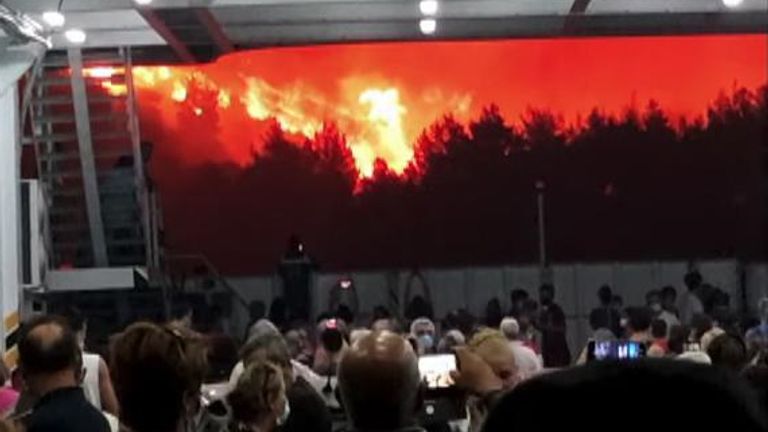 Thousands of people have fled wildfires burning out of control in Greece, including near the capital, Athens.

In dramatic scenes, residents and holidaymakers alike had to be ferried out of the island of Evia, the country’s second-largest, as all other escapes were blocked.

The fire on Evia started on 3 August and cut across the popular summer destination from coast to coast, burning out of control for five days.

Patrol boats, navy vessels, a ferry and fishing and private boats are on standby to carry out more potential evacuations from the seaside village of Pefki, on Evia.

The conditions on the island were particularly tough for the water-dropping planes and helicopters, with pilots facing “great danger” with limited visibility, air turbulence and wind currents from the fire, said Civil Protection chief NIkos Hardalias. 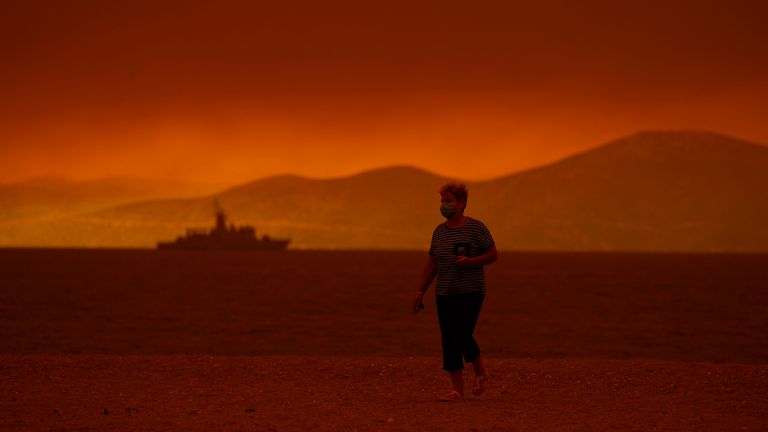 Elini Myrivili, chief heat officer in Athens, likened the fires raging in Greece to a “disaster movie”. She welcomed the “wonderful” international support, as a team of British firefighters today arrived to help.

British firefighters are expected to land in Greece later Sunday to help battle the fires.

Hundreds of firefighters have been battling the blazes, fuelled by bone-dry conditions after the country’s worst heatwave in decades, which sent temperatures soaring to 45C (113F).

At least 20 people have been treated in hospital for fire-related injuries, including two firefighters who were in intensive care.

Turkey’s worst fires in a decade 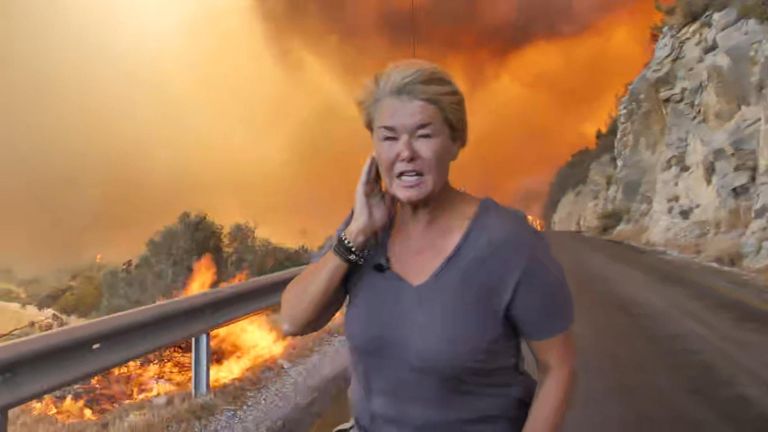 Fires in Turkey have killed at least eight people, including a volunteer who was carrying drinking water and other refreshments to firefighters in Marmaris.

The blazes have also killed countless animals, destroyed acres of forests near the country’s favourite tourist destinations, and forced thousands of evacuations.

They have been described as the worst in at least a decade.

The fires in the country’s southern and south-western coasts have been fuelled by a summer heatwave, low humidity and strong winds.

Two killed in Italy as Sicily declares state of emergency

In Italy, two people were killed in the southern Calabria region, a 53-year-old woman and her 34-year-old nephew. They were reportedly trying to save their olive trees.

Sicily has declared a state of emergency to last six months as fires burn through the island.

Temperatures are expected to soar in coming days, and could reach 45C (113F) in parts of Italy. Fuelled by strong winds and bone-dry vegetation, California’s Dixie Fire has grown to become the largest single wildfire in the state’s history.

The Gold Rush town of Greenville has been destroyed, with its estimated 800 residents told to evacuate before the blaze tore through the town. 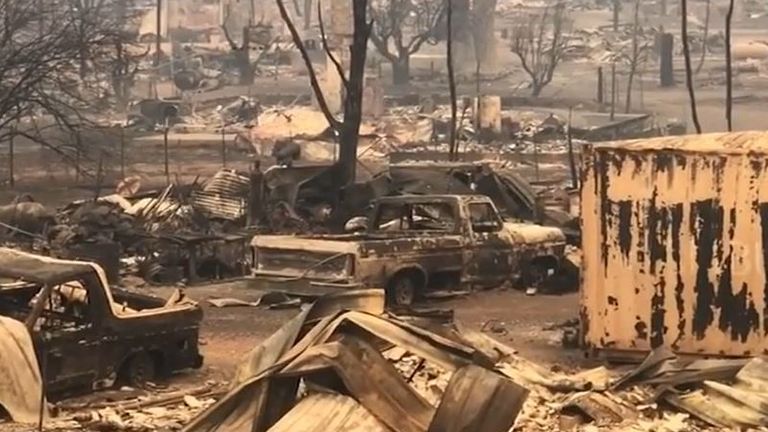 The Dixie Fire, named after the road where it started in Sacramento, covered an area of 700 square miles (1,813 square kilometres) on Saturday night, with just 21% of it contained contained, according to the California Department of Forestry and Fire Protection.

The fire has taken lives since it broke out on 13 July. More than 150 active forest fires in Siberia are threatening a dozen villages, and two had to be evacuated at the weekend in a vast region of Siberia.

In recent years, Russia has recorded high temperatures that many scientists regard as a result of climate change. The hot weather – coupled with the neglect of fire safety rules – has caused an increasing number of fires.