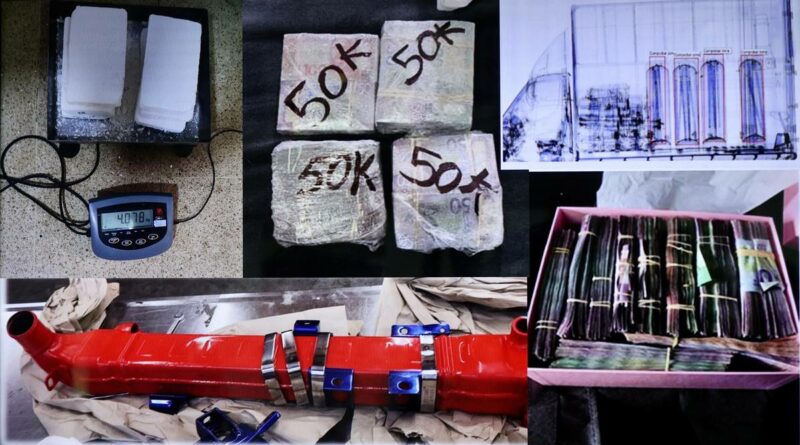 Alleged drug smugglers accused of bringing millions of dollars’ worth of cocaine from Colombia into New Zealand allegedly have direct links to the feared Medellin cartel, it’s understood.

Bundles of cash in $50,000 stacks, along with blocks of cocaine on scales, and items that the drugs were allegedly transported in were shown to the media on a large screen.

About 50kg of cocaine had been seized either in New Zealand or at overseas ports after a 10-month probe.

There had been six search warrants carried out in Canterbury, with six Colombian nationals and one Argentinian arrested.

One person had been arrested in Auckland.

Williams thanked the DEA for providing a lot of resources in the case – as well as the police in Colombia.

It was a massive blow to the organised crime group and the flow of cocaine in the country.

Consumption of the drug is relatively low compared to other countries.

This particular group was one of the significant suppliers of cocaine into New Zealand.

Networks from Colombia brought the drugs into New Zealand, with money going to the US.

Around $300,000 in cash has been seized, along with crypto wallets.

Williams said that they were a significant well-oiled group who tried to push the money out of the country as quick as they could.

New Zealand was being targeted by organised crime because Kiwis pay some of the highest prices for illicit drugs in the world.

Vast profits were available to the gangs, he said.

And now they are inserting their own people into New Zealand and getting supply lines with locals gangs and organised crime.

Twenty-three of such drug smuggling cells have been smashed around the world over the last few years.

The groups are intent on pumping “massive amounts” of cocaine, MDMA, and meth which is causing widespread social harm, Williams said.

But the gangs are not taking into account that New Zealand has good capability and legislation, with support from international partners, and knowledge of the networks and “who’s who in the zoo”

The message today for the cartels, Williams said, is: “Don’t bother coming.”

Operation Mist is another example of strong relationships between NZ agencies and international partners to disrupt organised crime, Williams said.

The problem is not going away and the lucrativeness of the market makes NZ an attractive target.

A common method of getting the drugs into New Zealand was hiding them inside other things and putting them on shipping containers.

A heat exchanger, for example, had around 1kg of cocaine hidden inside it and was discovered this month.

Large pieces of machinery, sweets or lollies, the gangs were try and concealing drugs in all sorts of things.

Williams was reluctant to go into details of the networks involved in Colombia.

But “key people in Colombia” have been identified, he said.

Although eight people have been arrested, and phones have been seized, the police are looking at who else is involved. More cocaine could still be en route, from this group, and will be seized by police, Williams added.

The Herald understands that police will allege links to the Medellin cartel, founded and led by Pablo Escobar.

“We are unable to provide further details currently for operational reasons but will proactively release an update this morning.”

It’s understood that police will speak at a press conference in Christchurch later today.

A 34-year-old man, who was granted interim name suppression, has been charged with conspiring “with persons unknown in Colombia” to import cocaine, seven charges of importing or attempting to import the drug, and four counts of money laundering, totalling more than $600,000.

He also faces charges of being a member of an organised criminal group involved with importing the class A drug.

Ruth Yanid Ramirez Alfonso, 38, from a rural address in Mid Canterbury, is alleged to have been involved in importing drugs going as far back as January 2018.

She has been charged with being in an organised criminal group involved in importing the class A drug methamphetamine, along with six charges of importing or attempting to import cocaine.

The man was remanded in custody without plea to December 1, while Alfonso was granted bail to the same date.

Six others allegedly involved in the drug-running operation have also been charged.

They are expected to appear at Christchurch District Court throughout today.

Christchurch bar owner Rene Bell faces an allegation that he jointly offended with two other men to launder $200,500 in cash.

The 44-year-old was granted bail on several conditions, including not to engage in any crypto currency transactions.

His lawyer Rupert Glover made no application for name suppression and he’ll be back in court on December 1.

A 29-year-old bar manager, who had been living in Christchurch, appeared from custody this morning on a money laundering charge, allegedly involving $10,000 between March 29 and September 2 this year.

He was released on bail to come back to court on December 1 by Judge John Brandts-Giesen who also granted interim name suppression so that family members could be told of his arrest.

A 30-year-old from rural Canterbury, facing charges of participating in an organised criminal group to import cocaine, and attempting to import cocaine into New Zealand between May 1 and August 31 this year.

She appeared in the dock from custody and was also granted interim name suppression and remanded on bail without plea to December 1. Bail conditions include surrendering her passport today and being told to stay away from alleged co-offenders.

Four foreign nationals involved in orchestrating the smuggling of $20 million worth of cocaine into Tauranga, the biggest cocaine haul destined for the New Zealand market, were jailed last year.

In May 2016, 35kg of cocaine arrived in New Zealand inside a diamante-encrusted horse head statue, which arrived by plane from Mexico via Hong Kong.

It was, at the time, New Zealand’s biggest ever cocaine bust.

The drugs had an estimated street value of up to $14m.