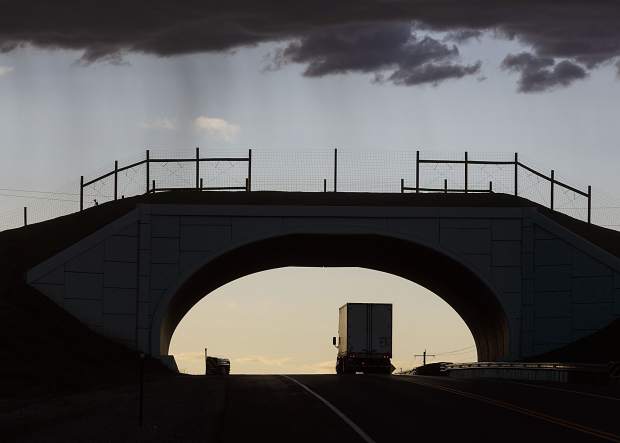 In the face of unrelenting development across Colorado, state officials on Wednesday rolled out a plan that aims to preserve as much land — and provide as many migration routes as possible — for the state’s declining big game populations.

The report, dubbed the Big Game Migration and Wildlife Connectivity Policy Report, lays out eight policy recommendations to better keep animal habitat intact and reduce the 3,300 vehicle-wildife collisions that occur on average every year, causing more than $66 million in property and personal damage. It also identifies potential funding sources at the federal and state level.

The ideas run the gamut from building animal underpasses and bridges to reduce collisions to making land use decisions that keep the needs of mule deer, elk and moose in mind to securing more commitments from oil and gas operators to have less impact on wildlife habitat.

The governor two years ago signed an executive order that supports protecting wildlife habitat and migratory routes, as well as public safety.

“Over the last 18 months, Coloradans have experienced the Great Outdoors in record numbers and we don’t see that trend changing any time soon,” Polis said, as traffic rolled behind him on U.S. 6, which was recently equipped with several wildlife underpasses that have dramatically reduced the number of vehicle-animal collisions on the busy stretch of highway.

Any improvements will be constrained by the need for funding and by Colorado’s continued population growth; 2020 Census figures show the state added 774,518 people over the last decade for a total of 5.8 million residents.

“While disease, competition, and predation contribute to these dwindling numbers, habitat loss and fragmentation stemming from residential, recreational, and industrial development — compounded by the long-term effects of climate change — present risk to these species,” the report states.

Local zoning and land use planning decisions are often “geared toward reducing barriers to private property development in rural areas,” the report says. “The resulting ‘parcelization’ can contribute to big game habitat fragmentation, particularly in low-lying winter range that is especially desirable for residential development.”

The report dedicates a section to infrastructure improvements that need to be made to reduce vehicle and animal collisions. CDOT, in its 10-year plan, has identified between $1.5 billion and $2.7 billion in capital projects to do just that.

One area that has shown promise is on State Highway 9 south of Kremmling, where an average of 56 wildlife collisions a year was reduced by 90% after five wildlife underpasses and two overpasses were built, connected by 10.5 miles of fencing.

Paul Jesaitis, CDOT’s Region 1 transportation director, said more is coming. He pointed to four underpasses being built on the 18-mile stretch of The Gap on Interstate 25 between Monument and Castle Rock and two planned large crossings on Interstate 70 west of Denver — one at Genesee and one at Empire.

“We’re trying to put the money where it will do the most good,” Jesaitis said.