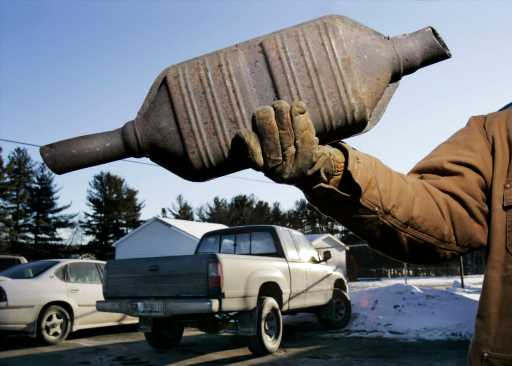 In recent months, mechanics at Steve’s Automotive have received numerous calls from people asking whether they work on catalytic converter car parts.

But because the calls have become so frequent, mechanics at the shop have learned what the callers are up to and now know exactly how to handle the inquiries.

“We say we don’t even touch catalytic converters,” said Charles Patterson, co-owner of the automotive business on Second Avenue in Longmont. “It’s crazy. Every month they (call and) try the same thing.”

Recently, a customer who owns a fleet of work vans told Patterson four converters were stolen from his vehicles, Patterson said.

“They park their vehicles here in order to not lose the rest of them,” he said.

In recent years, theft of car parts — specifically catalytic converters — has increased as people snatch them from underneath parked cars and sell them for hundreds of dollars.

So far this year, Longmont Public Safety Department has reported about 59 catalytic converters stolen from cars in the city. Last year, the department had 12 reports and three in 2019.

“It’s definitely something that has increased significantly over the past few years,” said Detective Cassidy Jones with Longmont Public Safety. “It’s easy money. It only takes a few minutes to do and has a pretty good payout and takes little equipment to do.”

Patterson said the removal of a catalytic converter can be done in a matter of minutes.

“They are just attached by a couple bolts,” he said. “It’s like a muffler. You just loosen those and pull.”

“Between the pandemic and a lot of people being out of jobs and looking for that fast money, it’s an easy way to get a buck pretty quickly,” she said.

A converter can sell anywhere from $50 to $800, Jones said. The costly side is replacing the car part if it’s stolen. It can cost anywhere from $1,000 or more.

Brian Rosipajla, deputy chief with the Lafayette Police Department, urges residents throughout Boulder County to be attentive. If they see anyone crawling under a vehicle and it seems suspicious — report it.

“One thing we are asking the public for is if you see something, say something,” he said. “We are closely monitoring the situation. A lot of our thefts are coming from all over the place even down to public areas such as the hospital.”

Rosipajla said what makes catalytic converters a hot commodity other than how easy they are to remove are the precious metals in them such as palladium and rhodium.

Some people have purchased aftermarket products such as cages to place around the converters, but people are also marking them or spray painting them to help them standout if stolen, Rosipajla said.

Sgt. Vinnie Montez with the Boulder County Sheriff’s Office said the county has seen an increase in car part thefts in the past year.

“Just from the information I got is people are selling these catalytic converters in the aftermarket or they are scrapping them,” he said. “I know we are responding to calls, and I have heard Lafayette going out on calls.”

Colorado State Patrol is currently working with AAA on an auto theft prevention program. As part of the program, mechanics are adding serial numbers to converters in an effort to make it easier to track the part in a database if it is stolen.

“There are repair shops that are able to put this etched number that goes onto the metal of the catalytic converter that allows us to track it and tie it back to the vehicle,” said Sgt. Blake White with the Colorado State Patrol. “(It’s) not only for recovery of those, it helps prevent the scrap yard from buying them because it shows it’s tied to a vehicle.”

White said CPS and AAA already are working with certain mechanics throughout the state but plan to expand the program.

“I was actually talking to my physical therapist who had hers cut off,” he said. “She was saying her insurance covered half of it, and she was on the hook for the rest. It’s just such a fast crime.”