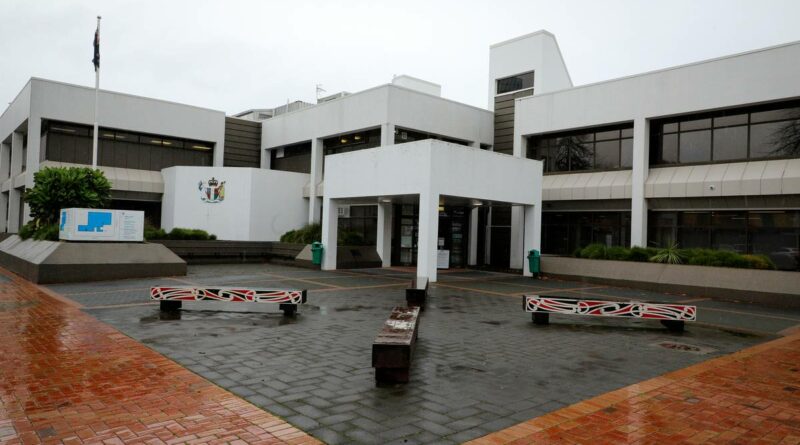 A knuckleduster, a bong, a can of Cody’s, knives, methamphetamine and cannabis aren’t on your standard checklist of items you need to take to court – but people in Rotorua tried.

Information released under the Official Information Act has revealed the disturbing items security officers have confiscated off visitors to the Rotorua Courthouse during the past year – despite Covid-19 restrictions seeing increased security measures.

While there is clearly a need to search members of the public, one Rotorua lawyer said it was “frustrating and degrading” for lawyers to have to go through the same process every day, something which the Ministry of Justice said they can’t avoid.

Despite the visible presence of security staff, a body scanner and a bag scanning machine, people are still pushing their luck when it comes to smuggling banned items into the court.

There were 41 times between November 2020 and November this year when security officers had to confiscate items in Rotorua.

Court security officers have powers to take items into temporary custody if they are deemed a potential weapon. They can be given back to the person when they leave the court.

If items are deemed illegal or a prohibited offensive weapon, the items can be seized and the person detained. The matter is then handed on to the police.

Rotorua defence lawyer Rob Vigor Brown said clearly screening was needed for the general public but lawyers were officers of the court and shouldn’t have to be screened each day.

“I can’t see the reason for it and quite frankly I find it frustrating and degrading. It hacks me off when you go down there and I have to be searched when I’m an officer of the court.”

He described the daily screening of lawyers when they were rushing to cases and back and forward to talk to clients in the cells as “beyond a joke”.

“We work there day in and day out and, admittedly now we get priority to enter the court and don’t have to stand in the queues to be screened, but it makes me want to give up law having to searched every day … We should be given unimpeded access to the court unless there is prior suspicion about our activities.”

Ministry of Justice health, safety and security, corporate and digital services general manager Maeve Neilson said the ministry had obligations under the Health and Safety at Work Act to keep everyone who entered the courts safe.

“Security screening is completed to mitigate the risks associated with onsite violence that can occur within our courts. It is important to note that screening doesn’t focus on the person, it focuses on items that may provide a risk.”

Defence lawyer Martin Hine, who works in both Rotorua and Tauranga courts, said it was “frankly astonishing” with the heightened scrutiny and security with the Covid-19 pandemic that people would persist in bringing illegal and inappropriate items to court.

“The drugs and paraphernalia are probably the same evidence of the entrenched nature of the issue that continues to blight our communities and impacts on the thought processes of those people caught up in its ravages. When you think of the high levels of violence that can be spawned by some of these drugs, it is not at all surprising that the thought processes around attending court are not clear.”

He said lawyers often had people attending court who were intoxicated either from alcohol, cannabis or methamphetamine and disarming them of these substances at the court doors helped minimise the risk to other court users.

As for the weapons seized in Rotorua this year, he said the list “beggars belief”.

“It really just highlights the fact that courts remain a potential tinderbox of conflict – if not in court because we at least have the capacity to disarm, but often around the court precincts where only the police have jurisdiction to intercede.”

He said court security did a great job and he was grateful for their efforts.

“Being a frontline worker in our current environment is courageous and a commitment to keeping our community safe.”

Rotorua police area commander Inspector Phil Taikato said police were aware items such as those confiscated were frequently carried in the community.

“Court is a public space where everyone deserves to be and feel safe – weapons, drugs and alcohol have no place there. Our justice sector colleagues do a fantastic job confiscating these items for the safety and security of everyone.”