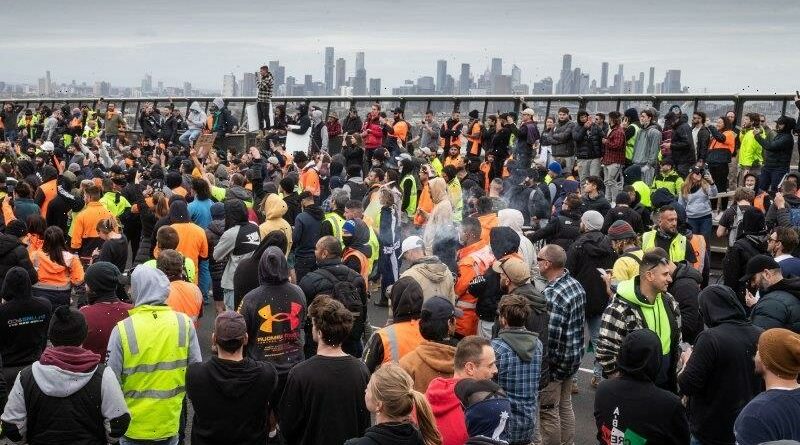 The government shutdown of Victoria’s construction industry has prompted one of the largest protests staged in Australia since the start of the pandemic, with frustrated labourers, libertarian activists and anti-vaxxers occupying Melbourne’s streets and clashing intermittently with riot police.

The meandering, day-long procession of up to 2000 people, mostly young men dressed in hoodies and high-viz jackets, provided an apt metaphor for being angry in lockdown – all steamed up and nowhere to go – as the mob marched through the city to the top of the West Gate Bridge and back again into a largely deserted CBD.

Organisers vowed to stage marches daily until construction workers are back on the job. Alongside calls to sack Victorian Premier Daniel Andrews, who on Monday ordered the entire industry down tools for at least two weeks, protesters chanted “everyday, everyday”.

The decision to lock up all building sites, a position strongly pushed by Chief Health Officer Brett Sutton, was taken after it became clear that the industry would not reach its government-imposed deadline of vaccinating 90 per cent of construction workers with at least one jab by Thursday.

The government’s no-jab, no-ticket ultimatum, which followed a week of negotiations between senior government ministers, union leaders and building companies, has exposed an emerging political and social fault line over mandatory vaccinations.

ACTU secretary Sally McManus, a vocal supporter of vaccination across all industries, questioned on Tuesday whether mandating the jab is the best way of reaching high vaccination rates.

On the streets of Melbourne, a protester wearing a Death Row Records sweatshirt put it another way: “We are not anti-vax, we are pro-choice.”

The public bust-up between the Andrews government and the construction industry – a sector that until now had maintained continuity on at least some sites throughout the pandemic – has now given an opportunity for others to vent their anger at Melbourne’s protracted lockdown.

Images of an angry mob laying violent siege to the CFMEU headquarters on Monday and thousands of people willing to march in defiance of COVID-19 restrictions the next day are symptoms of a city under increasing strain.

Exactly who these protesters are is a hot topic of debate. Bill Shorten, a one-time Labor leader who previously represented construction workers as national secretary of the AWU, described them on Today as “hard-right, man-baby Nazis”, while CFMEU Victorian secretary John Setka told 3AW that most didn’t work in construction or belong to a union. 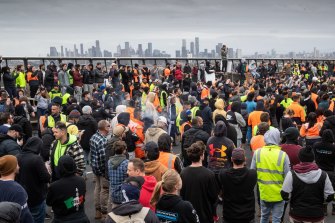 United Firefighters Union secretary Peter Marshall dismissed those taking to the streets as right-wing extremists. “Their callous disregard for the health and safety of their fellow Victorians shows they are not trade unionists,” he said.

Lisa Fitzpatrick, the Victorian boss of the Australian Nursing and Midwifery Federation, also made clear her contempt: “Nurses, midwives and carers are exhausted as they watch protesters fight for their right to overwhelm our health system.”

Despite the union movement’s determination to distance itself from the protesters, the majority marching on Tuesday appeared to be the people industrial unions used to represent; young, working-class men who, in at least some cases, have suddenly found themselves tossed out of work.

According to the Australian Bureau of Statistics, only one in 10 construction workers belongs to a trade union. The vast majority of the construction industry are either sole traders or small business owners unlikely to ever step foot on one of the CFMEU’s big building sites.

As the march made its way down the Bourke Street Mall, a father and son, both construction workers, told The Age that this was the first time in their lives they had been driven to protest. “It has come to this point,” the older man said. “I actually think it is necessary now because we aren’t going to recognise our society soon.”

His son, aged in his 20s, said it was legitimate to question the safety of COVID vaccines, but that wasn’t his only concern. “It’s been two years of this,” the son said. “Slowly but surely they’ve taken away our lives and our livelihoods and now they’re saying we need to be vaccinated to maintain our livelihoods.”

Other protesters were more ardent in their anti-vax views. A man in a red hoodie described the life-saving, TGA-approved inoculations as the “devil’s vaccine.” Another brandished a placard that read: “F— the Jab.”

The protest was promoted through social media channels by Melbourne Freedom Rally, a group that describes itself as a community of libertarian and populist activists.

The group promotes baseless conspiracy theories about doctors fraudulently claiming that people have died of COVID to exaggerate the scale of the pandemic and is campaigning for an immediate end to lockdown, a lifting of the state of emergency and a royal commission into the pandemic response.

Some protesters wore T-shirts with the logo of the Proud Boys, the neo-fascist group behind the storming of Capitol building in Washington at the end of the Trump presidency, and a few wore the colours of the Nomads, an outlaw motorcycle gang. Others wore CFMEU hoodies, AWU jackets and vests displaying the building companies they work for.

The protest was ugly at times and violent at others, but for the most part, the marchers were intent on avoiding open conflict with heavily armed riot police. It began outside the CFMEU headquarters, set off to Parliament House, then headed back through the city and along the West Gate freeway to the centre of the bridge.

In one of the most distasteful episodes of the day, a group of protesters manhandled and splashed urine on Paul Dowsley, a journalist with Channel 7. The same journalist was later hit in the head by an energy drink can during a live cross.

In other violent skirmishes, protesters hurled bottles and cans at heavily armed riot police who responded with rubber bullets and capsicum spray. About 4pm, a group of police vehicles were forced to speed away from an intersection near Carlton Gardens after they were swarmed by demonstrators.

Mr Patton said he was taken aback by the size and spontaneity of the protests.