And for my next trick! Glamorous contortionist, 26, does body-twisting bend through hole in giant throne in street… only to crack head in bloody grande finale

This is the TV blooper moment an Argentinian contortionist tries to show off her skills on a giant outdoors chair in Barcelona but smacks her face when standing up.

Argentinian Belen Pouchan couldn’t resist twisting herself into knots during a holiday tour of Europe.

But one of the huge chairs in the Catalan capital’s Placa Sant Jaume in front of its city hall proved her undoing in a drama captured on camera by her mother. 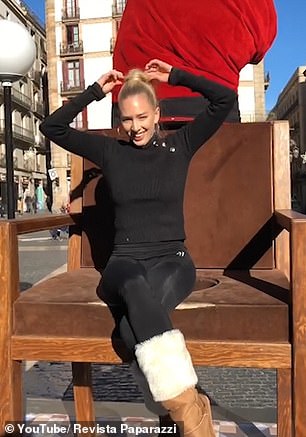 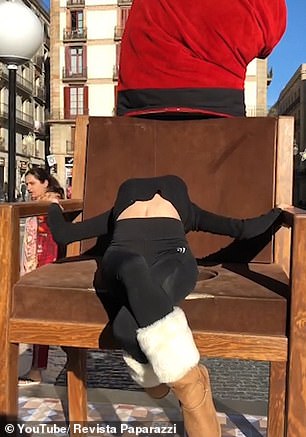 Argentinian Belen Pouchan, 26, sits on the large wooden chair in Barcelona, left, preparing to show off her skills before leaning back, right, through a hole in the middle

Footage shows Belen successfully negotiating the large hole in the middle of the chair – before whacking herself in the head with the bottom of the seat as she goes to get up from her acrobatic position.

The image went black after her mum realised her 26-year-old daughter was hurt and filmed blood on the floor as onlookers rushed over to offer her help.

The contortionist, a well-known TV celeb in her homeland, ended up going to hospital to have five stitches in her nose.

Belen showed off the damage she had done and told Argentinian media: ‘There were some giant chairs that had been put out for the arrival of the Three Wise Men and when I saw them I decided to record a video and asked my mum to film me.

‘I did it but as I was leaving I realised it hadn’t recorded properly and we went back to do it again. 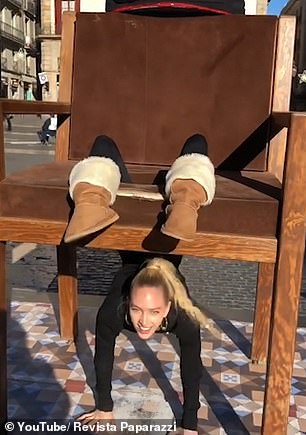 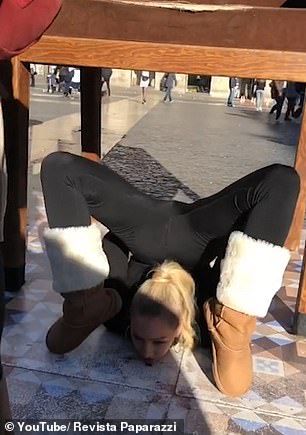 The contortionist is all smiles, left, as she makes it through the hole and brings her legs over her shoulders, right, before attempting to stand back up 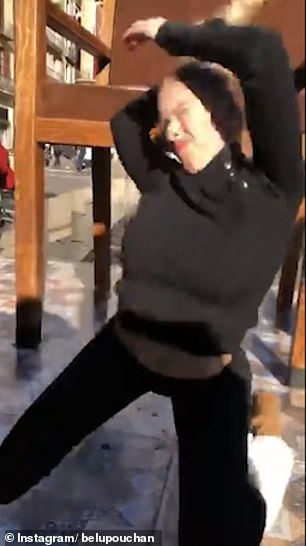 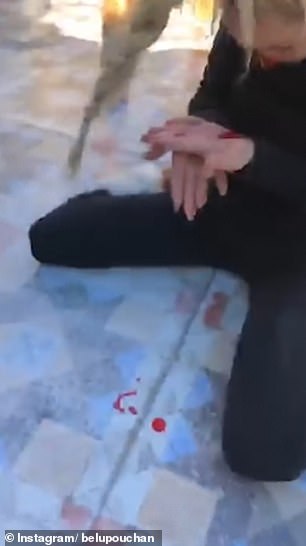 As Belen stands up she smacks her head on the bottom of the chair, left, and blood, right, drips from her face onto the pavement

‘The second time round I made a slight change and ended up smashing my face against the chair.

‘Everyone was horrified because they could see I was losing a lot of blood. I was conscious throughout but went into a little bit of shock because I suffered a bad blow to my face.

‘The ambulance took a while to reach me and then I was waiting in hospital for a long time, about six hours.

‘The accident happened about 2pm and I only left hospital around seven hours later. I was given five stitches but luckily I didn’t break my nose.’

Belen, who had previously showed off her acrobatic skills with pictures she loaded onto social media from Frankfurt and the Arc de Triomphe in Paris, added in an Instagram message to her fans alongside a cropped video of her accident without the blood: ‘It couldn’t go wrong could it? Yes it could!!!

‘Make sure you don’t do this at home. And this time I’m serious.’

One fan replied: ‘It hurt me. I hope you’re okay.’

Another added: ‘You’re beautiful all the same. Take care of yourself so we can carry on seeing you as pretty as you are now.’