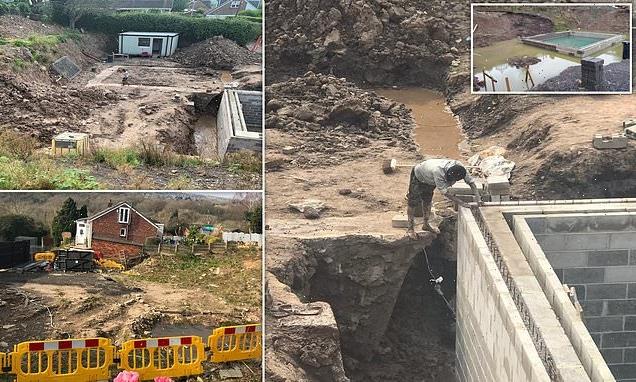 People living next to a construction site where a man trying to build his dream home while allowing workers to dig barefoot, have spoken of their ‘nightmare’.

Mustapha Matib, who is not a builder, took it upon himself to act as principal contractor for the project to build the new home, in Gibralter Lane, Denton, in Greater Manchester.

After being given planning permission to build on the land construction started, but neighbours were left furious with the ‘eyesore’ conditions and the potential harm workers were being placed in.

Shocking pictures showed workers with no shoes or socks toiling on the rubble-filled site, with one capturing a worker leaning over a huge hole thought to be around seven feet deep. 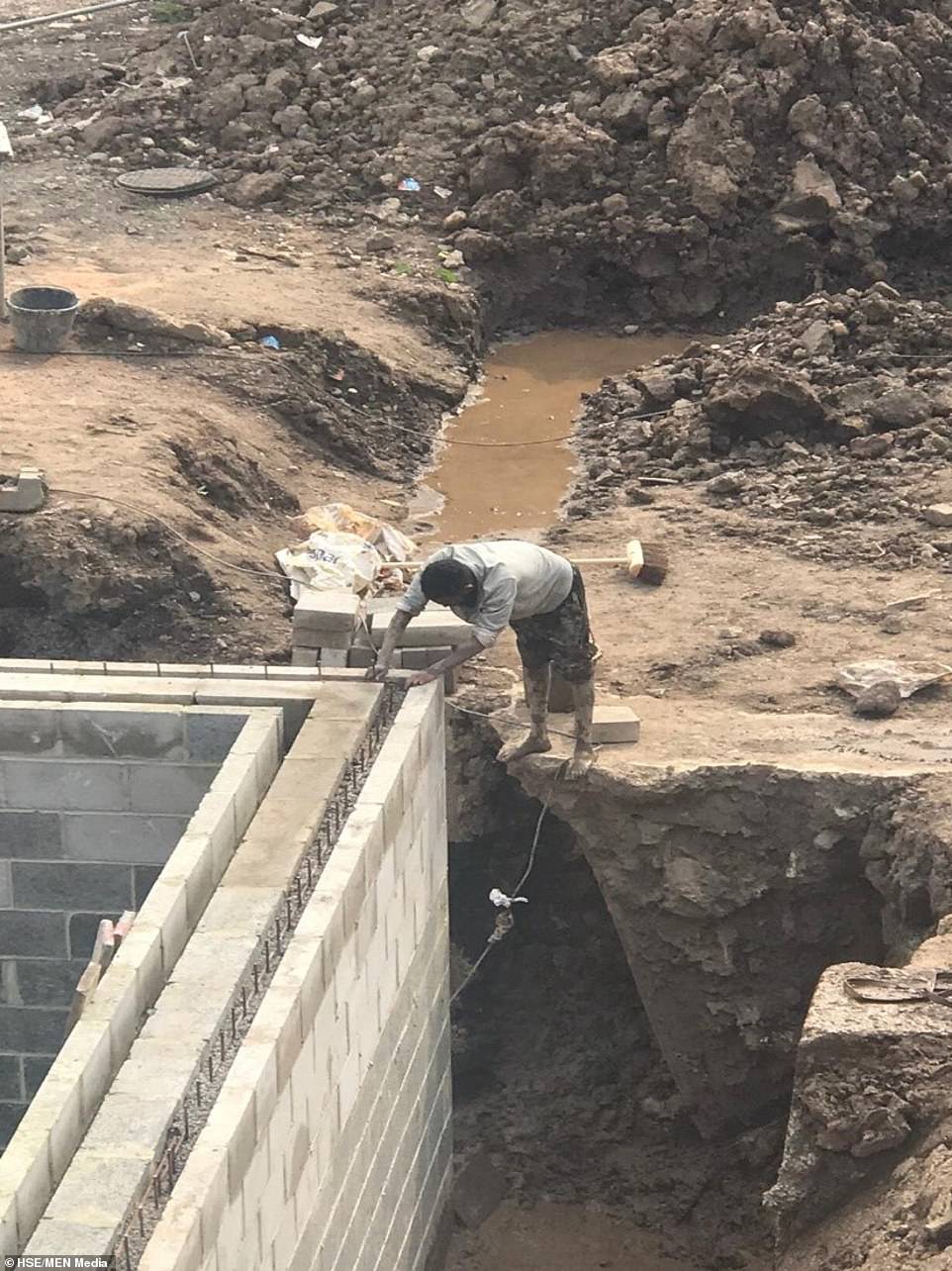 Residents in Denton, Greater Manchester, were shocked to see workers on the construction site walking around bare foot in the rubble-filled area 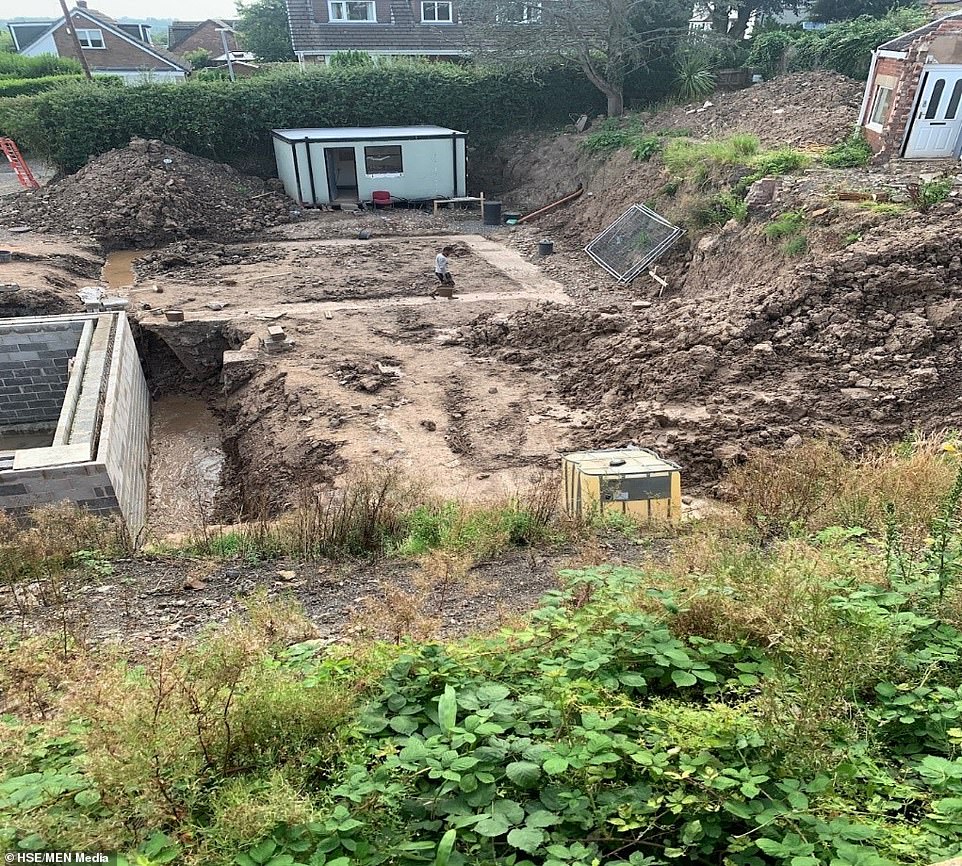 The work was being run by owner Mustapha Matib, who wanted to build his future home on the site along with what is believed to be a swimming pool

Locals said they understood the hole was to become a swimming pool as part of Mahib’s dream home, which was set to include four en-suite bedrooms, a kitchen, guest and family lounges, a double garage and a gym/pool.

The botched excavation work has left one property on the site close to the Haughton Dale Nature Reserve ‘unstable’, according to the Health and Safety Executive (HSE).

Matib was successfully prosecuted by the HSE and was handed a suspended prison term at Manchester Magistrates’ Court.

Those living nearby spoke of their anger and frustration at what had been happening at the site since planning permission was granted several years ago.

One man, Ernie Lamb, said it had been ‘a nightmare’.

Ernie, 77, said: ‘We’ve been here for two-and-a-half years and it’s been going on since before then.

‘It’s been going on for up to four to five years I believe. It’s just gone on and on and on, and it’s caused a lot upset round here. 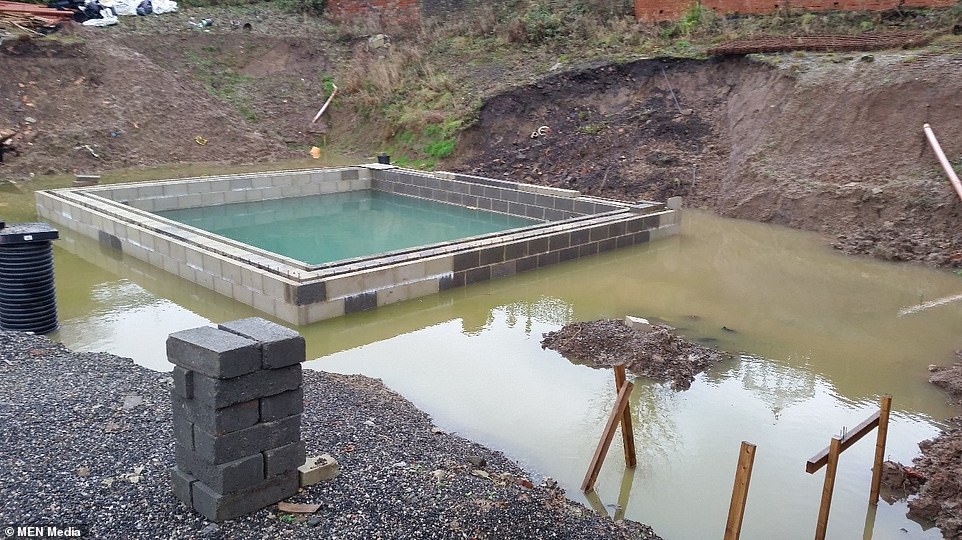 Residents say the building site and the large holes filled up with water after heavy rainfall, making it dangerous 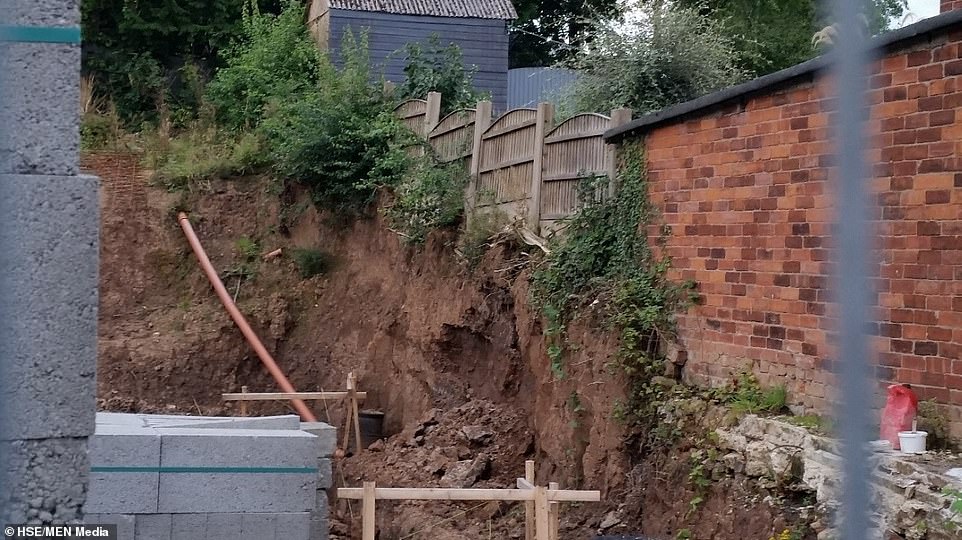 ‘I saw them working barefoot, everyone did. They were blaring loud music as well and we just couldn’t believe what we were seeing really.

‘We kept asking how are they getting around that ground, because, as you can see it’s rough down there.

‘The whole idea was that it had a swimming pool and they dug it out and breeze blocked it. But it rained pretty solidly and it just filled with water. It must have been six or seven-foot deep.

‘It also just had a really flimsy sort of wire mesh fence initially and this area is chocka with kids and people with dogs going down to the river in the valley and they were worried kids might get in and start playing in there. So I believe someone complained about that.

‘And the drivers were saying to us “I don’t think he has any idea what he’s doing, he’s just telling us ‘dig this, dig that'”.’

‘I don’t think a suspended sentence and a fine will mean much to him really.’

John Hulme, 59, agreed. He said the work had been ‘going on for years’.

John said: ‘It’s just been an eyesore and a consistent mess. They dug a massive hole which we think was meant to be the swimming pool and it just flooded.

‘The last time I saw people working on there was probably when they had a cabin put in last April.

One person said they saw workers on the site wearing ‘no shoes, no boots, no protective equipment’ and expressed concerns for their safety

‘When we did see people working on there they had no shoes, no boots, no protective equipment. It just saddened me really as they were just young lads and they weren’t being properly protected.

‘It was an accident waiting to happen really. And I just don’t understand it or see the point. I can’t imagine how much they have spent on it. So either build it, and do it properly, or sell it. That’s how we see it.

‘You do obviously worry when such sub-standard work is being done on your doorstep.

‘We weren’t too worried about our home but at other parts around it, fences have basically collapsed.

‘And if I was the person who lived next door I’d be very worried about my foundations.

‘It’s just been really frustrating for everyone. And who knows when it will get sorted as it’s still an eyesore.’

On the suspended sentence, John said: ‘I don’t like to see people going to prison.

‘The prisons are full as it is, and him going to jail wouldn’t solve anything so I think unpaid work probably is the most appropriate punishment.’ 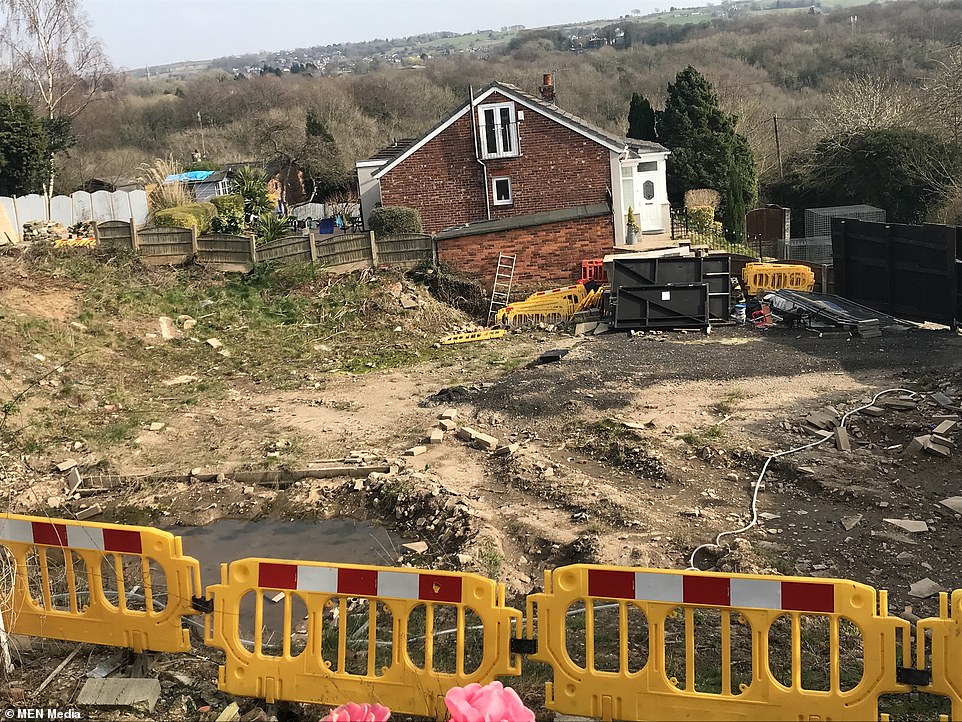 The HSE said Matib failed to prepare risk assessments and method statements detailing how the work would be safely carried out, failed to appoint a site manager with suitable skills, knowledge and experience and failed to ensure the health, safety and welfare of the workers

John’s wife Sue, also 59, added: ‘He’s a brick short of a load if he doesn’t know what people round there think of how he’s behaved over it. I don’t think the sentence is strong enough.’

Shirley Hoyland, 57, said: ‘We’ve not been as affected as others as we have only been here under two years and we don’t directly overlook it.

‘But you see lots of people coming and going, and they blatantly didn’t have the right gear or kit. It was shocking and pretty worrying, yeah.’

The HSE said it carried out an inspection in August 2020 after neighbours raised ‘significant concerns’ over the work.

A subsequent investigation found Matib had employed several groundworkers to excavate land ahead of the building of the new house.

However, he had failed to prepare risk assessments and method statements detailing how the work would be safely carried out, failed to appoint a site manager with suitable skills, knowledge and experience and failed to ensure the health, safety and welfare of the workers they said. 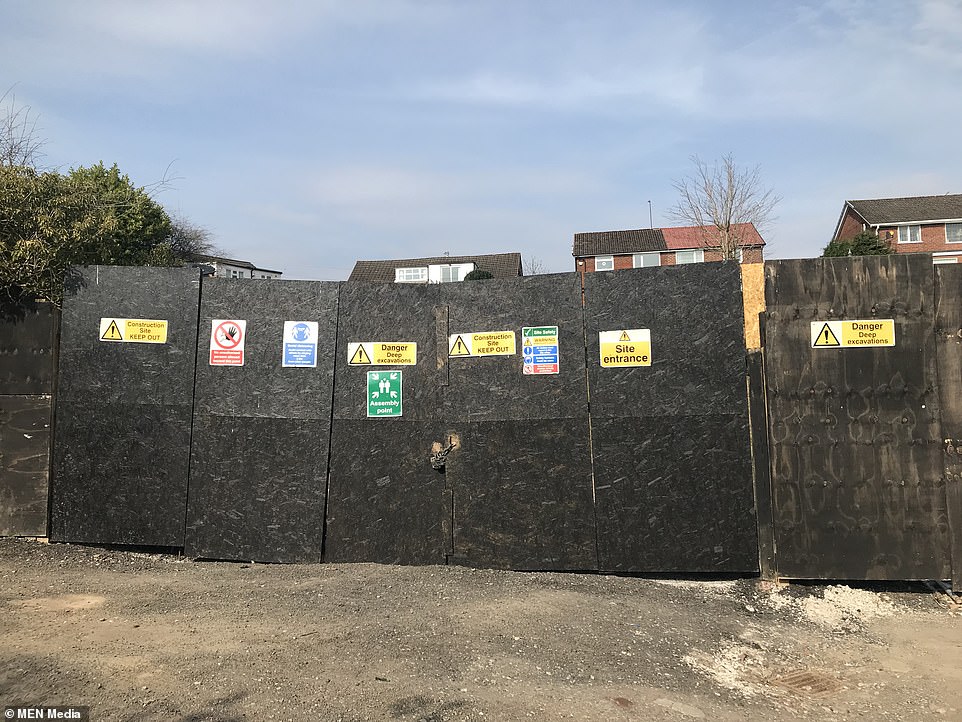 Matib pleaded guilty to two charges under the Health & Safety at Work Act and was sentneced to 16 weeks in prison, suspended for 12 months

A large, deep and unprotected excavation was found, meaning there was a ‘foreseeable fall risk.’

In addition, excavations were not shored or suitably battered back to prevent the risk of collapse they added.

Ultimately the work ‘put workers in danger and rendered the neighbouring property unstable’, the HSE said.

Speaking after the hearing, HSE inspector Phil Redman said: ‘Inspectors will not hesitate to take appropriate enforcement action against duty holders who fall below the required standards and put lives at risk.’