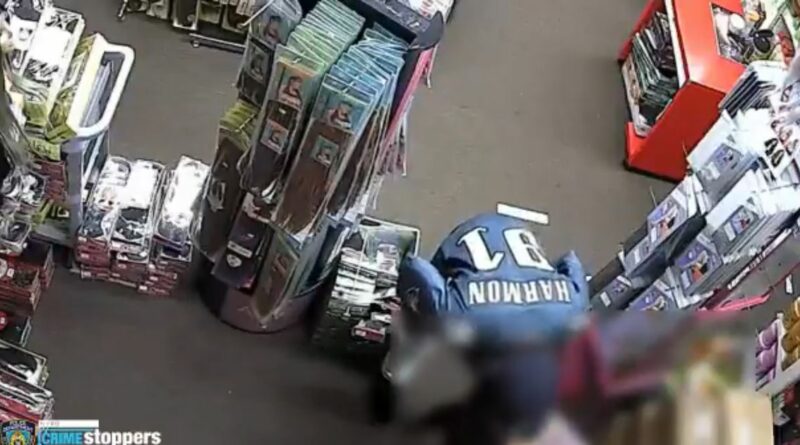 A pervert who licked an elderly woman's bum when she bent down in a US store is being hunted by detectives.

Police have released CCTV images of the bizarre incident in a bid to track the man before he strikes again.

The woman was not injured but police say she was left shaken by the brazen indecent assault.

She bent over to get something from the bottom shelf of a refrigerated cabinet.

The man waited a second or two, looked down at the bare flesh as her top rode up to reveal a tiny bit of bum cleavage.

It was then that he also bent over, and is accused of literally licking her bare bottom flash.

When the woman confronted the man, he said a few words to her, but then fled the scene.

The NYPD released the surveillance video of the strange encounter with the hope that the public could help identify the man.

Police described him as between 25 and 35 years old, standing around 5 feet, 8 inches tall and weighing about 160 pounds. He was last seen wearing a green football jersey, a dark blue baseball cap, and dark-coloured sneakers.

Officers in Brooklyn, New York, say they launched the investigation after the man sexually assaulted a woman in a Brooklyn beauty supply store.

The NYPD said she was in the Sutter Avenue store, in the Brownsville section, just before 2pm when the unidentified man approached her from behind.

We recently reported that police have dealt with a bizarre case of two perverts who duped 15,000 people into giving them socks to quench their foot fetish.

The Southport sock-men conned drinkers into parting ways with their socks in the name of charity.

Claiming to be collecting the socks for good causes the sockmen approached unsuspecting victims in the resort's bars and clubs and paid up to £5 for their footwear.

They made sure to take pictures of the victims with their socks and then meticulously tagged each pair with the donor's name before wrapping them in sandwich bags.

But when their homes in the resort were raided, police found an 18-inch deep "carpet" of socks.

They were hanging from lampshades and even covering the microwave.

Both men were jailed in 1998 for conspiring to commit acts of gross indecency.

They were found guilty of conspiring to commit acts of gross indecency, and at their trial on June 2, 1998, the extent of their fetish was revealed.

While in prison the pair served out their time working in the laundry room – even cleaning other prisoners' socks.

The court heard that when police raided one of the men's flats they found 4,000 pairs in binbags in a cupboard.

Officers described their astonishment when they found they had to wade through a "carpet" of smelly socks.