What was supposed to be a day at the Happiest Place on Earth turned into horror for families who saw a young man get tackled to the ground by police at Disneyland.

One woman named Claire witnessed and filmed the entire altercation, which she told DailyMail.com occurred near the ticket booth at the park’s entrance.

‘I heard a man screaming,’ she said. ‘When I looked over he was grabbing his head and throwing himself on the ground.’ 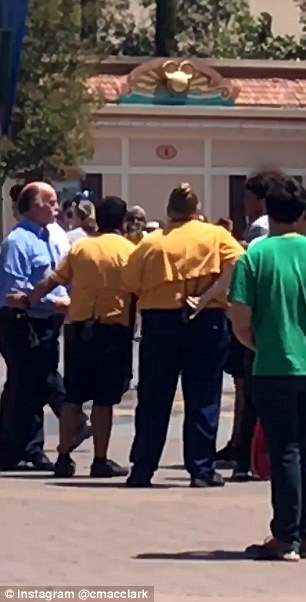 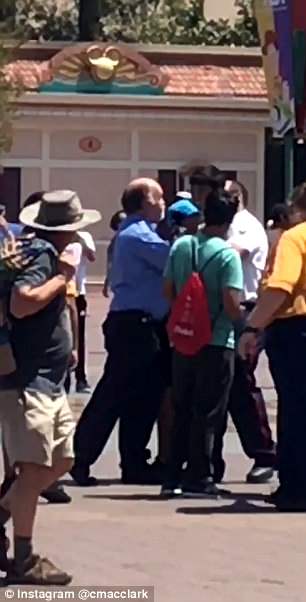 One woman, named Claire, filmed the moment a young man punched a security guard (pictured) and was then tackled to to the ground by police at Disneyland

‘Some employees came over and he went from screaming at them to hugging a woman.’

Claire’s footage shows the young man trying to hug one of the female Disneyland employees as she gently tries to push him off.

Three employees rush over to come to her rescue. They separate the man from their colleague and begin to talk to him and try to calm him down.

But then the young man suddenly punches an elderly security officer nearby, sending him sprawling to the ground. 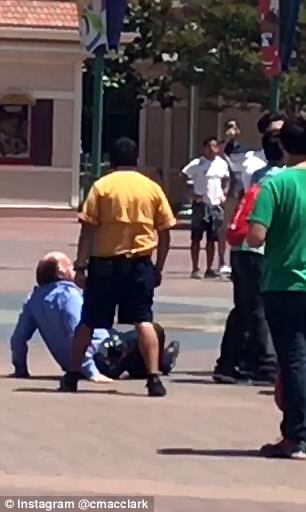 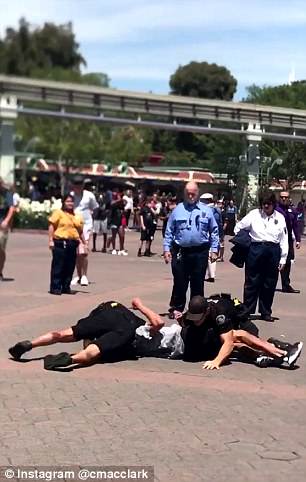 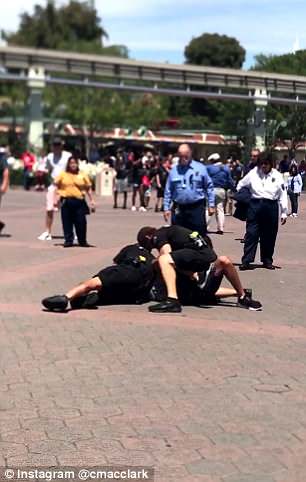 Then two cops appear and throw the young man onto the ground as others look on and some scream ‘Oh my god!’

One woman can be heard screaming ‘Oh my god, he hit the old man’ in the clip.

Chaos erupts as the young man begins yelling while the employees try to control him.

‘His friends looked panicked and told someone that he had taken something,’ Claire said.

‘The police came and tried to restrain him and he put up a fight for about 20 minutes.’

Claire’s video shows a man who appears to be a security guard wrapping his arms around the young man’s chest so that he cannot attack anyone again. 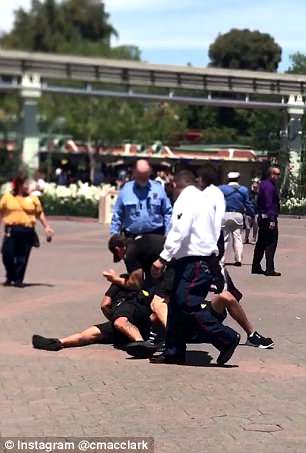 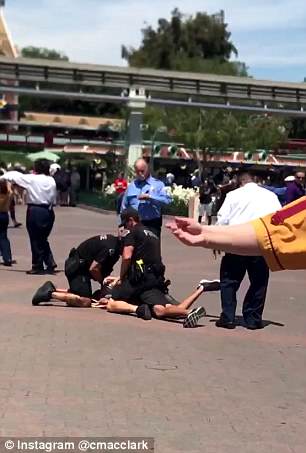 But then two cops appear and throw the young man onto the ground as others look on and some scream ‘Oh my god!’

One of the police officers then forcefully straddles the man as he tries to control him while the other cop appears to hold him down by the shoulders.

‘Go ahead, enjoy your day,’ one Disney employee can be heard telling Claire before the footage cuts out.

Claire, who lives in California, said ‘everyone seemed worried’ and ‘crowded around to watch’.

‘Disney employees repeatedly tried to prevent people from watching,’ she said. ‘And covered my phone asking me to go inside.’