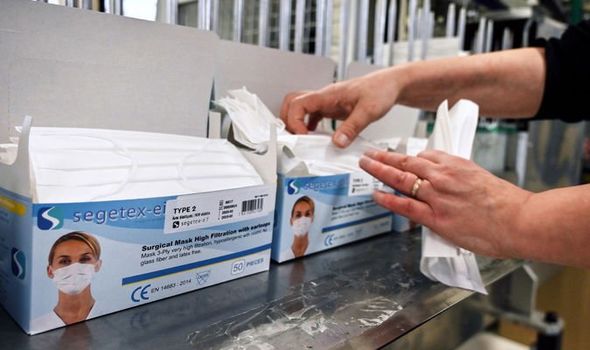 The number of confirmed cases of coronavirus in France more than doubled in 24 hours, French Health Minister Olivier Veran said on Thursday, jumping to 38 from 18 on Wednesday. This “sharp increase” was due to the identification of so-called “contact persons” linked to known cases, M Veran added, before insisting France was “ready” for an epidemic. Now, French MPs are demanding action from the government.

“We must draw up an emergency plan and prepare for the worst,” Eric Ciotti, of the opposition Les Républicains party, told parliament on Tuesday, before slamming the government’s “slow reaction time” to the crisis.

Out of the 38 cases in France, two people have died, 12 are cured and 24 having been hospitalised – two of those being in a “serious condition”.

Earlier on Thursday, President Emmanuel Macron said a coronavirus epidemic was inevitable, but stressed health authorities had bolstered measures to help curb the spread of the infection.

“We have a crisis before us. An epidemic is on its way,” M Macron said during a visit to a Paris hospital.

Prime Minister Edouard Philippe, for his part, said there was “no reason to be afraid, nor negligent”.

The deadly flu-like disease has infected more than 80,000 people and killed 2,800 in 34 countries, although the vast majority of cases remain in China, according to the World Health Organisation (WHO).

France has been on high alert since neighbouring Italy became Europe’s worst-hit country.

Italian officials said on Thursday that 17 people had died of the virus, adding that the number of confirmed cases had risen to over 650.

The French government has ordered anyone returning from China, Singapore, South Korea or the Italian regions of Lombardy and Veneto to take their temperature twice a day, wear a face mask and avoid all contact with weak or elderly people for 14 days.

Schoolchildren who have travelled to those zones have been instructed to stay at home for two weeks.

The WHO has urged countries to “prepare for a potential pandemic” – an epidemic that spreads throughout the world – even as new cases and deaths in China have continued to drop from previous numbers.

“We’re at a decisive point,” WHO chief Tedros Adhanom Ghebreyesus told a news conference in Geneva. “If you act aggressively now, you can contain the virus, you can prevent people getting sick, you can save lives.”

“We are actually in a very delicate situation in which an outbreak can go in any direction based on how we handle it,” he added.

The virus is believed to have emerged from a seafood market that also sold exotic wild animal products in Wuhan city in China’s Hubei province in late 2019, where it may have been transmitted to a human from an animal.