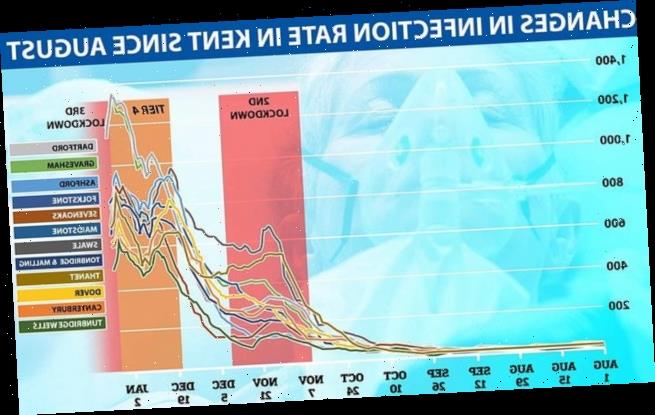 Did England pass its peak BEFORE lockdown? Covid outbreaks started to slow at start of 2021 in Kent and other Tier 4 areas – but cases are still spiralling in Liverpool (so use our tool to work out how bad the situation is in YOUR area)

England’s coronavirus outbreak could have started to slow down before the national lockdown started on January 4, data suggest as infection numbers appeared to peak in the worst-hit regions at the start of the year.

The tide appears to have turned in parts of the country experiencing the worst outbreaks – London, the South East and the East of England – in the first week of 2021, with cases coming down since then.

Millions of people living in those areas were forced into gruelling Tier 4 restrictions the weekend before Christmas, ordered to stay at home for two weeks to try and control the new variant before the national lockdown started.

Infection rates fell in most parts of the country at the start of January, suggesting local lockdown rules in place in December were having an effect but it wasn’t fast enough to satisfy ministers, who called a drastic national shutdown just days into the new year.

National figures paint a similar picture, with the 45,533 new positive tests announced today marking a 25 per cent fall on this time last week and representing the third day in a row that the country’s infection rate has come down.

It’s still too soon for the effects of national lockdown to show up reliably in data but cases starting to come down in some of the worst-affected places suggests that Tier 4 rules were working before they were abandoned.

Data from Kent, at the heart of the most recent outbreak, showed that cases were still fluctuating even in Tier 4,  coming down in all of the 13 local authorities put into Tier 4 before Christmas, then spiking again in January before declining again around the time when lockdown was announced.

In Liverpool, meanwhile, which was the only part of the country to be downgraded from Tier 3 to Tier 2 in December after officials claimed a mass-testing programme had got the city’s outbreak under control, cases skyrocketed at the end of the year and are still rising, although the increase has slowed in lockdown.

Experts say the beginnings of a decline in infection numbers are ‘looking good’ but that it’s too soon to ‘crack open the champagne’, with the coming days and weeks critical in judging whether Britain has got the new strain of coronavirus under control.

Lockdown rules are now not expected to lift until around 11.5million more of the country’s most vulnerable people have been vaccinated. 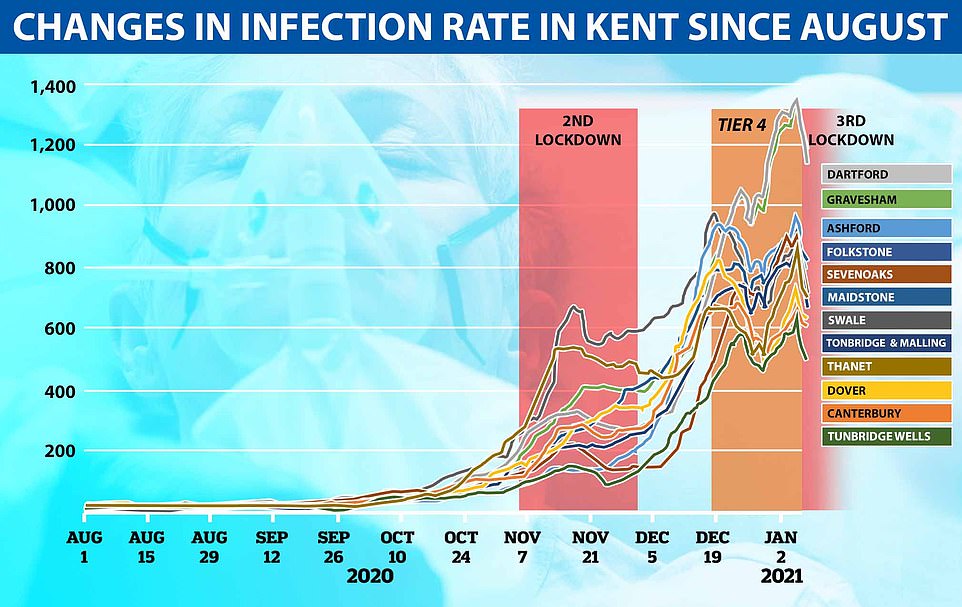 Cases in Kent appear to have come down as a result of Tier 4, at first over Christmas and then again in early January, but they spiked in the middle around new year, suggesting the restrictions weren’t working well enough to satisfy the Government 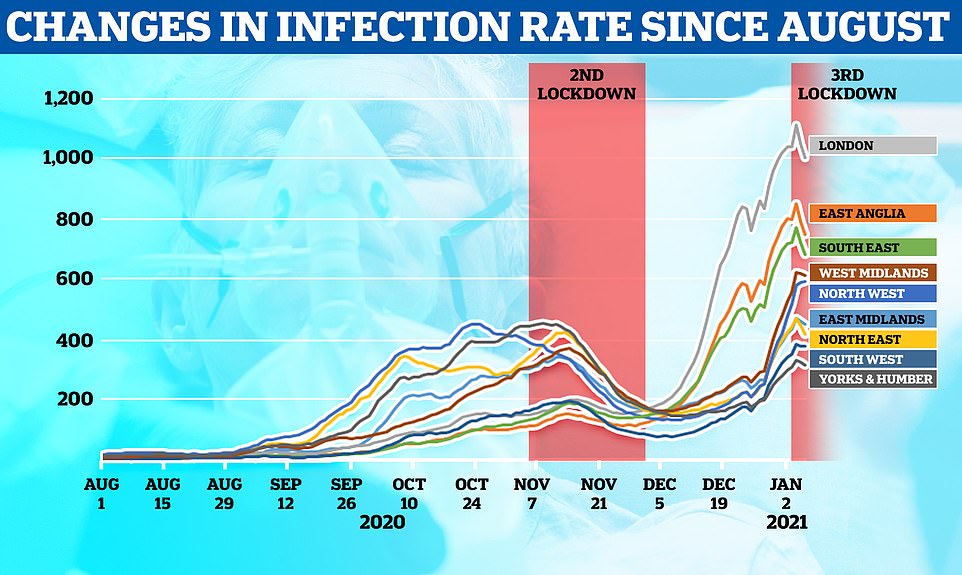 Infection rates in all regions started to fall at the start of January’s lockdown but it was too soon for the effects of the national rules to have taken effect, suggesting earlier restrictions were kicking in slowly 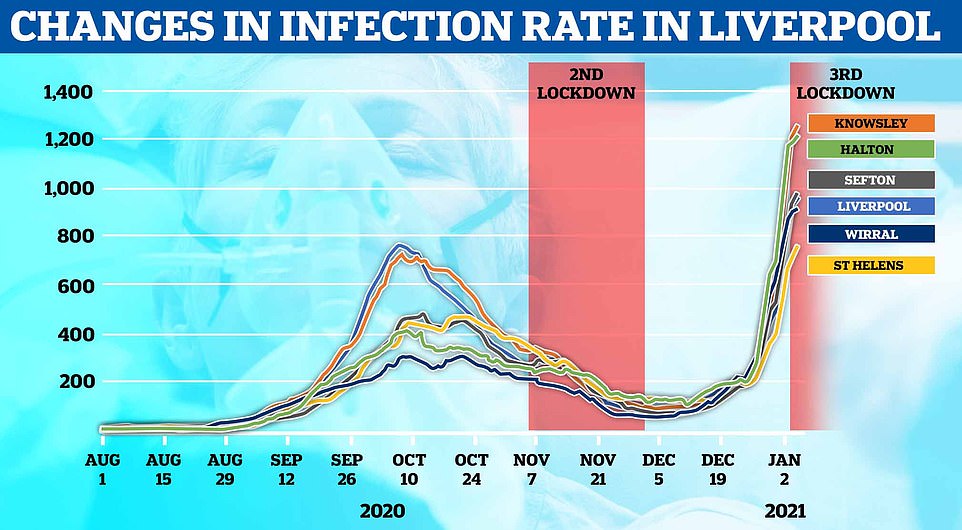 Rates of coronavirus have continued to surge in Liverpool, which was only in the unusually lenient Tier 2 before Christmas

Department of Health data show that cases in Kent hit a high watermark of 869 infections per 100,000 people – around 0.9 per cent of the population infected in a week – on January 4, the day before the lockdown came into force.

The fact that the regional infection rates peaked in Tier 4 areas at the very start of lockdown 3.0 suggests that the local restrictions they had been labouring under for the two weeks prior were starting to work.

It can take a week or two for case counts to start coming down after restrictions are brought in because it can take up to 10 days for someone to test positive for coronavirus after they catch it – this is why the self-isolation period is so long.

Any declines in cases seen at the start of the national lockdown, therefore, must have been the result of measures in place before it started. The effects of the England lockdown are only now filtering through in data as the Department of Health today announced 45,533 positive tests, which is the lowest figure since December 29.

The average infection rate in East of England dropped from a peak of 856 per 100,000 people on January 4 to 741 by January 7, the most recent data for the seven-day average.

In areas with the lightest rules, however, cases continued to surge late into the year and, despite almost the entire country getting tougher rules on boxing day, continued to rise into the start of lockdown, with some still going up.

Professor Paul Hunter, a medicine lecturer at the University of East Anglia, said the dropping rates were ‘promising’ but that he ‘wouldn’t crack open the champagne just yet’.

He told MailOnline: ‘Unless there is a glitch in the figures to get us all excited just to dash our hopes in three days time, this is looking very good.’

He warned the falling infection rate after January 4 may be because the national shutdown discouraged Britons suffering symptoms of the virus from getting tested, artificially driving down the number of cases early.

Data doesn’t support this, however, with more than half a million tests per day being carried out on all but one of the days since England went into lockdown and the average still rising.

How could Boris Johnson tighten the lockdown rules in England?

Boris Johnson is said to be considering tightening the coronavirus lockdown rules in England amid a surge in cases.

Here are some of the options Mr Johnson could consider:

Restaurants are not allowed to physically open during lockdown but they are allowed to offer takeaway food. However, there are rising worries that picking up takeaway food is also leading to too many households mixing while they wait for food to be prepared. Rules could therefore be tightened to stop people waiting inside restaurants. Ms Sturgeon also said this is under consideration in Scotland.

All workers who can work from home have already been instructed to do so. But rising case rates could prompt ministers to close workplaces which cannot shift to home working. It is thought estate agents and construction sites could be targeted with orders to shut down in a move which could have devastating consequences for jobs and the economy.

The Government is stepping up its efforts to enforce the current rules, with the police now more likely than ever before to hand out fines to rule breakers. The value of the fine could be increased to act as a bigger deterrent.

But Professor Hunter pointed to England’s Covid-19 hospitalisations data, with the daily number of admissions appearing to plateau by January 7 at almost 4,000 a day, suggesting infections may have peaked before lockdown.

This is because it takes roughly two weeks for someone who is infected with the virus to develop symptoms severe enough to be hospitalised, meaning infections may have initially begun to plateau after Christmas.

He said: ‘In the last seven days we had 2,000 fewer cases reported than in the previous seven days.

‘It’s a possible hint that things might be already on the decline… I wouldn’t quite crack open the champagne just yet and there’s nothing stopping that going the other way.

‘Unless this is something by some evil genius with a warped sense of humour who wanted to get us all excited just to dash us against the rocks in three days’ time, it is looking very good.’

Breaking Kent down into its 13 boroughs reveals 12 saw their Covid-19 infection rates peak on January 4 and then come down afterwards.

The county was plunged into Tier 4 only three weeks before most boroughs peaked – with gyms and so-called non-essential shops forced to close – which is around the time span that experts say is needed to show whether the measures are working.

There were mounting concerns that the highest tier, which had left schools open, was failing to control the more infectious coronavirus variant from Kent. Although the latest figures suggest the fear may be unfounded.

They paint a stark contrast to the situation in Liverpool, which was left in Tier 2 measures and only pushed into Tier 3 on December 30 after the Government held it up as an example of how to handle an outbreak.

Number 10 now faces the prospect of having to tighten the screw even further on England’s lockdown, in a last-ditch attempt to try to thwart the spread of the super-infectious new variant.

The Prime Minister today held a virtual meeting with his senior team as they considered their next move, with takeaways, click-and-collect services and the allowance for meeting up one-on-one to exercise thought to be next in the firing line.

No10 said Mr Johnson ‘re-iterated the need to bring the transmission rate of the virus down given the pressure that the NHS now faces’.

Sources told MailOnline the PM hopes to avoid going further this week, with the effects of England’s third national lockdown only just starting to feed into the daily infection figures.

But ministers have made clear they are ready to get even tougher, with leading figures on SAGE pushing for a three metre social rule distancing rule, and threats to axe the loophole allowing people to exercise with a friend from another household.

Nicola Sturgeon said today that she was mulling harsher limits on click and collect shopping in Scotland, as well as tightening the rules on takeaways. She is expected to announce any changes tomorrow.

The Government has been desperately pleading for people to limit their contacts and stay at home as the health service struggles to cope with the volume of Covid patients and police ramp up enforcement of the brutal restrictions.

Ms Patel used this evening’s TV conference, during which she was flanked by the chair of the National Police Chiefs’ Council, Martin Hewitt, and NHS London’s medical director, Dr Vin Diwakar, to plead with people to follow the rules.

She and Mr Hewitt said most people had been abiding by lockdown rules but they were still facing ‘egregious’ violations by some, and that police patrols would be stepped up and officers would become stricter about fines as they try to keep order on Britain’s streets.

Mr Hewitt also said that people refusing to wear masks on public transport should ‘expect a fine’, as he warned officers would no longer ‘waste time’ trying to reason with people. He revealed that forces across the UK have so far issued almost 45,000 fixed penalty notices to people breaking lockdown rules.