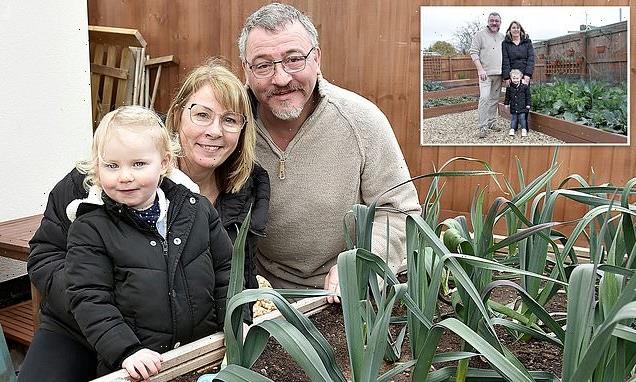 A green-fingered couple have accused council bosses of losing the plot after being slapped with a bill of nearly £500 for growing vegetables in their own garden.

Amateur growers Lee and Kirstie Lawes decided to transform part of their lawn into a vegetable patch as a lockdown hobby – one they could enjoy with their two-year-old granddaughter Ella.

The pair, from Deeping St James, Lincs, were so successful with their growing that they even started handed out their produce among neighbours.

But their well-meaning pandemic project may now have to be uprooted after council chiefs said their vegetable patch had constituted a ‘change of use’ to the land. 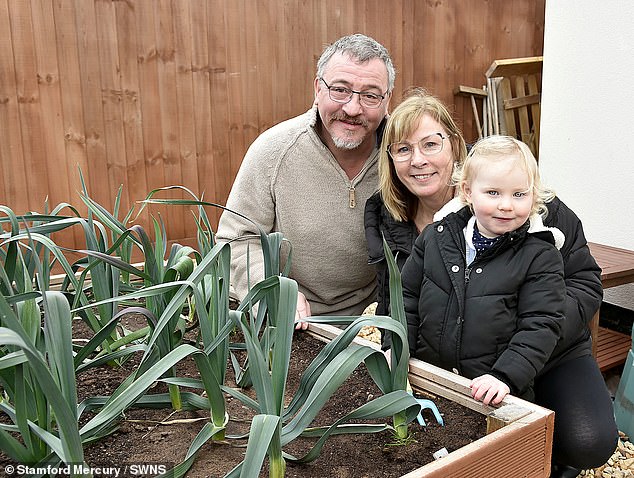 Lee says he consulted Land Registry records, which show the land has been part of the property they purchased since 1969.

But according to the council, part of the garden is classed an open space and by turning it into a place where vegetables are grown they have officially changed its use.

Lee said: ‘We moved into the house in December 2020, and on Christmas Day found a car parked on our garden.

‘This happened a couple of times, and I also became fed up with having to pick up dog poo from the grass before I mowed it.

‘So, in January last year we decided to put in a new fence and use that part of the garden for raised vegetable beds.

‘It was great – we ended up with so much produce we were able to give some to neighbours and left some out so that people could help themselves.

‘But a year on, we had a letter from the council saying we needed to pay £469 for a ‘change of use’ of the land.

‘I accept they are following procedure but it’s the hypocrisy of it that I find frustrating.

‘The government is telling us to be more sustainable but when someone starts to ‘grow their own’, the council tells you to pay £469 for the privilege.

‘It would have been easier to extend our house onto the land.’

A spokesman for South Kesteven District Council said the issue was due to the land being classed as ‘informal open space.

The spokesman said: ‘The land at the rear of these properties is classed as informal open space and the owner has not applied for planning permission to change that.

‘We have been advising them throughout on the lawful use of this land and continue to offer informal help while encouraging them to apply for planning permission, without which they might struggle to re-mortgage or sell the property.’ 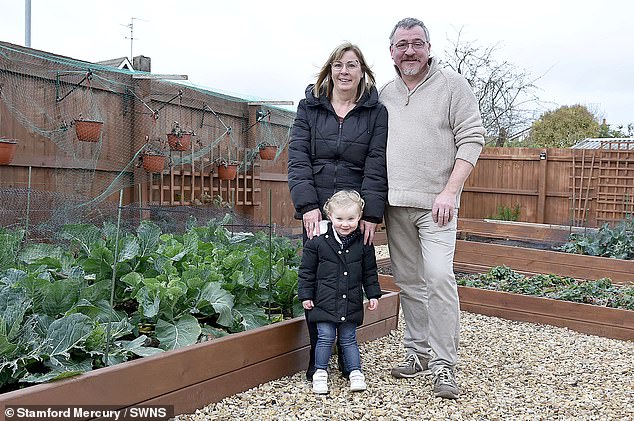 Its not the first time a council has gone after green-fingered gardeners growing vegetables in their back gardens.

In 2014 a couple in Bradford who lived off food grown in their back garden became embroiled in a legal battle – because their allotment ‘violated planning laws’.

Amanda Wadiun, 26, and her partner Paul Garnett, 29, bought the disused plot of land behind their home from Bradford council in 2010.

However, they were threatened with ‘enforcement action’ and a warning to demolish the wooden chicken run, shed and vegetable patch because they were not allowed to use the land as a ‘garden’ – despite selling the plot as ‘a private garden’.

The council the family could apply for retrospective planning permission but that the authority would recommend refusal.

However the authority later backed down saying there were ‘special circumstances which justified granting permission for the owners to erect a greenhouse and use it as a garden, especially since it had been used as such for many years’.

Lee and Kirstie are among the millions who turned to gardening to help them cope with Covid lockdowns.

According to figures released by the Office for National Statistics (ONS) last year, as many as 42 per cent of Britons said gardening helped keep them occupied while being unable to socialise with friends.

The rise in back garden growing even sparked praise from Prince Charles, who likened it to the famous Second World War ‘Dig for Victory’ slogan, which encouraged more people to grow vegetables in their back garden in a time of harsh wartime good rationing.

Speaking on Farming Today back in June 2020, the Prince said: ‘It appears that most of us have given much more thought than perhaps has usually been the case to the story behind our food during Covid-19.

‘Food availability was clearly an early issue; perhaps food shortages prompted many people to think for the very first time about whether they could depend on secure and reliable supplies of food in the post-Covid world?

‘I was fascinated to hear that sales of vegetable seeds reached an all-time high as a “dig for victory spirit” swept through the land and urban and country dwellers alike decided to requisition their gardens, allotments and window boxes to grow food in a way perhaps not seen since the Second World War.’