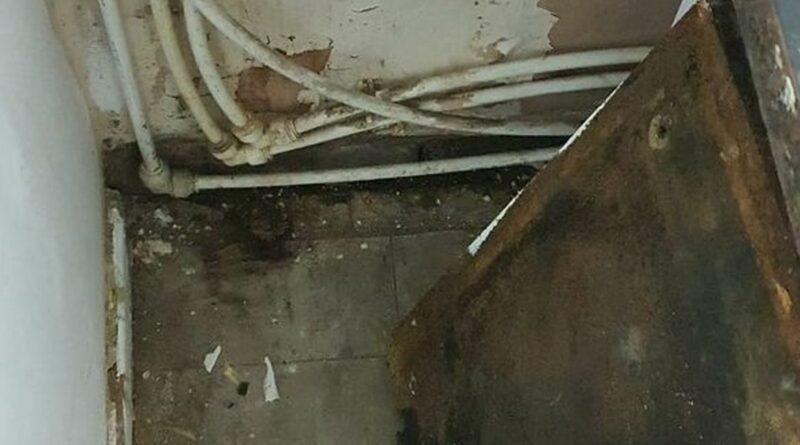 A family was forced to move out of their home on a notorious estate following an environmental report that dubbed the property "uninhabitable".

Edith Jones and her family moved into a house in Princes Crescent on the infamous Royal Estate in Edlington, South Yorkshire, in April last year and immediately saw cause for concern.

Not only was the home riddled with structural issues but it had several health hazards including a video of sink water rising from the bath, Yorkshire Live reports.

Despite the family only staying for six months in the horror property before moving out, it was certainly an eventful half a year as the house was afflicted by the likes of mould, faulty wiring and rust.

Photos of the home showed the wallpaper coming off the wall, electrical wiring and pipes exposed and doors with broken hinges.

The shocking state of the house didn't stop there as further images illustrated electrical wiring running close to water pipes and radiators covered in rust.

Due to Princes Crescent being part of several troubled roads that have been disrupted by violence, drugs and consistent crime, Edith found issues even just entering her home because her street was often cordoned off by police. "I lost count of the amount of times I couldn't get into my home after I finished work as the street was cordoned off," she said.

After an inspection of Edith's house was carried out by Doncaster Council recommended enforcement action and they found a number of category two hazards.

According to the report, the hazard included "personal hygiene, sanitation and drainage" as well as the backdoor of the property being sealed off and no fire exit windows present throughout the home.

Edith has now moved out of the home with her daughter making a full recovery and the mum recapped how she managed to escape the hellish home.

She said: "Let's just say once my estate agent came and saw it for himself he had us out within two days. We moved in on April 25 and moved out on October 26. The fire brigade started the process with environmental health after they came out. I have plenty of photos of the state of the house that were used for the reports too."

Sergeant Chris Rogers for South Yorkshire Police, said the police are trying to curb the criminal behaviour in the area and has admitted its a real cause for concern.

“We know that antisocial behaviour is a key area of concern, particularly on the Royal estate," Rogers said.

"As such, we engage in regular patrols – on foot and in marked vehicles – to ensure there is a consistent presence to deter anyone seeking to engage in this criminality."