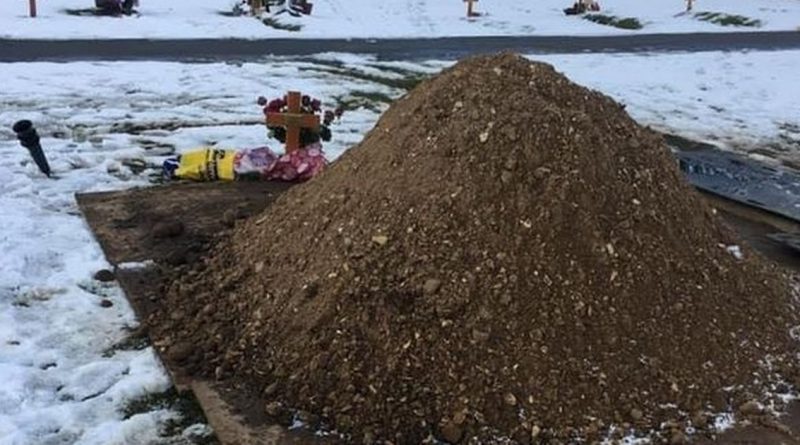 A council has "apologised unreservedly" after one of their gravediggers dumped a huge pile of dirt on top of their baby's grave.

It is also claimed the tragic child's toys and flowers were tossed aside as the work was carried out.

Angry Jack Campleman, 23, and Lauren Robinson, 22, were distraught after turning up at Bridlington Cemetery, Hull, on Tuesday afternoon to visit four weeks after his death.

A spokesman for East Riding of Yorkshire Council "apologised unreservedly" to the family, Hull Live report.

The couple claim the widow of a man buried next to their son had even found the teddies and flowers left for him on her husband's grave.

Devastated Jack said: "I just couldn't believe it at first. I couldn't get my head around it, especially with what we've already been through in losing him. It wasn't easy, it was never going to be.

"So when we finally had a place to lay him to rest and someone goes and does that, it wasn't nice."

Jack said they had been told the worker had "nowhere else to put it" when asked why the new plot was being placed so close.

He added: "From the pictures you can see there's plenty of room, it's a brand new plot.

"And even if there was nowhere to put it, there's a baby's grave there. Just find anywhere else.

"We have been through enough as a family. We don't need any more."

Paul Bellotti, director of communities and environment at East Riding of Yorkshire Council, said: “We want to sincerely apologise to Oliver's family for the additional stress and upset caused, and we have contacted them today and offered to meet with them to discuss this regretful incident.

“When preparing a grave for burial, it is normal working practice to lay the soil temporarily on an adjacent plot as this is the safest and most practical way to ensure minimum disturbance to the area.

“However, we will review our procedures for the future to avoid this situation occurring again.

“The grave has now been returned to its original condition and we would again like to unreservedly apologise to the family.”

Little Oliver was born with mitochondrial disease, a rare condition that affects the part of the body's cells responsible for generating energy.

When the mitochondria malfunction, it can cause serious problems throughout the body, including organ failure.