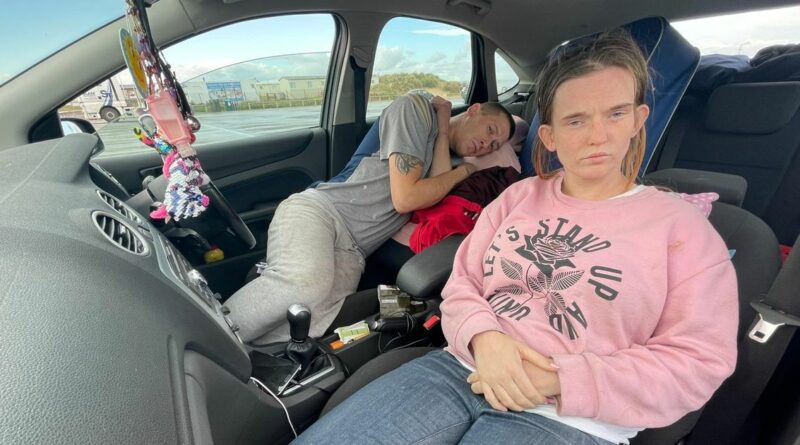 A couple living off Greggs sandwiches fear they could be stranded in their car for Christmas.

Judd Day, 33, and Jade Wass, 26, have been forced to live in their Ford Focus and wash in the sea or supermarket every day.

The couple moved to Birmingham to be closer to Judd's family – but after issues with their flat, they moved back to their hometown in the North East in September.

They thought they would be rehoused, but claim complications with Middlesbrough Council have left them trapped with nowhere to go.

The parents, whose children live with their grandparents, say they are “grateful” for the public's generosity, including donating blankets and money for food.

Speaking to The Sun, Jade said: "I think we will be here for Christmas most likely, but we don't want to be.

"We've even begged the council to put us in an emergency accommodation which they did for two nights before making us leave.

"It's embarrassing seeing people coming past and looking and laughing at us. They should put themselves in our position and see how they feel."

Judd claims he and his partner have to spend £15 to £20 a day on petrol to get around, buy food and keep the engine on at night.

"Then we have to rely on buying takeaways, sandwiches and coffees from places like Greggs and the local bakers," Judd added.

He added that they have two meals a day.

The couple claim the money they get on benefits is only lasting them two-and-a-half weeks.

"The rest of the time after that we have to ask strangers to see if they have any spare change," Judd said.

"We're so cramped in the car, if we were in a house I would at least be able to be smart and get clean."

Judd previously told how they had locked themselves in the disabled toilet in Morrisons "to wash our privates and wash our hands in the sink."

Birmingham Council previously said they had made a referral to Middlesbrough Council, but could not confirm if accommodation is still available for them in the city.