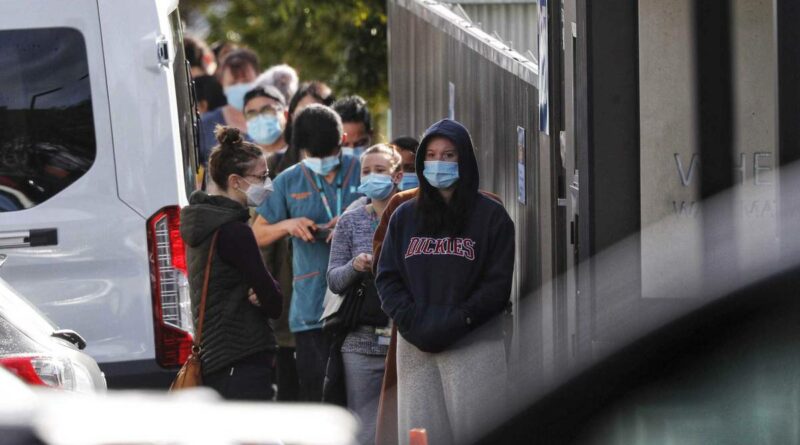 COVID LATEST
* Covid-19 cases have been confirmed in Wellington
* At least 30 community cases in total, more than 120 locations of interest (full list below)
* Cabinet to announce lockdown extension decision at 3pm today
* Massive loophole: Locals worried as Aucklanders try to book holiday homes in lockdown
* Lockdown Read: Inside the weekend Delta came to town
* Unpicking the cluster – The school family, the teacher, the tradie flatmate and their pals
* Auckland economy losing $100m a day during lockdown, says council
* Matthew Hooton: NZ health system can’t look past lockdown
* Liam Dann: Why NZ economy can survive a lengthy lockdown
* Your guide to surviving that long wait for a Covid test
* Everything we know so far about the Wellington cases

The level 4 lockdown is set to be extended nationwide until at least early next week after confirmation the outbreak has spread to Wellington.

The Covid outbreak which plunged the country into lockdown is believed to have ballooned to at least 30 community cases and threatened two of the country’s biggest hospitals but officials warn there will be more cases.

The Ministry of Health is set to announce the latest case numbers and details at 1pm – as the country waits with bated breath to find out whether the nationwide level 4 lockdown will be extended. Auckland and Coromandel are already subjected to a 7-day lockdown.

Cabinet is meeting today to make a decision on whether to extend the three-day level four lockdown the country went into at midnight on Tuesday.

Prime Minister Jacinda Ardern said at the time it was likely Auckland and the Coromandel, the areas where the first confirmed case had been, would be in level 4 for at least seven days.

Ardern is holding a press conference at 3pm today at which she is set to announce Cabinet’s decision.

Yesterday director general of health Dr Ashley Bloomfield said the number of confirmed cases had grown to 21. Another was confirmed this morning as Auckland’s North Shore Hospital closed its emergency department after the confirmation a patient treated there had tested positive for the virus.

As of yesterday, all the confirmed cases were in Auckland – welcome news for the rest of the country.

However the Herald understands the outbreak has ballooned to at least 30 cases with at least two confirmed cases found in Mirimar, Wellington.

In Auckland, thousands of secondary school pupils, their families and staff are now under isolation orders after it emerged that, along with Avondale College, students from Northcote and Lynfield colleges had also tested positive.

In Wellington, the Capital and Coast District Health Board referred any questions about the potential Wellington cases to the Ministry of Health, which is due to provide an update at 1pm.

It also emerged this morning that a temporary postal worker, who worked at Auckland’s operations centre in Highbrook, also tested positive after being at work on Monday.

The number of locations of interest listed on the Ministry of Health’s website has also grown with 148 visits to 123 exposure sites that include large Auckland malls, the casino, schools, churches, playgrounds, shops, night clubs and eateries.

One modeller puts the number of cases reaching 100 in coming days given several superspreader events that took place at the weekend.

But, there was a spark of hope in Ardern’s announcement yesterday that the source of the outbreak appeared to have been found.

Genome sequencing linked the outbreak to a traveller in MIQ who returned from New South Wales on August 7. On August 9 he tested positive for Covid 19 and was moved from the Crowne Plaza to the Jet Park quarantine facility.

Ardern said it appears that somehow that person had passed the virus on during his trip home to New Zealand time, at the Crowne Plaza, during the transfer or at Jet Park.

She said the focus now was on finding the missing links as well as tracing the virus downstream.

The good news is the virus can’t have been circulating in the community for more than 11 days before lockdown.

The bad news is the Delta variant is much more contagious and it remains to be seen how far it managed to spread during that time.