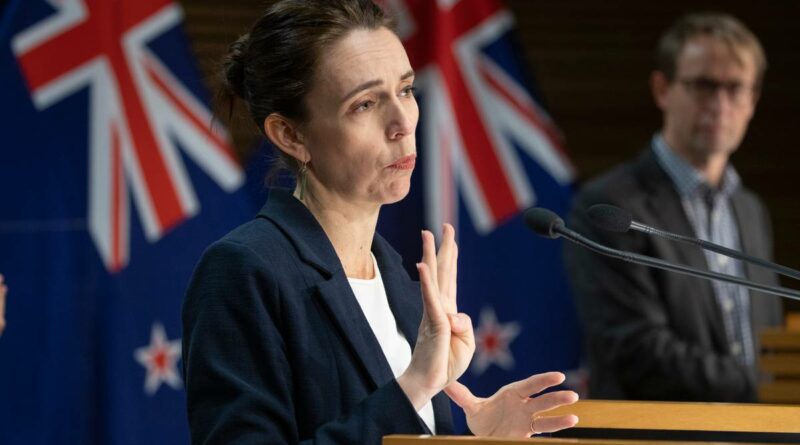 Six babies under the age of one have caught Covid-19 in the Delta outbreak, director general of health Ashley Bloomfield says.

Bloomfield said that news was “sobering”, although none of the children who have tested positive are in hospital.

There are 49 new cases of Covid-19 in the community today – the lowest in six days,Bloomfield said.

A Corrections officer at Springhill prison has tested positive for the virus. There are 23 staff who had contact with that person. They are isolating and getting tested. There are 123 inmates in the unit where the staffer worked, they have been segregated and all will be tested.

The Corrections officer was fully vaccinated.

Sixty-six per cent of new cases reported yesterday were household contacts. Seventy-seven per cent did not create any exposure events.

Of the cases reported yesterday, only 23 per cent are considered to be infectious in the community.

The cases could have been visiting the supermarket or have been an essential worker, Bloomfield.

The reproduction rate is remaining under 1, and “we are successfully breaking chains of transmission,” Bloomfield.

Thirty three people are in hospital, 8 in ICU, two are being ventilated.

The youngest person in hospital is 18, Bloomfield said. Two-thirds of cases in the outbreak are under the age of 34.

Most of the people in hospital with Covid-19 are in older age groups, Bloomfield said. It seems hospitalisation rate of Delta is twice of other strains, he said and noted that 6 – 7 per cent of cases are in hospital.

Bloomfield reminded people that it is safe to receive hospital-level care under alert level protocols.

There were 16,755 tests processed nationwide yesterday.

Regions outside of Northland and Auckland move to alert level 3 at midnight tonight.

Prime Minister Jacinda Ardern said some people who are isolated and who need child care support can bring another person into their bubble under alert level 3.

Contactless delivery can occur but all staff are legally required to wear a mask for outwardly facing businesses such as supermarkets and petrol stations.

The “golden rules” for everyone south of Auckland: Keep your distance from people, continue working from home if possible and keep children at home with you. They should only go to school if parents are essential workers.

Travel is restricted for work for those needing to pick up goods in a contactless way.

From tomorrow anyone aged 12 or older can book a vaccine.

Funerals, weddings and Tangihanga are allowed for up to 10 people.

Businesses must be contactless and meet requirements such as wearing face coverings to operate.

Ardern also issued an update on the wild weather in West Auckland today and said fire and emergency staff responded to370 incidents involving flooding, power lines and trees down.

If people are in need in shelter, they should report to the Auckland Council building in Henderson, Ardern said.

There will be some bubbles by necessity that are joining others simply because they need shelter, Ardern said.

Auckland will remain in level 4 for two more weeks, while the rest of the country south of Auckland will move to Level 3 at midnight today.

All going well with testing, Ardern said yesterday Northland would move to level 3 at 11.59pm Thursday.

This morning Covid Response Minister Chris Hipkins told Newstalk ZB it was still too early to say whether yesterday’s lower case numbers was a trend, but he would be keeping his fingers crossed.

He wanted to see the numbers drop and stay low but it was still too early to say if that would happen.

Hipkins told Newstalk ZB they were about to “ink a deal” on new supplies, however Ardern dubbed those reports “speculative” when talking to RNZ today.

Hipkins confirmed Government officials were having “active conversations” about bringing in more vaccine to the country and those details would be shared “once they were signed on the dotted line”.

He said they had always been pushing hard to get vaccine into the country earlier but their order would total 10.1 million doses by the end of October so if each Kiwi had two doses each they would still have some left.

He was hopeful of being able to tell Kiwis about more vaccines coming to New Zealand in the next couple of days.

However, Ardern was a bit more tightlipped when questioned on RNZ.

Asked about reports that the Government was close to a vaccine deal with another country, Ardern dubbed that “speculative”.

“We are working hard to increase supply,” she said, declining to get into specifics on exactly how.

She wouldn’t be drawn on if that was a deal with Pfizer or another country.

“It is not the case that we are going to run out,” Ardern said.

If more vaccines couldn’t be obtained, then the country would revert to its original plan of delivering 350,000 jabs a week.

Despite confirming the country wouldn’t run out of vaccine, Ardern said health officials were trying to figure out whether they can meet the current high demand.

She said the worst case scenario would be for vaccinations to go back to the roll-out plan made before the current lockdown.

Asked by Newstalk ZB about why South Islanders should still be getting the vaccine when the outbreak was centred in Auckland, Hipkins said they didn’t want any vaccination appointments to be cancelled anywhere.