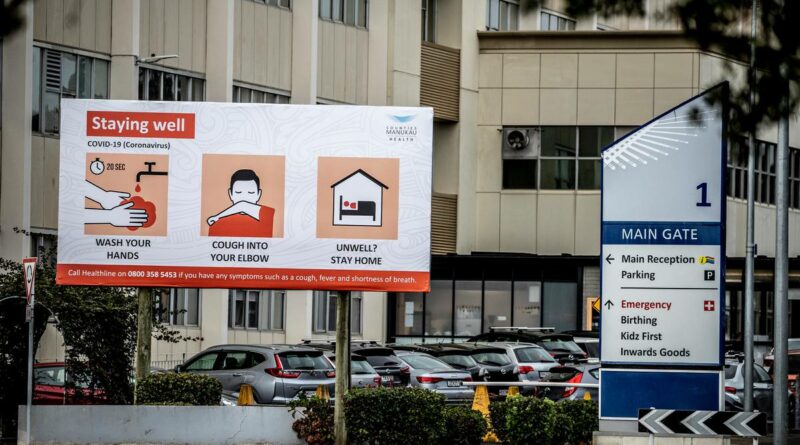 A person with Covid-19 at Middlemore Hospital was able to self-discharge after learning of their positive test – one of two new exposure events at the hospital, affecting dozens of close contacts.

Health officials announced the new exposure events last night, saying two patients had tested positive on Wednesday night – but they say the risk around the patients is low, despite 66 people being deemed close contacts.

One of the two patients chose to “self-discharge” after learning about their positive result. That person’s whereabouts has not been confirmed by the Ministry of Health – all it said in a statement was that they were “now being managed by the Auckland Regional Public Health Service (ARPHS)”.

Sixty-six patients have been identified as close contacts of the two patients. Currently, there are 34 who remain at the hospital and they have been moved to an isolation ward.

Thirty-two patients who have been discharged or did not require admission following their visit are being followed up for testing.

Both cases of Covid-19 arrived at Middlemore’s Emergency Department on Wednesday night seeking treatment for issues unrelated to coronavirus.

The first was a patient who answered no to all screening questions but hospital staff noticed a “very minor cough”.

The person was then isolated and tested, which returned positive.

The person is now in Middlemore’s Covid-19 isolation ward.

The second case was a patient who answered yes to one of the screening questions, which was also a symptom consistent with the non-Covid-related reason for going to the hospital.

This person was then tested and given initial treatment.

After learning of the positive result, the second patient chose to self-discharge.

They are now being managed by the Auckland Regional Public Health Service (ARPHS).

“All staff were wearing the appropriate PPE and as such no staff members are required to stand down,” a spokesperson said.

“The risk to public health of these events is deemed to be low,” the Ministry said.

More information is expected at the 1pm press conference on Friday.

Speaking about the second person who tested positive – and then self-discharged after being told they had returned a positive result – he said officials are providing support for that person.

He said he had not been told about that person’s circumstances.

However, he explained that previously, he has been told some people who are told they now have to self-isolate after testing positive for Covid find the whole situation overwhelming.

There are other circumstances to take into account – with some people feeling overwhelmed because they have people at home, such as elderly members of the family, who depend on them.

“They will prioritise their families, their economic needs, over their own personal health.”

Put to him that it looked as if level 2 may be up in the air at this stage, Aupito said we simply needed to trust the advice from our health officials.

Experts say a move to level 2 for Auckland next week is still looking “very risky” despite a drop in new and unlinked cases.

Regardless of any changes decided at Cabinet on Monday, Prime Minister Jacinda Ardern today said the removal of the boundary around the region will not be up for consideration.

University of Auckland associate professor of public health Dr Collin Tukuitonga said he was optimistic cases would continue to decline through next week, but “not get to zero in a hurry”.

Given the nature of the current clusters spreading through transitional housing, which included people living in “very difficult situations” and were often less trusting of authorities and willing to engage and get tested, the tail of the outbreak threatened to “get very long”, he said.

“That is why we really need a targeted approach, engaging people from those communities that people trust.”

There were 19 new cases announced on Thursday, down from 45 the day before but still a vast increase from the days prior.

Eighteen of the cases were in Auckland and the other is a child who attended Mangatangi School, who had been isolating. The school was at the centre of an outbreak earlier this month after children of a gang member freed on parole became infected.

Sixteen were known contacts, and director-general of health Dr Ashley Bloomfield said they were expecting another 30 cases in the coming days, as 19 of the newer cases were linked to emergency or transitional housing.

Bloomfield said the transitional housing sub-clusters were a mix of hostels, motels and houses – and there was often movement between those places.

There are now seven suburbs of interest. On how the outbreak was evolving, Bloomfield said there were initially four clusters that were active.

There were now several subclusters: two newly identified subclusters were a southeastern Auckland household’s subclusters and a West Auckland subcluster of households. Bloomfield said the new cases were coming from those two subclusters.

Bloomfield urged people from all suburbs of interest to get tested, regardless of whether they were symptomatic or not.

Despite a number of mystery cases circulating, consideration was still being given to whether that alert level would change, and that decision would be made by Cabinet on Monday, Ardern said.

However, she said she wanted to provide some certainty that the boundary restrictions would remain in place, even if that happened.

“We want to get to a position when we can have movement again,” she said.

“Of course, we want to get that movement back, but it needs to be safe.”

This would mean the border would remain up through the school holidays, which start next week.

When asked if the border would remain in place until vaccine rates had climbed above 90 per cent, Ardern said that was not a “connection” being made by the Government.

However, high vaccine rates were the key to lifting all restrictions, she said.

University of Auckland emeritus professor of medicine Des Gorman said such a border restriction could be “there for a while”, and could eventually see a situation where people needed to be vaccinated and return a negative test to pass through.

“I think our contact tracing and our testing capacity has been so poor and our hospitals are so unprepared and the Government will always take a very low-risk approach.”