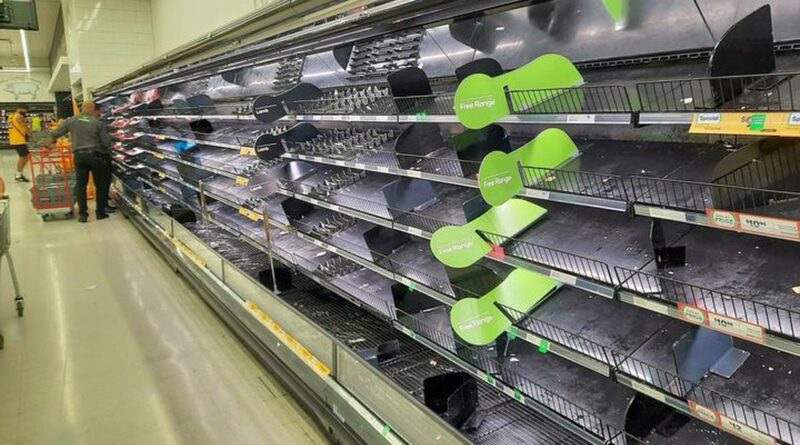 Countdown is bringing in reinforcements from Australia to help keep shelves stocked as Omicron benches hundreds of staff here.

You may have noticed a bit of empty real estate at the supermarket lately – your cat’s favourite food off the menu, and some empty freezers.

Countdown says it has all the products, but as spokeswoman Kiri Hannifin explains, it’s about distributing it.

She told RNZ Checkpoint the supermarket chain is being hit hard by people either having Covid-19 or isolating, with Auckland particularly affected.

Today there are 1800 people off work from its 22,000 strong workforce. “The good news is there’s lots of food so that’s great.”

She says the company has for months been planning how it will cope based on what happened in Australia.

However, the situation “changes every day and it’s always a bit of a challenge to muddle through but there’s lots and lots of food around”.

To get supplies into customers’ hands, Countdown is paying to fly over a crew of New Zealanders now able to come home without having to go into MIQ or isolate.

They will help out in the chillers ensuring products such as butter, hummus and yoghurt are available for sale.

“We’re bringing a crew of them over to here to help us … so that’s just a handful but enough to take off some pressure,” Hannifin says.

The “all hands on deck” approach has also seen support office workers switch into the distribution centre (where up to 45 per cent of staff are away) and they are getting tips on handling forklifts as part of their new roles.

Members of Hannifin’s sustainability team have moved over to helping out in the e-stores, while other usually office-based workers are based in the “dark” supermarkets which specialise in sending grocery orders to those in isolated communities.

“So we’re absolutely robbing Peter to pay Paul but I guess first of all upskilling at the same time, but we’ve done it before, we did it in August [during the Auckland lockdown]. We shifted people around and I’m just very grateful that our team is so open to pitching in.”

It’s not only Countdown staff who are ill or isolating – independent drivers, suppliers and transport systems are also being hit.

“So it’s kind of like a bit of a Mexican wave. So we’re getting through, it’s not too bad. Everyone’s pitching in and doing what we can to help but yeah, the next few weeks will be a bit muddly for us,” Hannifin says.

She says Countdown is also juggling which items are loaded into the trucks that head to supermarkets with new supplies.

“We’re rotating and making sure we get the kind of staples and the priority food out. So there might not be six different types of capers, but there’ll be one type of capers, but just for a few weeks …”

The chain is also ensuring it looks after communities such as Waiheke and Queenstown where there are not many different food suppliers.

Hannifin is pleased to see some staff are already returning from illness or isolation. “So it will get better. It’s just a bit mucky.”