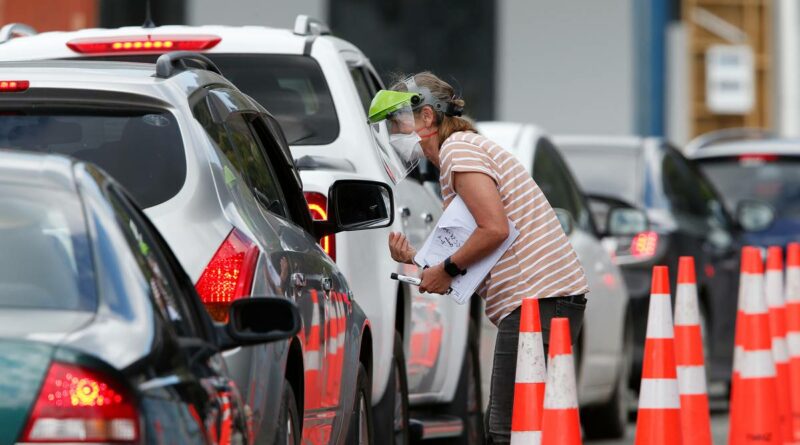 Five people with Covid-19 have died and there are a record 12,011 new community cases of Covid-19 in New Zealand today, the Ministry of Health says.

Two of the people who died were being cared for on Auckland’s North Shore, two were in Waikato, and one in Tauranga.

“Our thoughts and condolences are with the patients’ family and friends. Out of respect, we will be making no further comment,” the ministry said.

There are 237 people in hospital with an average age of 52.

Three people are in intensive care.

Today’s new case numbers are a 95.7 per cent increase over yesterday.

New Zealand’s positivity rate – the percentage of tests that are positive – is now 27.4 per cent.

Yesterday, the country’s reported positivity rate (via PCR tests) for the previous 24 hours was 10.9 per cent.

The location of one PCR result is unknown.

The location of seven cases identified via RATs is not yet known.

There were 19 cases detected at the border.

There are now 39,413 active Covid-19 community cases in New Zealand.

There were 25,461 booster doses administered yesterday and, overall, around 68.8 per cent of the eligible population have received been boosted.

Today’s increase in Covid-19 cases – up 5874 on yesterday – was not unexpected, the ministry said.

“These case numbers and hospitalisations are another reminder that vaccination is our best defence against the virus.

“The further increase in cases today is not unexpected given the ongoing spread of Omicron and wider testing achieved from the combined use of Rapid Antigen Tests (RATs) and PCR.”

The ministry usually provides the vaccination status of those in hospitals in Auckland and Northland – but this information has been delayed today due to a technical issue.

And the seven day rolling average for PCR testing is 28,795.

There are 6.9 million Rapid Antigen Tests in the country, the ministry says.

The Ministry of Health said phase three was “a more devolved model” to ensure health resources are focused on those who need it most.

It was very important to the overall response that people self-report positive results for RATs through My Covid Record so heath officials could understand the size of the outbreak, the ministry said in a statement.

“We’d like to thank the thousands of people who have been tested and already self-reported positive RAT results.”

The ministry was expected to see the high demand for Covid-19 testing across the motu continue.

While there are still significant global supply constraints, the ministry said enough RATs had been secured to help New Zealand through a widespread Omicron outbreak in the coming months.

“Over the past two days, 5.2 million RATs arrived in the country. Another 10 million will arrive over the weekend, bringing our total supply to more than 22 million by Monday.”

Tests were being shipped to community testing centres, GPs and pharmacies across New Zealand.

Critical services and businesses who needed them as part of the Close Contact Exemption Scheme could also access them.

People who used a RAT would get their result within 20 minutes which would help identify cases sooner, reduce testing wait times, minimise disruption to business and ensure critical services and infrastructure workforce could continue operating.

Across all ethnicities, and including people who were vaccinated outside of New Zealand, 96.5 per cent of those eligible and aged 12 and older have had one dose and 95 per cent have had two.

For eligible Māori aged 12 and older, 90.8 per cent have had one dose, 87.1 per cent have received two doses and 57.9 per cent of those due for their booster have had it.

Across all ethnicities, 49.1 per cent of children aged 5-11 have had their first dose of the Covid-19 vaccine and 0.5 per cent have had two.

Just eight Covid-19 cases were detected at the border while 205 people were in hospital fighting the virus. Two were in ICU or HDU.

All school students would now be able to participate in school activities despite if they were vaccinated or not and gathering limits would no longer apply when unvaccinated students were participating.

40 million faces masks, portable air filters and CO2 monitors are being distributed and schools will have access to 700,000 rapid antigen tests if they need them.

A disparity between the new isolation rules and the border rules announced earlier this month has been flagged by Director-General of Health Ashley Bloomfield.

Despite isolation requirements changing, people travelling under the new border rules from February 27 would get to skip MIQ but would still need to self-isolate.

Bloomfield has advised the Government of the matter.

A PCR test will also no longer be required to verify a positive RAT result – and RATs will be available across the country from testing sites, GPs, pharmacies and within workplaces. People will be able to self-report their positive results and notify contacts.

RATs will be free to those who require them for testing, and available for purchase for about $8 to $10.

Bloomfield said the PCR tests have served us well and had helped us understand the situation, but it was now at the stage where rapid antigen tests are the better option – given the high number of Covid cases in the community.

Meanwhile,calculation error on the part of the Government means vaccine mandates cover a quarter fewer people than initially believed.

It means the percentage of people covered by a Government mandate is just 30 per cent, not 40 per cent like the Government initially said.

This comes as the anti-mandate protest on Parliament grounds enters day 18.

While activity is quiet this morning, children were caught up in moves over territory yesterday as police manoeuvred more concrete blocks into place.

As riot police moved from Lambton Quay to a Bunny St blockade, several officers barged into camping areas and pulled some children out, along with adults caring for them.

The children were then stuck between riot police and a second line of police, until they were let through and able to cross the road towards the railway station.