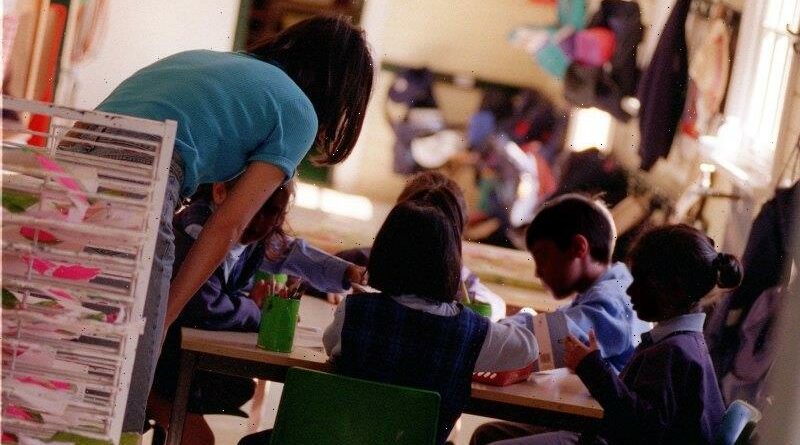 Schools affected by COVID-19 teacher absences say they are burning through cash for casual staff, and with a shortage of relief teachers, principals are scrambling to cover gaps.

Chatham Primary School principal Chris Cotching said the absences had become ongoing and expensive. He had three teachers away and said it cost his school $2100 a week for one casual relief teacher (CRT). That’s more than $6300 spent in one week from the budget of $13,000 a term for casual relief staff. 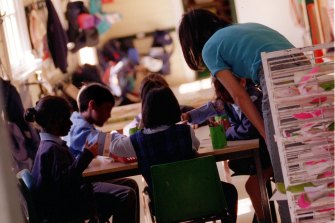 Victorian school budgets are being tested by the ongoing need for casual relief teachers.Credit:Quentin Jones

“I’m terrified, very, very concerned that we are going to run out of significant money to pay CRTs, some schools have money in their bank accounts sitting there, most primary schools haven’t.”

“[Schools] have limited money to cover teachers if they are away. What the government needs to do is to take the shackles off the relief budget and give them funds. Some schools will have enough money to manage it, but most won’t,” Mr Cotching said.

Andrew Dalgleish, president of the Victorian Principals Association, said schools would usually be spending most of their relief teaching fund during term two or three, not as early as March.

Although Blackburn Primary School has not been hit too hard by teacher absences, principal Andrew Cock said with winter coming, he was already accepting the fact they’d be going beyond their budget.

“We’re looking closely as to how we will manage staff absences with our budget and manage all the other things that make our school such a wonderful place.”

On top of the cost, some schools simply can’t get replacement staff”, said Tina King, president of the Victorian branch of the Australians Principals Federation, and in some cases, programs were being compromised.

Daniel Mundy, owner of education recruitment agency ANZUK, said they were experiencing a higher demand for casual relief teachers than they normally would be at this stage of the year.

He said a lack of international teachers was also making it tough to fill gaps, but they weren’t the major source of their staffing.

“We still have a really good pool here, that pool has been engaged a lot sooner,” he said.

A surge workforce of retired or inactive teachers was set up to help schools fill vacancies and Scoresby Secondary College principal Gail Major has already dipped into the pool. Education staff are classified as critical workers, allowing household contacts to continue working if they are asymptomatic and return daily negative rapid antigen tests.

Other principals were less willing to call on the retired workforce. Berwick Lodge Primary School principal Henry Grossek said he had never experienced the inability to fill vacancies at this level and is possibly going to have to drop programs.

“[Casual relief teachers] just aren’t there. We are going to need to take teachers away from other programs, or just not do it.”

He said he’d talked to a lot of retired teachers who didn’t want to come back.

“Retired teachers are retired for a good reason, they’d had enough,” he said.

“They are kind hearts, but if we have a system relying on people who have left… and coming back to fill a gap, then our system has major issues.”

Instead, in some schools, specialist teachers and principals were covering absences. Other schools were facing the prospect of splitting classes, combining classes into a school hall or redirecting funds.

Ms Major said there would be more issues when teachers start running out of sick leave, “then we are going to face another problem. What’s going to be the implication there?” Ms Major said.

“When your CRT budget is gone, it is gone. You then have to cut from somewhere else. There is a limit to where you can cut from. It has certainly hit hard the last couple of years.”

A Department of Education spokeswoman said they had seen a decrease in teacher absences in comparison to last year and that there were “no significant workforce challenges at any individual schools”.

From the start of term 1 to March 1, there were 2989 positive results reported by teaching staff in Victorian government schools.

“We’ve supported Victorian schools to stay safely open throughout term 1 – and we’re working closely with any schools facing workforce issues as a result of COVID-related staff shortages,” the spokeswoman said.

But Mr Cotching said that was not his experience. “I’ve made it really clear we need extra money in our budgets. I contacted the financial support unit via the COVID booklet, the advice they said was they’ll provide a financial coach,” he said.

“I don’t need a financial coach, I know how to run a school. I need the resources to make it happen. If the Minister wants the schools to function the best they can, the only way they can do it is to provide extra funds to teach kids.”

Mr Dalgleish said there had been a lot of goodwill from teachers and principals to “make sure we stay operational”.

“What I’ve seen and heard is there are pockets of schools that are being impacted quite significantly from COVID absences,” he said.

“And the school next to them is not. The further you head out regionally it becomes more difficult,” he said.