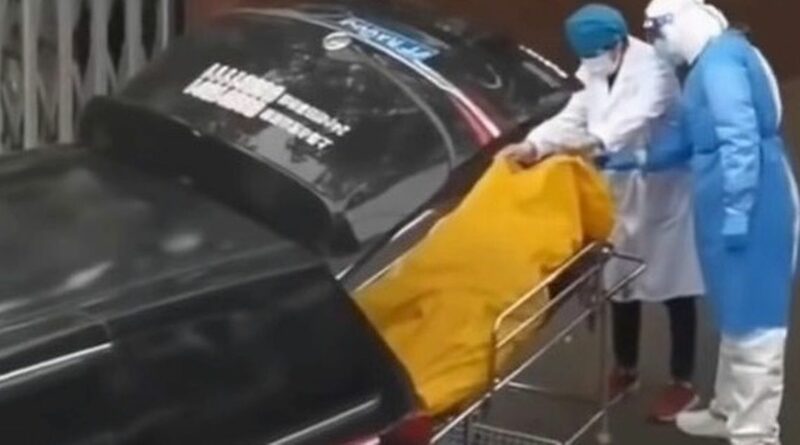 A Chinese pensioner came inches away from being cremated alive after nursing home staff sealed him in a body bag thinking he had died from Covid, it has been reported.

Strange footage from China shows hazmat suited nurses carrying the body bag with the alive pensioner to a hearse before noticing movement.

They then unzip the bag and find that the man is very much alive and moving about in the sack reports the Sun.

One worker can be heard saying: "You come here and see if he's dead? He is still breathing! Didn't you see he's moving?"

Another reportedly says: "He is alive, don't cover his face ever again."

It's thought the man was then taken to hospital for a check up.

The incident occurred in the Putuo District of Shanghai yesterday (Sunday, May 1) and it is understood authorities have launched an urgent investigation into how the man ended up in the bag alive.

It comes as Chinese authorities are scrambling to lock down Covid-hit parts of Beijing as the death toll in Shanghai continues to rise.

Fences have been put up around blocks of flats where infections were found sealing them off from the outside world. Residents in the eastern Beijing district of Chaoyang are being tested three times a week after a spike in the deadly virus.

The Chinese province of Shanghai has been the centre of the latest outbreak, the worst since Wuhan more than two years ago.

It's prompted a strict lockdown but despite these desperate measures 51 deaths were reported on Sunday, taking the death toll for the current wave to 138, reports Bloomberg.

Shanghai is one of China's biggest cities and has been in a strict lockdown for around five weeks now. Residents are being told to stay indoors with people testing positive being taken to quarantine centres.

Grim reports suggest authorities are rounding up pets and destroying them over fears they could be spreading the virus.

Other reports suggest people are taking their own lives, unable to deal with the pressure of an extended lockdown.