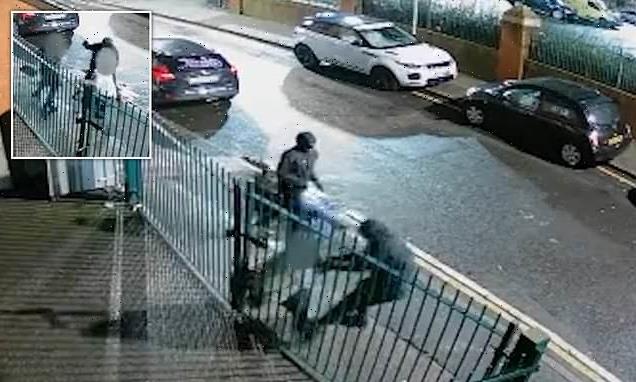 Video footage shows the moment two masked men attacked a mother and her pregnant daughter in the street and stole their car.

The clip, released by Greater Manchester Police, shows the two women – one in her 50s, the other in her 30s – walking in Denton on December 28 when they were approached by the duo and assaulted.

One of the attackers throws the pregnant woman to the ground and takes her car keys before making off with her Audi TT S. 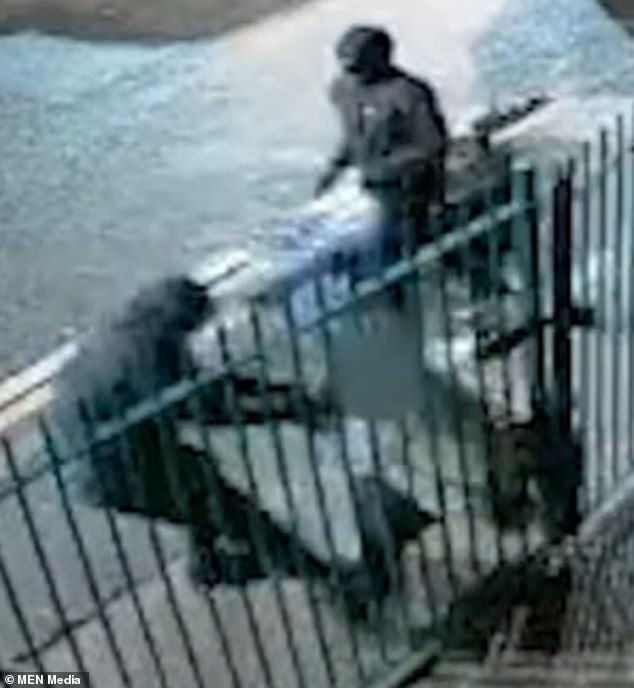 The two women – one aged in her 30s and pregnant, the other in her 50s – were walking in Denton, Greater Manchester, on December 28 when they were attacked by two robbers

Police said the victims had got out of the Audi moments before the attack.

CCTV footage shows the two women walking down Bond Street at about 5.20pm when two hooded men cross the road and walk towards them.

The mother and daughter initially stop to allow the two attackers to pass in front of them, before one turns and attempts to steal bags from the women.

The second attacker then runs back to the scene and grabs hold of the pregnant woman and throws her to the ground while the other robber grabs a bag from her mother.

Once the attacker manages to grab hold of the bag, both assailants run from the scene, and police say they got into the Audi and drove away.

No arrests have been made but Detective Sergeant Peter Goddard called both offenders ‘cowardly and dangerous’.

DS Goddard, from GMP Tameside’s Serious Acquisitive Crime Team, said: ‘We’re desperate to hear from anyone who may have information about this incident, which saw a pregnant woman shockingly thrown to the floor.

‘It is clear that these offenders are cowardly and dangerous individuals who will try and prey on vulnerable people in the street regardless of their surroundings or the time of day and we are doing all we can to catch them.

‘No arrests have yet been made but we are carrying out several lines of enquiry and hope that anyone who recognises these men – or who may have dashcam footage of a vehicle matching the stolen Audi’s description.’

After snatching the keys and making off with the Audi, the men drove onto Hyde Road in the direction of Hyde, officers added.

The following day a woman tried to fight off carjackers who stole her BMW in north Manchester seconds after she returned home from work. 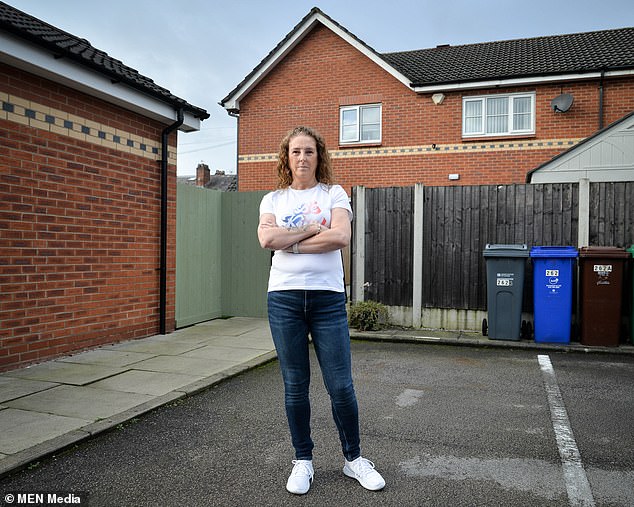 Elaine Roscoe, 54, ‘wrestled’ a robber for her car keys when carjackers struck outside her home in Moston, north Manchester on December 29

CCTV captured Elaine Roscoe ‘wrestling’ a robber for her car keys outside her home in Moston on December 29.

Offenders targeted her seven-month-old BMW m235i and followed her home, before striking as Ms Roscoe was gathering her belongings from the front passenger seat.

Speaking afterwards she said: ‘It’s horrible. It’s shocked me, it’s angered me. I think it’s every emotion you can think of.’