Cross-dressing man is scolded, pushed and ordered to leave a busy shopping area by Chinese police because ‘he is a bad influence’

A man wearing a skin-tight dress and high-heeled shoes was told off and violently pushed by police officers on a crowded street in China last week.

He and his two male friends, who were wearing heavy makeup and women’s clothes, were ordered to leave a popular shopping area in Suzhou, Jiangsu Province, when many pedestrians watched on.

Policemen claimed their clothing ’caused disturbance in public and had a bad influence on other people’. 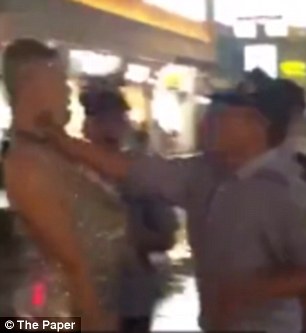 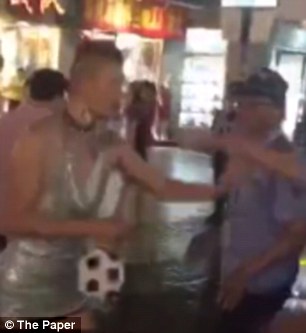 The man, wearing a short dress and high-heeled shoes, was shoved by police in China. He and his two friends, who were also cross-dressing, were told to leave the busy area in Suzhou 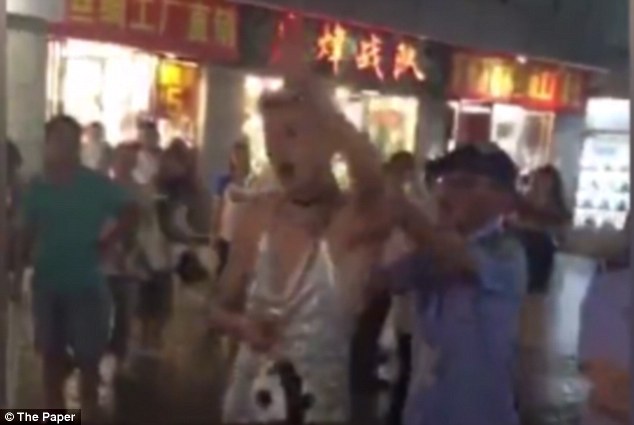 Video of the heated confrontation, released by Chinese news site The Paper, shows one of the three cross-dressing men protesting to the policemen of his rights to walk on the street in clothes he liked.

The incident was spotted on July 3 on Guanqian street in Suzhou.

‘What’s wrong with you? There are thieves, burglars and brawlers out there, you should go catch them, not us,’ asked the man in a silver halter neck dress.

One policeman was trying to criticise his way of dressing before the man cut in and said ‘what I wear is none of your business’ and ‘why would you care’.

One officer then immediately pushed the man back by violently shoving him by the neck.

According to Modern Daily, the three men were also wearing breast pads under their clothes.

Two of them can be seen wearing a tight vest and denim shorts with high-heeled boots.

‘It’s obvious that they are all men, with women’s clothes and makeup on. They walked like they were in a fashion show,’ one onlooker was quoted as saying. 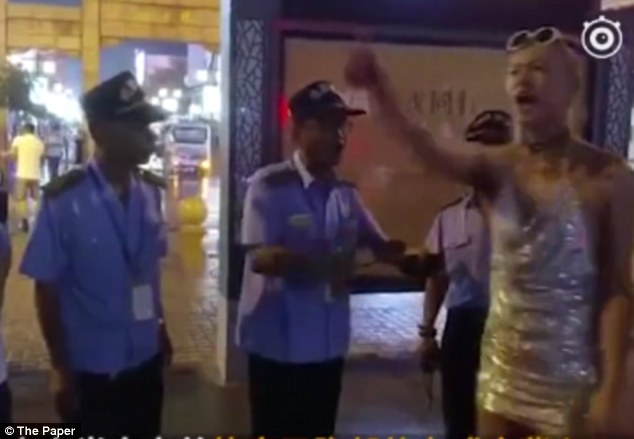 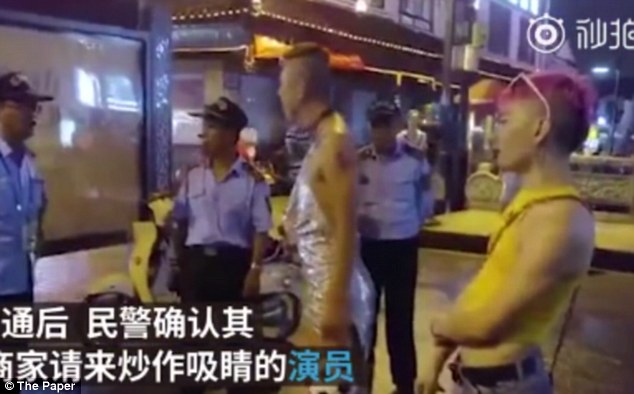 Gusu Police claimed that the three men were not actors hired by fashion retailers.

‘These three men are tourists travelling around the country. Their hobbies are to dress as women,’ said one policeman.

The police claimed the men caused disturbance in public as they attracted a large crowd to take pictures and videos of them.

The trio were given verbal warning and ordered to leave the area.

Although China is developing its economy fast, social stigma towards cross-dressers and the LGBTQ community still exists in most part of the country.

Homosexuality had been regarded a psychiatric disorder in China until 2001 when the Chinese Psychiatric Association removed the word from the list of mental illnesses, according to China News.

Many Chinese web users, however, have voiced their support for the three cross-dressers on Weibo, the Chinese equivalent to Twitter.

One Weibo user, with the username ‘__CHEER_’, argued: ‘Isn’t it someone’s freedom to wear the clothes (they liked)? Does the law prohibit men from wearing dresses?’

Another user ‘Shi Keyi’ said: ‘Who gives the police rights to control what clothes people wear?’

A third user commented: ‘These law enforcers should feel ashamed.’