D-Day hero’s incredible collection of WW2 secret escape items goes on sale – including dominoes which hide a map, a string vest abseil kit and an exploding lump of coal

A D-Day hero’s incredible collection of WW2 secret escape items including dominoes which hide a map and a piece of explosive coal is set for auction.

The set includes fountain pens with hidden daggers, a box of matches with a secret compass in the base and a string vest abseil kit.

It was collected by Arthur Muggeridge who served with the Royal Artillery and landed on the beach in Normandy on June 6, 1944.

The late ex-soldier amassed the haul over 50 years after he left the military following injury in D-Day. 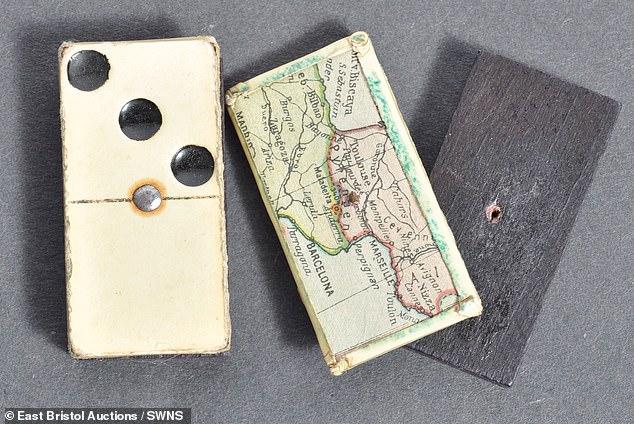 A D-Day veteran’s collection of British spy gear from WWII expected to fetch thousands of pounds will be auctioned in in Hanham, Bristol on May 22 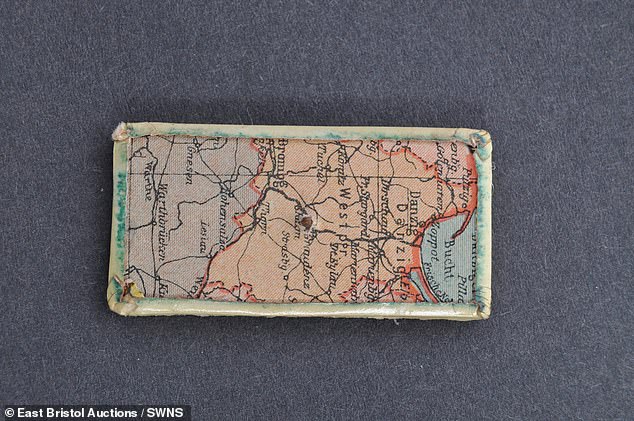 The collection includes dominoes which hide a map, fountain pens with hidden daggers, a box of matches with a secret compass in the base and a piece of explosive coal

Many of the items are the product of a secret organisation set up by the British authorities to conduct espionage behind enemy lines.

The ‘Special Operations Executive’ (SOE) ran under the leadership of Minister of Economic Warfare Hugh Dalton – and was largely unheard of during the conflict.

Its activities only came to light many years after WW2 had ended – a big part of which was sending items to troops in occupied territories.

The collection is being sold by East Bristol Auctions on May 22 as part of its ‘Military, History & Transportation’ event – and is expected to fetch thousands of pounds. 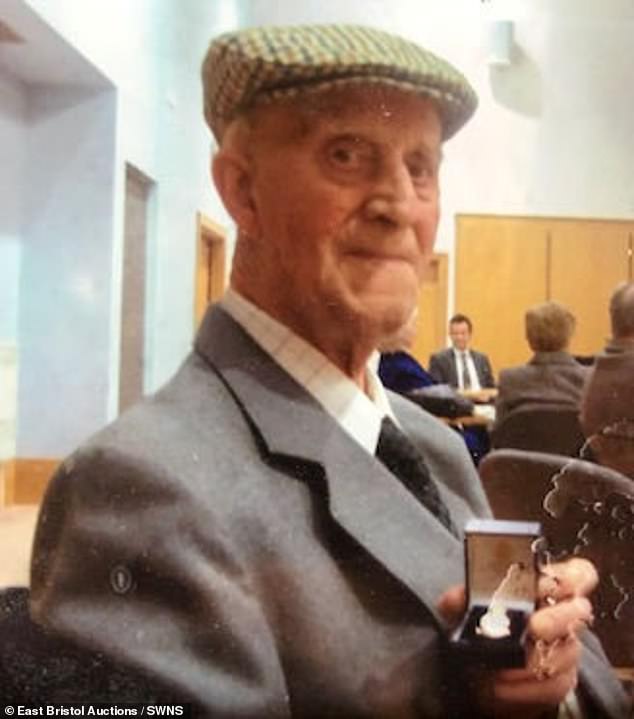 Arthur Muggeridge served with the Royal Artillery and landed on the beach in Normandy on June 6, 1944, and has sadly passed away

‘A big part of the SOE was sending secret items to troops in occupied territories.

‘Useful items like maps, compasses and even secret orders – anything to help them escape or evade capture.

‘Very often these items were ‘everyday’ items that were sent in aid packages to camps, and the way items were secreted was very often ingenious!

‘German prison camp officials wouldn’t think twice that an innocent set of dominos could do harm, but how wrong they were. 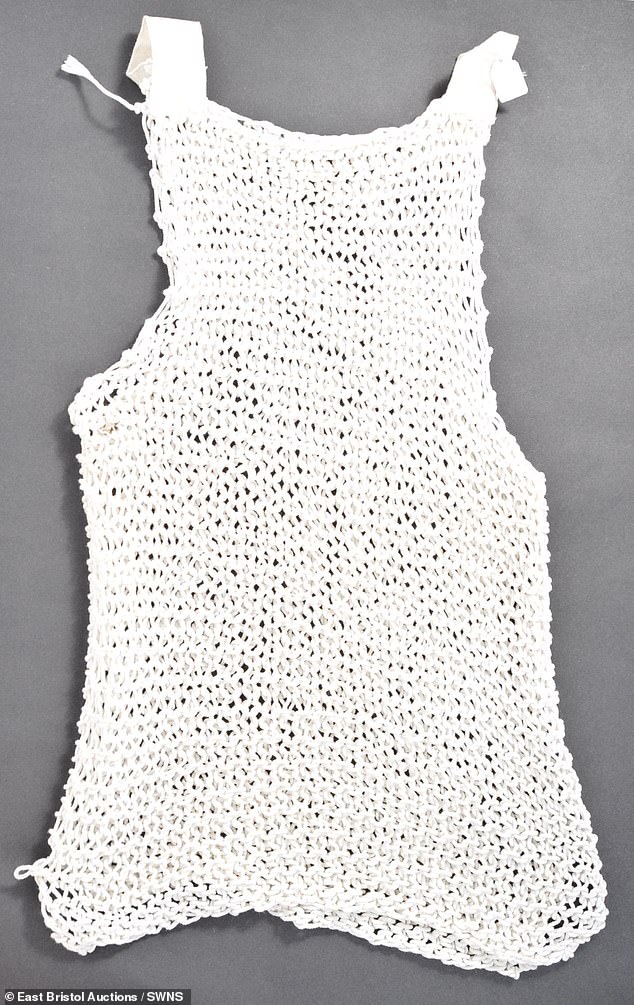 String vests were used by captured soldiers to form ropes they could use to abseil down walls. Several vests used together would be unpicked to form the strong rope

‘You can almost picture some RAF officers in their hut pulling apart these dominos and planning their escape.

‘It’s incredible stuff, both frightening and exhilarating at the same time.’

The ‘incredible’ string vests could be used to form a rope and abseil to freedom once unpicked and knotted together.

Mr Stowe said: ‘These string vests were made from a single piece of string, all knitted together to form a vest.

‘Not only could it keep you warm, but if you unpicked it, it formed a very useful and very long rope. 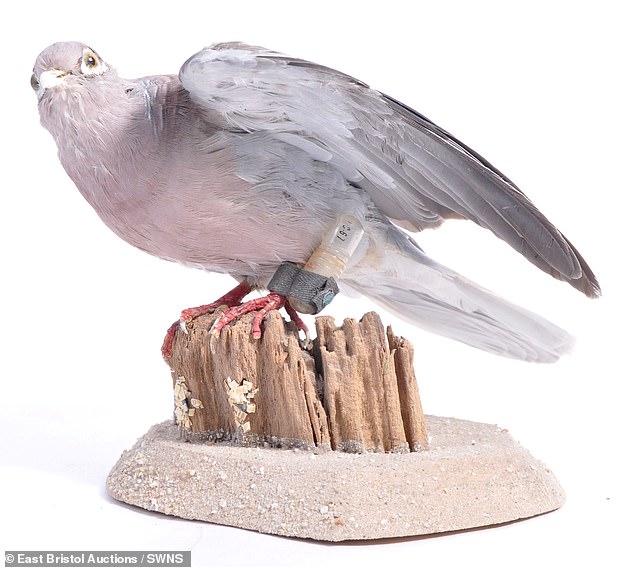 Two taxidermied ‘war pigeons’ are also included in the collection. The British Army used around 250,000 carrier pigeons for carrying important and secret messages and other purposes during WW2

‘Apparently if several vests were unpicked together one could form a strong rope – perfect for scaling walls.

‘It’s just the most incredible invention.’

Also featuring in the sale are two taxidermy studies of ‘war pigeons’, both complete with secret message capsules.

The British Army used around 250,000 carrier pigeons for carrying important and secret messages and other purposes during WW2.

An official Air Ministry ‘Pigeon Section’ was maintained throughout the period and there was talk of them being used to carry explosives or bio-weapons.

Although this was never put into practice, the carry of messages was. 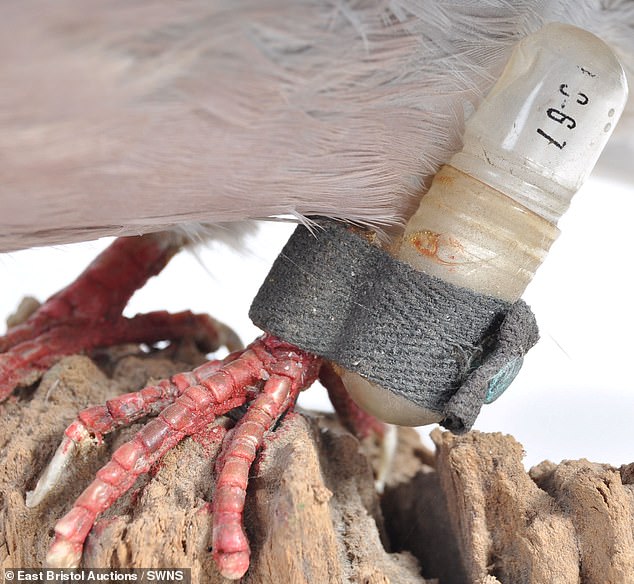 A small capsule was fixed to the foot of a willing pigeon and then set free to fly back to England.

In a world of listening devices and decoding machines, strapping your message to a pigeon’s foot was very often the most successful way of communicating.

Mr Stowe said: ‘All of these items are very special. They highlight not only the ingenuity of the time, but also the desperation.

‘Can you imagine being trapped in the middle of France during the war, and the only tools you have to aid you getting home safely are a map on the back of a domino, and a compass from your razor blade?

‘Terrifying. But it worked. People successfully made it back to Britain because of these items. These objects saved lives.

‘It’s really humbling – and a perfect example of finding little ways to help those in need. They are quintessentially British.

Mr Muggeridge was injured during the D-Day invasion, which is widely regarded as one of the key turning points in WW2, and he was forced to leave the army early.

‘His service in the Royal Artillery during the war led to a lifelong love of all things military.

‘I suspect his love for these items gave him the connection to the army he so desired after being injured and forced to retire early.’

The auction in Hanham, Bristol, will be broadcasted online due to current coronavirus restrictions situation.