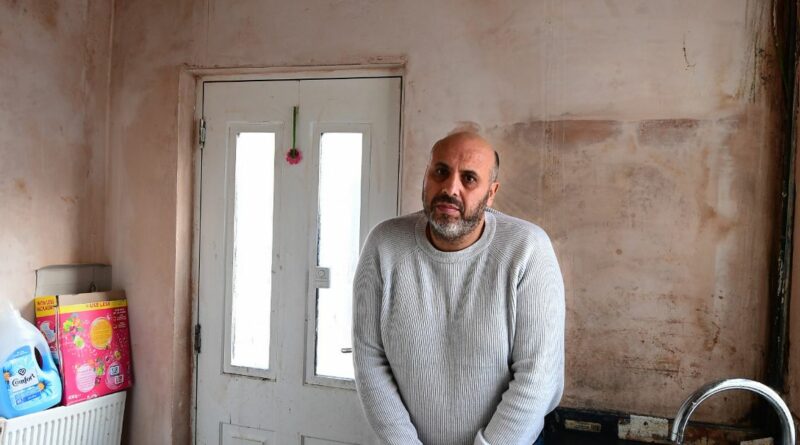 A disabled dad has issued a cry for help after being left in squalid conditions that are making him ill.

Rachid Yousef, 54, lives with his wife and children in a mould infested house in Walton that has seen his health decline, according to his GP. He has appealed to the council and housing agency but so far had little success.

Both parents and children have breathing difficulties said to have been caused by the house and heading into winter in a freezing house, it may likely get worse. Unfortunately this is just another setback that the dad of five has suffered since getting injured at work, the Liverpool Echo reports.

Whilst it is commonplace for an unscrupulous landlord to leave tenants in unbearable living conditions, the fact this property is owned by one of the biggest housing firms in the North-West makes it even more appalling.

Torus, the company in question, has discussed re-homing the family but has indicated they haven’t noticed any outstanding issues.

Mr Yousef, who moved to the UK in 2002, said that the house was in "really good condition" when he moved in but over time he started to notice a serious damp problem, leading him to dispose of furniture every six months. Because of this, the house is starting to become a financial drain as well as causing serious harm to his family’s health.

He told the ECHO: "I have to throw the furniture out every six months because of the damp. I have just had to get rid of the sofa. This is unbearable.

"Every day we wake up tired because everyone is coughing from the mould. I have to leave the heating on all day but it is freezing because of the damp in the walls.

"I am exhausted, depressed, and tired."

It doesn’t stop with the damp issues either. The house even suffers from a rat infestation, which with five children in the house, some as young as four, is particularly harrowing. The house got so bad 18 months ago that the youngest child, Sara, was rushed to the hospital with respiratory issues.

The family raised concerns about the health hazards of the house as early as 2019 but Torus is claiming all repair work has already been completed and were never made aware of any health concerns. Despite this, the Yousef family is still left in inadequate living conditions with no sign of any resolution.

Even doctor’s notes have had very little effect, with Mr Yousef’s GP going as far as to write a note to the housing association recommending that the family be re-homed. He even listed the various health issues that the 54-year-old is suffering from.

Now Liverpool Council have stepped in to try and put an end to the matter. A spokesman said: "Pest control have attended the property several times over the last few years but no other issues were raised with us by the tenant.

"We are extremely concerned to learn of the conditions in this property and will be in touch with Torus and the tenant to discuss the issues that have been raised."

Hopefully, there will be some form of resolution for the family soon, but at the time of writing, it is looking like it could be a cold, dark winter.