Don’t try this at home! Science teacher uses a toy car and two LEAF BLOWERS to build his children a fairground-style ride in their back garden

A father known as the ‘nutty professor’ has built a fairground-style ride for his children in their back garden – and it’s powered entirely by leaf blowers.

Jacob Strickling, who runs the YouTube channel Make Science Fun, came up with the invention after using the tool to push his son Samuel, nine, on a swing.

The idea inspired him to use an old Batmobile car, some wood scraps, screws, two leaf blowers and rope to build a fairground-style contraption. 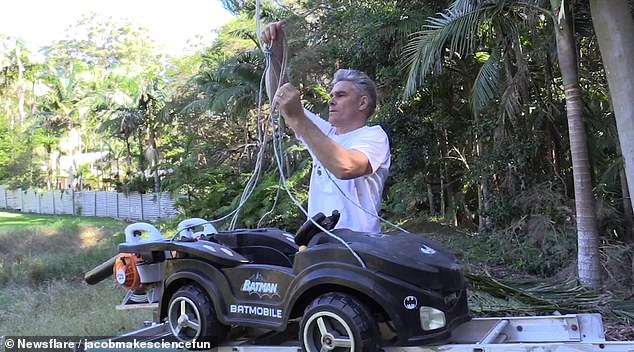 Samuel was first to test the invention but the car was propelled surprisingly fast by the powerful blowers and, as it went higher, it collided with a tree, knocking off one of the makeshift engines.

The youngster declared the ride to be ‘too dangerous’ and went back inside the house.

Mr Strickling, from Australia, then persuaded his daughter Mikalah, 11, to try the leaf-blower-propelled Batmobile.

After several collisions, she too decided she’d seen enough and walked away.

‘All’s well that end’s well,’ declared Mr Strickling, ‘although the neighbours kids won’t be allowed to use this particular ride!’ 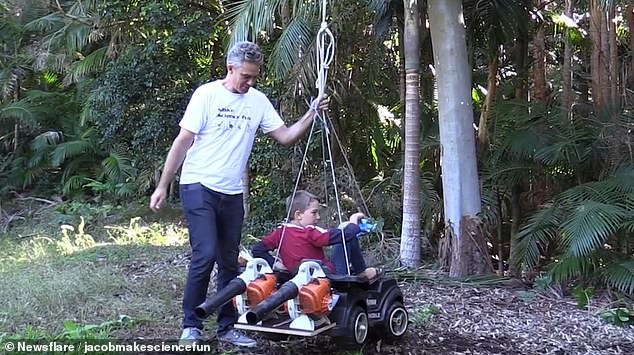 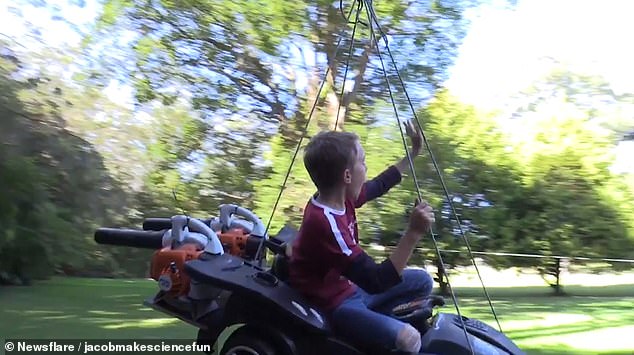 Samuel is launched into the air by the powerful blowers and, waving at those in the garden as he swings

Although the invention does appear dangerous, Mr Stricking is, in fact, a qualified science teacher who regularly invents new toys for his children.

He has in the past built a rocket using Diet Coke combined with liquid nitrogen.

In one experiment, filmed in slow-motion, the reaction was enough to leave him on his backside as the coke bottle blasted off with a trail of vapour all that remained behind.

The qualified mechanical engineer also once attached three lawn mowers to the back of his son’s solar-powered go-kart to more efficiently cut the grass.