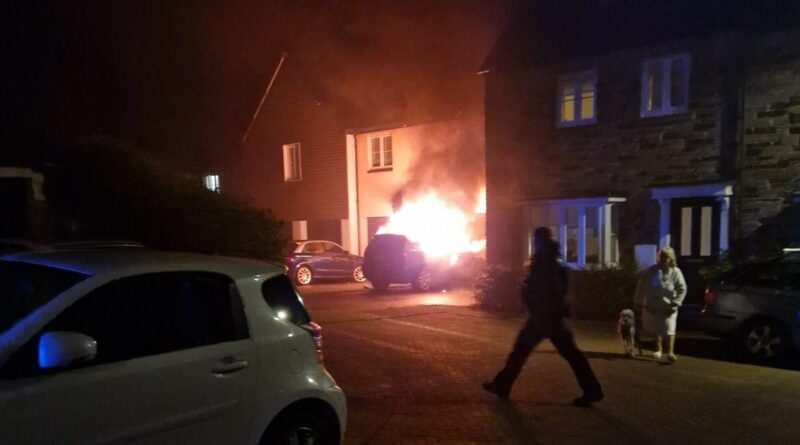 Shocking CCTV shows a man dousing petrol over a car and setting it on fire just inches away from a children's bedroom and a gas main.

Dad-of-two Ryan Bull, from Truro, woke up to a strange "popping" sound outside his house in Cornwall on Sunday morning (September 4) and saw his BMW burning in red flames.

His CCTV outside the house caught a man walking around the back of his car and dousing it with petrol before setting it alight.

The fire sets a bright flash that instantly obscures the security camera and the man is seen fleeing the scene right after. Ryan recalled the moment and told Cornwall Live: "I was just nodding off when I heard the sound, and my car was ablaze.

"I didn't try to extinguish it myself, not a chance, my car was exploding.

"It was right next to the kid's bedroom, how the house didn't catch fire I do not know.

"The gas mains to my property are less than a foot away from the car which had been covered in petrol and set fire to." He grabbed his two children, aged five and seven, and fled his house via a back door.

Despite the damages, he was lucky that the flames did not spread to the house.

"Had it gone wrong, with the high wind that night, the flames could have spread to the house. It was terrifying for me, let alone for my five and seven-year-old," he added.

A spokesperson for Devon and Cornwall Police confirmed that a man from Truro in his 20s was arrested on suspicion of arson with intent. The man has since been bailed until September 30. They said: "Police are investigating a suspicious car fire in Truro. The BMW was set alight in Beechwood Parc around 2.05am on Sunday September 4.

"Police and the fire service attended. Several nearby properties were evacuated.

"The car was destroyed by fire and fire damage was caused to the paintwork of the owner’s home. The fire also caused cracked windows in the house. No one was injured.

"The fire is being treated as arson."