‘An 8 is a midway point between 9 and 7’: Education Secretary Damian Hinds struggles to explain ‘complicated’ new GCSE grading in car crash interview

Sweeping GCSE reforms in England have seen traditional A* to G grades replaced with a 9 to 1 system, with 9 the highest mark.

But not everyone understands them yet, with Education Secretary Damian Hinds struggling to explain the new system to LBC radio host Nick Ferrari today.

Mr Ferrari spent an awkward two minutes of his show trying to understand what has changed, with a grade 7-9 now being roughly equivalent to the old A-A*.

And Mr Ferrari broke down in laughter when Mr Hinds said 8 was ‘the midway point between the 9 and the 7’, telling him: ‘Yeah, I get that, minister!’

Mr Hinds also told him later on in the show that ‘9 is the top’, leading Mr Ferrari to reply: ‘Well, respectfully, I’d worked that out, thank you.’ 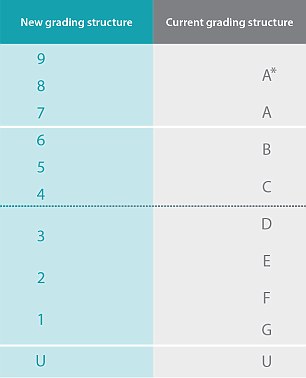 But Mr Ferrari struggled to understand some of the other grades, asking Mr Hinds: ‘If 6 is a B, and 4 is a C, then what the hell’s 5?’

Mr Hinds replied: ‘This is… we link these things at C to a 4 and A to a 7, and then between those it’s arithmetic, between those two grades, that’s how it’s done.’

Their exchange comes amid reforms in England designed to toughen up GCSEs with the introduction of a new 9-1 grading system, replacing A*-G grades.

There is less coursework in new GCSEs and students take exams at the end of the two-year courses rather than throughout. 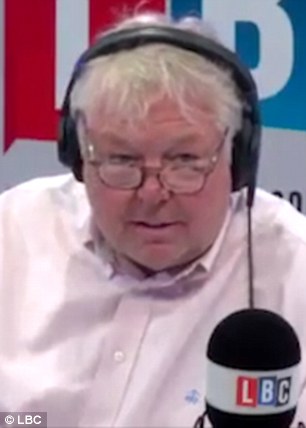 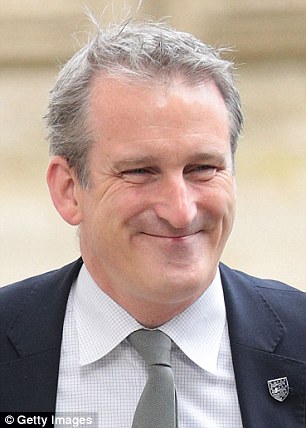 Nick Ferrari (left) spent an awkward two minutes of his show speaking to Damian Hinds (right) to understand what has changed, with a grade 7-9 now being roughly equivalent to the A-A*

The vast majority of entries in England were for the new-style GCSEs this year, with 20 subjects, including the sciences and history moving over to the new system.

What has changed in the GCSE reforms?

Under sweeping GCSE reforms in England, traditional A* to G grades have been replaced with a 9 to 1 system, with 9 the highest mark.

Grade boundaries are set by exam boards after marking, to take account of how demanding the papers were.

There is also less coursework in the new GCSEs and students take exams at the end of the two-year courses rather than throughout.

They join English and maths, which were awarded numerical grades for the first time last summer.

A smaller proportion of entries were awarded a grade 9 this summer – the new highest grade, compared with A* under the old system.

Also today, Mr Hinds echoed Ofqual’s assurances that pupils who had taken the tougher new exams would not be at a ‘disadvantage’.

Writing in the Daily Telegraph, he said: ‘To make sure that pupils who take the new GCSEs are not at a disadvantage when compared to those who went before, the independent qualifications regulator Ofqual uses a statistical method called ‘comparable outcomes’.

‘This ensures that broadly the same proportion of pupils will pass, and reach the equivalent of an A grade as in previous years, assuming the ability profile of the pupils is the same.

‘But there is greater differentiation for higher-achieving pupils, with more grades above the ‘standard pass’ level of grade four. This means not as many pupils will get the very highest grade (nine) as previously got an A*.’

DAMIAN HINDS: ‘A* will roughly be around an 8 under the new system. So the 7 is directly linked to an A.’

DH: ‘Not directly, we have a very complicated formula for how you calculate what a 9 is.’

DH: ‘It’s a new grade totally, so there’s more distribution at the top grades, which again was something demanded by the universities. And then the 8 is the midway point between the 9 and the 7.’

DH: ‘This is… we link these things at C to a 4 and A to a 7, and then between those it’s arithmetic, between those two grades, that’s how it’s done.’

DH: ‘The regulator, but what you need to know is 9 is the top, about 5 per cent of the population…’

NF: ‘Well, respectfully, I’d worked that out, thank you.’

DH: ‘And about 20 per cent will be getting 7, 8 and 9 or so. It often depends on the subject as well about what proportions…’

NF: ‘Some poor kid gets a 1 this morning, what the hell does that mean – they may as well have not turned up?’

DH: ‘Well they would have had a G under the old system, so you could have made the same argument then. And we want young people to get, particularly maths and English…’

NF: ‘You’re not going to say it’s more complicated than that, are you?’

DH: ‘You don’t need to get into all this. The key thing is that people know and do understand how the system works – 9 at the top, 1 at the bottom.’