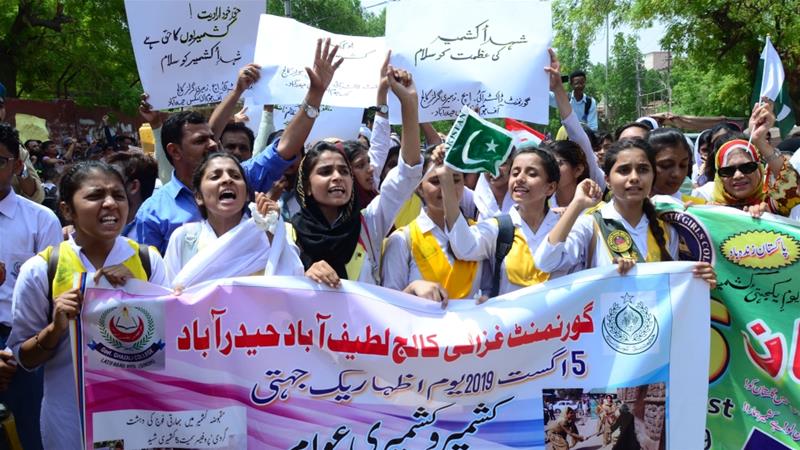 The Indian government’s decision to abolish a special status for India-administered Kashmir has been widely criticised and opposed, as tensions prevail over the constitutional autonomy of the disputed region.

Monday’s announcement sparked chaotic scenes in parliament, with opposition politicians condemning the presidential decree revoking Article 370 of the constitution that gives the state of Jammu and Kashmir a substantial degree of autonomy.

The main opposition Congress party described the decision as a “catastrophic step”.

“Shameful that you have turned Jammu and Kashmir into a non-entity,” said Ghulam Nabi Azad, a Congress parliamentarian who comes from India-administered Kashmir.

One legislator from Kashmir-based Peoples Democratic Party tore up a copy of the Indian constitution before being reportedly removed from the chambers by parliamentary marshals.

The decree, which was issued hours after imposing a major security clampdown in the disputed region, said the measure came into force “at once”.

Political leaders in India-administered Kashmir, including former chief ministers Mehbooba Mufti and Omar Abdullah who have been placed under house arrest, also criticised the decision.

“The Indian government’s unilateral and shocking decisions today are a total betrayal of trust that the people of Jammu and Kashmir had reposed in India when the state acceded to it in 1947,” Abdullah said in a statement.

The decree, which he called an “aggression”, will have “far-reaching and dangerous consequences,” said Abdullah. “A long and tough battle lies ahead. We are ready for that.”

Mufti tweeted that the latest move was the “darkest day in Indian democracy”.

“Unilateral decision of GOI [government of India] to scrap Article 370 is illegal and unconstitutional which will make India an occupational force in J&K [Jammu and Kashmir],” she posted.

However, BJP politicians and right-wing allies welcomed the decision and congratulated Modi, who had proposed to abrogate Article 370 in his election campaign.