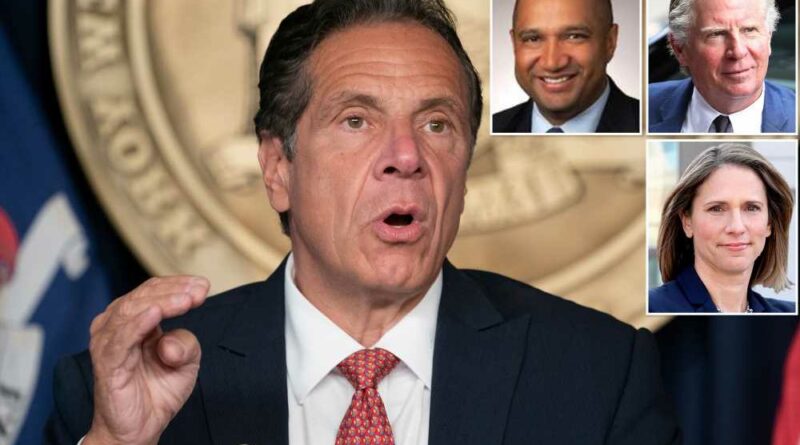 Here are the Democrats jockeying to succeed Gov. Cuomo if he resigns

The probes will apparently target Cuomo’s behavior at his satellite office in Manhattan and his former home in Mount Kisco where he lived with his then-girlfriend, celebrity chef Sandra Lee.

Westchester DA Mimi Rocah also issued a statement saying, “As some of the Governor’s conduct described in the report occurred in Westchester County, we have formally requested investigative materials obtained by the AG’s Office.”

The announcements followed a Tuesday night interview in which Albany DA County David Soares said he’d launched a probe and urged any potential victims to cooperate with his office, saying that “we will conduct our investigation as discreetly as possible.”

Soares also told NBC Nightly News anchor Lester Holt that James’ 168-page report had “led myself and other prosecutors with concurrent jurisdiction to believe that criminal activity in fact had taken place.”

The most serious allegation made against Cuomo involves a Nov. 16 incident in the Executive Mansion in Albany, where he’s accused of putting his hand under the shirt of a female aide and grabbing her breast over her bra.

“I mean it was — he was like cupping my breast. He cupped my breast,” the unidentified woman said in sworn testimony to investigators, according to James’ report.

The report details another incident during which the three-term Democrat allegedly touched a female state trooper “in an unwelcome way” while she and a state police investigator — both of whom were members of the governor’s security detail — were escorting him to his office at 633 Third Ave.

While they “were riding the elevator up, the Governor placed his finger on the top of [the trooper’s] neck and ran his finger down the center of her spine midway down her back, and said to [her], ‘Hey, you,’” according to the report.

A former aide, Lindsey Boylan — whose allegations touched off the harassment scandal engulfing Cuomo, 63 — also accused him of “having kissed her at the close of a one-on-one meeting” inside his 38th-floor office.

“Specifically, as Ms. Boylan walked by the Governor to leave, he stepped toward her and kissed her on the lips. Boylan said she was shocked by the kiss, said nothing, and just kept walking,” according to the report.

The trooper told investigators that one of Cuomo’s first “inappropriate interactions” with her took place outside his then-home in Mount Kisco in September 2018, according to the report.

The woman mentioned that she was going to Albany for her sister’s wedding the following weekend, prompting Cuomo to offer her a tour of the Executive Mansion “unless it [was] against protocols,” the report said.

Cuomo then “snickered” and walked away, leaving the trooper “uncomfortable” due to his “suggestive” remarks, according to the report.

During another incident in the summer of 2019, the trooper said she was stationed outside the house when she approached Cuomo in the driveway and asked if he needed anything.

Cuomo allegedly responded, “Can I kiss you?”

The trooper testified that she froze up and worried about how to “say no politely” without incurring Cuomo’s wrath before reluctantly telling him, “Sure,” according to the report.

“The Governor then proceeded to kiss [her] on the cheek and said something to the effect of, ‘oh, I’m not supposed to do that’ or ‘unless that’s against the rules,’” the report said.

In mid-to-late-October 2019, Cuomo allegedly asked to kiss the trooper again while she was seated in the driver’s seat of a state police car outside an event at Columbia University’s Low Memorial Library in Upper Manhattan.

Following advice from a friend, she told Cuomo she was sick, leading him to look at her “almost in disgust that [she] had denied him” and walk away, according to the report.

In a video statement released Tuesday, Cuomo repeated his claim that “I never touched anyone inappropriately or made inappropriate sexual advances,” and suggested he was the victim of a smear campaign.

“Politics and bias are interwoven throughout every aspect of this situation. One would be naive to think otherwise. And New Yorkers are not naive,” he said.